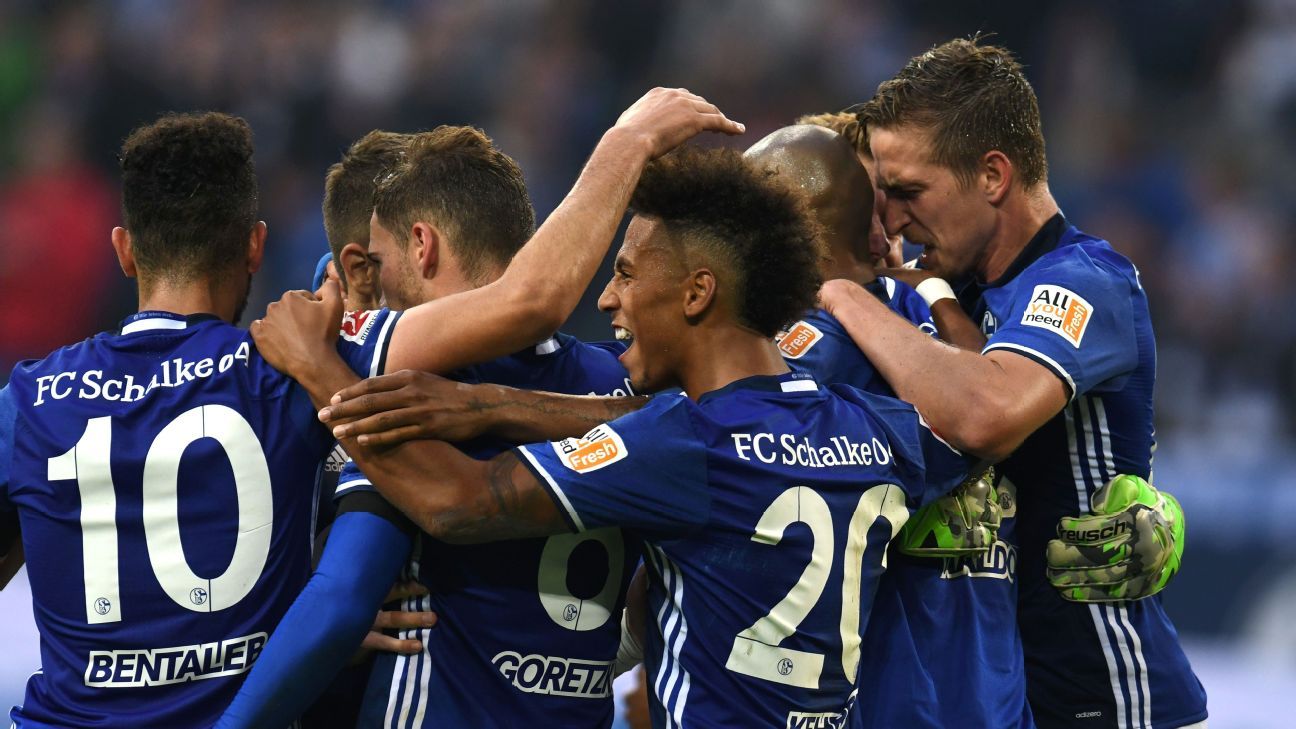 
Halfway into the first 45 minutes of Schalke 04’s opening home game, stadium announcer Dirk Oberschulte-Beckmann addressed the crowd with an urgent message: somebody had left their automobile improperly placed in the car park. “Listen matey, I don’t know what’s up with you,” Oberschulte-Beckmann said in the typically blunt language of the Ruhr area. “The motor’s still on, the key is in the ignition. Get in touch with us!” The whole Veltins-Arena was in stitches.

That funny little mishap later came to serve as an almost perfect metaphor for the Royal Blues’ superb start to the 2017-18 Bundesliga campaign. On Saturday, Schalke 04 showed the same urgency as the unknown driver to get down to business and hit the road running, hard and early, impressively revved up. Their 2-0 win over last year’s runners-up RB Leipzig was a testament to the rapid improvement under new coach Domenico Tedesco.

“Last season, most of the team had attempts at progress were in vain,” said local paper WAZ. “Schalke moved in retrograde, making one step forward and two steps back. But now it seems that they’re heading in the right direction: forward.”

It was only the first game of 34, of course, but the manner of the performance — a fine combination of astute tactics and spirited devotion against one of the best sides in the country — understandably got the S04 faithful hugely excited. They have spent the best part of this decade forlornly glancing at the success of rivals Borussia Dortmund while one after another, many supposed saviours on the bench turned out to be duds. Yet Tedesco, only 31 years old and bereft of any top-flight experience until now, looks and feels like the real deal.

Schalke withstood Leipzig’s considerable pressure thanks to precise movement of the defensive lines and choreographed counter-attacks that visibly accelerated their play in the final third. Nabil Bentaleb’s penalty (1-0, 43rd minute) and a strike from Ukrainian winger Yevhen Konoplyanka (73rd minute) rewarded the home side for their coordinated, committed effort.

Tedesco humbly forwarded all praise to his team, calling the result “a mental triumph.” Still so young for the high-stakes job, he’s perhaps understandably careful to downplay his own input. Sporting director Christian Heidel, who appointed the German-Italian after a failed experiment with Markus Weinzierl last season, is no doubt about the new coach’s impact, however, noting that the players have suddenly started showing “an interest in tactics.”

It won’t be too long before the public in Gelsenkirchen will wonder whether Tedesco, who hasn’t had a significant playing career and had only 11 matches in professional football as coach of second division Erzgebirge Aue before getting the Schalke job, is the next managerial wonder-kid discovered by Heidel, who famously mentored Jürgen Klopp and Thomas Tuchel at Mainz 05.

Tedesco is certainly not afraid to make unpopular decisions. Long-serving captain (and World Cup winner) Benedikt Höwedes was demoted and benched for the Leipzig game in light of his problems dealing with high-pressing opponents. Höwedes has reacted professionally — he gave a rousing team-talk ahead of kick-off — but Tedesco knew that he’d put himself in the firing lane in case of a bad scoreline. The convincing showing has proved his point: mundane match considerations should be more important than dressing room politics.

Schalke’s squad isn’t nearly as powerful as Borussia Dortmund’s and FC Bayern’s but unlike the two league leaders, the Royal Blues can prepare from week to week without European distractions. Tedesco’s academic approach should thrive with the help of so much time to revise and refine.

In the all-important race for third (and fourth) place, Schalke have taken early pole position. It’ll be exciting to see just how far the positive momentum and their new coach’s steering skills can take them.

Over at Dortmund, Peter Bosz also enjoyed a very satisfying debut in Germany’s top flight. His Borussia Dortmund team — sans striking, AWOL Ousmane Dembele — crushed a sorry VfL Wolfsburg 3-0 at the Volkswagen Arena. The Lower Saxons’ resistance was so meek that it’s hard to estimate the true brilliance of the Black and Yellows, but a raft of very fine individual performances were hugely encouraging.

Mario Gotze, back after an eight-month lay-off, was great in a deeper role that had BVB CEO Hans-Joachim Watzke reach for a comparison with Andres Iniesta. Further up the the field, Christian Pulisic stole the show. The U.S. international moved with a sense of purpose and precision that had one or two local observers wondering if Barcelona hadn’t targeted the wrong attacking midfielder in Borussia colours.

On the whole, Bosz’s team were a delight to watch.

Bayern win too but show a little weakness

Bayern were just as easy on the eye in their opener, albeit only for the opening 18 minutes. Goals from new boys Niklas Süle and Corentin Tolisso (as well as a VAR-assisted penalty from Robert Lewandowski in the 53rd minute) seemed to have made the Friday night curtain raiser a non-contest but Bayer 04 Leverkusen came back to register a consolation goal, via Admir Mehmedi, and nearly got a lot more as the Bavarians’ defence crumbled under the weight of complacency.

Friday’s curtain-raiser suggested that there could well be hope for the opposition this season.

Not everyone benefits from VAR

It’s fair to say that the introduction of video technology didn’t go quite as smoothly as anticipated. VAR did help the referees at the Bayern game and at Hertha’s 2-0 win over Stuttgart make two right decisions in relation to penalty appeals, but the system was unable to produce the digital lines needed to review tight offside calls and failed to work altogether in some cases.

Augsburg’s coach Manuel Baum, for example, was rather upset that there was no functioning VAR in Hamburg’s Volksparkstadion, and thus no chance to look at a decent penalty shout for the visitors. Nicolai Müller’s solitary strike after eight minutes thus secured the first matchday one win for the northerners in seven(!) seasons. Just in case there were fears that Hamburg SV might for once turn in a competent campaign, the win was immediately overshadowed a rather unfortunate incident: Müller landed so awkwardly after his airborne goal-celebration that his cruciate ligament gave way.

The German international will be out of action for roughly eight months.