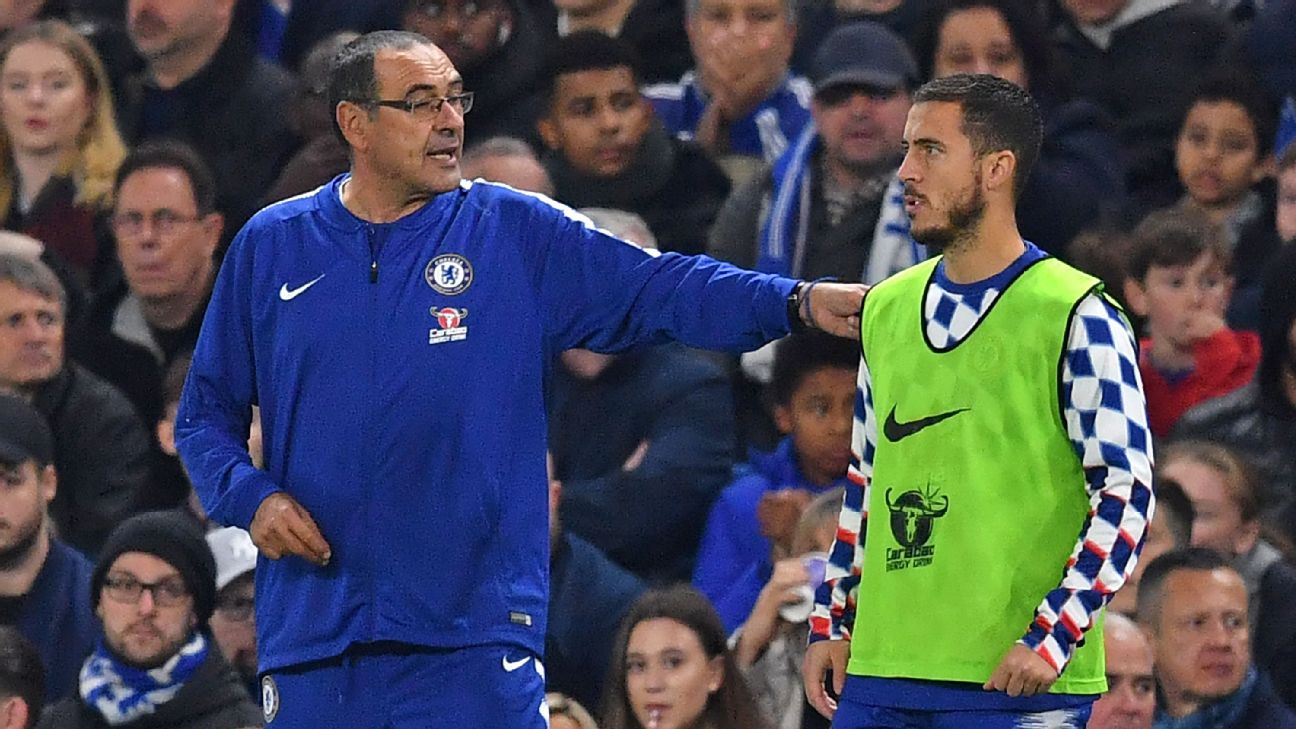 
Maurizio Sarri said Chelsea will not keep Eden Hazard against his will as the club brace themselves for an official approach from Real Madrid to sign the winger this summer.

Sources told ESPN FC this week that Chelsea fear there is nothing they can do to prevent Hazard becoming a Madrid player this summer, after the Spanish giants moved to re-appoint his childhood idol Zinedine Zidane as coach.

Speaking in a news conference ahead of Chelsea’s clash with Dynamo Kiev in the Europa League round of 16, Sarri insisted he is not dwelling on the uncertainty surrounding Hazard’s future but reiterated that he will respect the Belgian’s decision.

Asked if Zidane’s return to Madrid makes Hazard’s exit this summer more likely, Sarri replied: “You have to ask Hazard, I think. I did not speak to Eden about Zidane. I am not worried. You know very well my opinion — I only want players that want to play for Chelsea.”

Chelsea’s confidence of keeping Hazard has been receding for months, with the Belgium international having made no attempt to hide his attraction to Madrid while spurning Chelsea’s attempts to reopen talks over a contract extension that would make him the highest-paid player in their history.

Hazard was included in Chelsea’s 21-man travelling party to Ukraine despite playing the full 90 minutes in Sunday’s 1-1 draw with Wolves at Stamford Bridge, but Sarri confirmed that striker Gonzalo Higuain has has been left in London.

“He had fever after the Premier League match [against Wolves] for two days, so yesterday we decided to leave him at home to recover for the next match,” Sarri said of Higuain.

Chelsea take a commanding 3-0 lead into Thursday’s second leg in Kiev, but Sarri refused to guarantee that unsettled academy prospect Callum Hudson-Odoi — who came on as a substitute to score his team’s third goal at Stamford Bridge — will be picked to start.

“I have a lot of players,” Sarri explained. “I know that for you Hudson-Odoi is the best, but for me I want to see them all at the same level.

“Hudson-Odoi is doing very well for the last period, he will be in the 18, but I don’t know [if he will be] on the pitch.

“I want to send the message to the team that the match is very important. I don’t want to make a mistake in this. Maybe, as you know in the last match Hudson-Odoi was the first change, so you know he is in my mind for every match.”