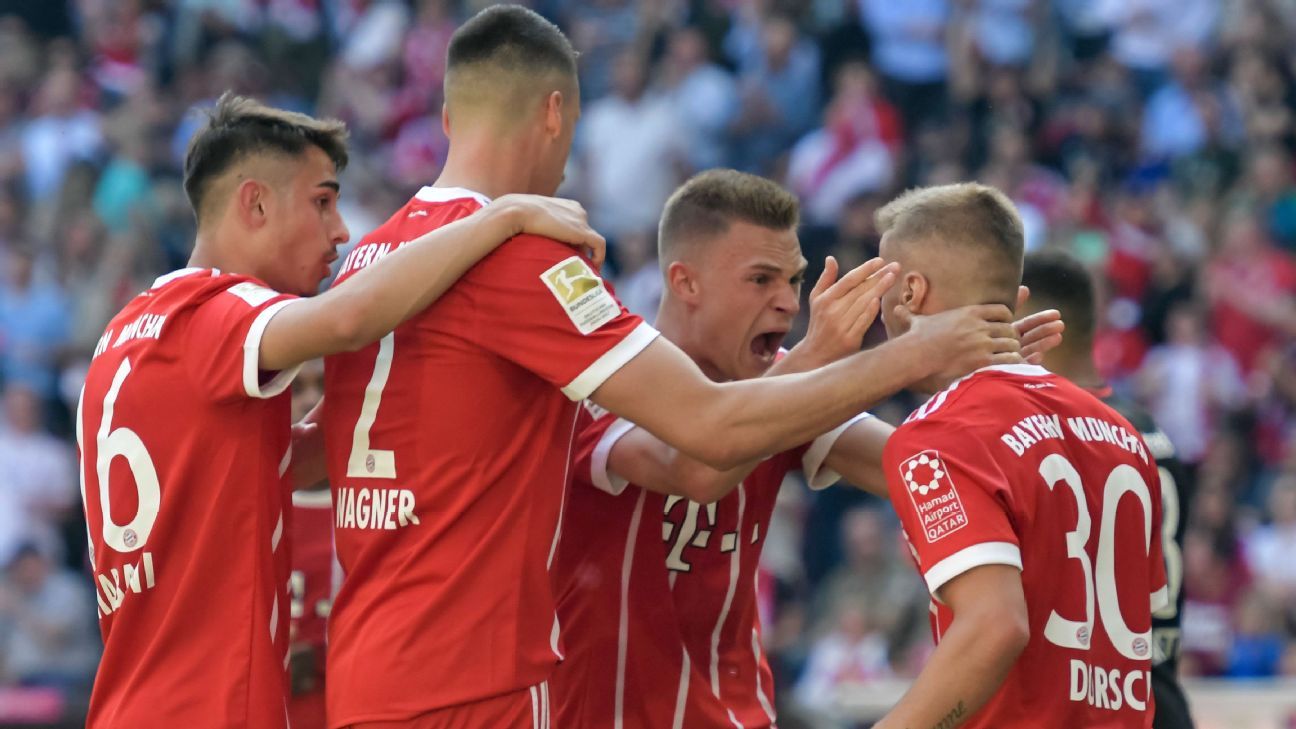 
An experimental Bayern Munich eleven eased past hapless Eintracht Frankfurt 4-1 on Saturday courtesy of goals from debutant Niklas Dorsch, Sandro Wagner and substitutes Niklas Sule and Rafinha, with Sebastien Haller scoring a consolation for the visitors.

Resting key players and fielding their youngest Bundesliga team since 1971 with the Champions League trip to Real Madrid in mind, Treble-seeking Bayern warmed up with another win, with a few relative unknowns putting in a good audition in front of next season’s coach Niko Kovac watching from the opposition bench.

None. After losing Arjen Robben, Javi Martinez and Jerome Boateng to injury in midweek, there are no fresh concerns ahead of the return.

GK Sven Ulreich, 8 — A brilliant save from the onrushing Luka Jovic kept Bayern on level terms and Dorsch soon went up the other end and opened the scoring. Bayern’s backup keeper has been the difference so often this season in the Bundesliga.

DF Juan Bernat, 5 — Gave the ball away too frequently in another uninspiring performance.

DF Lukas Mai, 7 — Buoyed by signing a new professional contract, the talented U19 captain impressed at the heart of Bayern’s defence.

DF Mats Hummels, 8 — Captain for the day and there were shades of Franz Beckenbauer, elegantly galloping forward into space with purpose and grace on his regular forays from the back.

DF Joshua Kimmich, 7 — Bayern’s midweek goal scorer put in a decent 45-minute shift before being given a breather with Madrid in mind.

MF Sebastian Rudy, 6 — Another unspectacular display but did manage to pick out the waiting Wagner for the second goal.

MF Corentin Tolisso, 6 — Missed a golden opportunity to score in the second half and otherwise failed to impress. Despite injuries, Bayern’s record signing will probably have to make do with a substitute spot on Tuesday.

MF Niklas Dorsch, 7 — The 20-year-old put Bayern ahead on debut on the stroke of half-time with a routine finish. Small consolation perhaps for the reserve-team skipper missing out on a Regionalliga derby against league-leaders 1860 Munich on Sunday.

MF Meritan Shabani, 6 — The 19-year-old Kosovan-German toiled industriously on debut roaming the right-hand side of midfield, before making way for Thiago on 56 minutes.

FW Franck Evina, 7 — Bayern are used to having a Franck playing on the left, but Heynckes called up the Yaounde-born teenager Evina and not Ribery. He is certainly bulky for a 17-year-old, but the Cameroonian-German produced an energetic display, showing massive promise for the future.

FW Sandro Wagner, 8 — Hailed by Heynckes at the news conference for his “outstanding” performance, Wagner’s overtures included a fine assist for the opening goal and doubling the lead with a cool finish on 75 minutes for his eighth league goal since joining in January from Hoffenheim.

DF Rafinha, 7 — A half-time sub for Kimmich, Rafinha ran the length of the pitch to wrap up the three points with the third goal on 86 minutes for his first league goal of the season, almost as if trying to banish his awful midweek mistake from the memory bank.

MF Thiago, 7 — Replaced Shabani 10 minutes after half-time to give Bayern more finesse and stability in midfield.

DF Niklas Sule, 8 — Replaced the tiring Evina and striding forward with purpose, Sule scored with the final touch of the game with a clinical finish into the corner. His second league goal of the campaign to even out his two own goals.