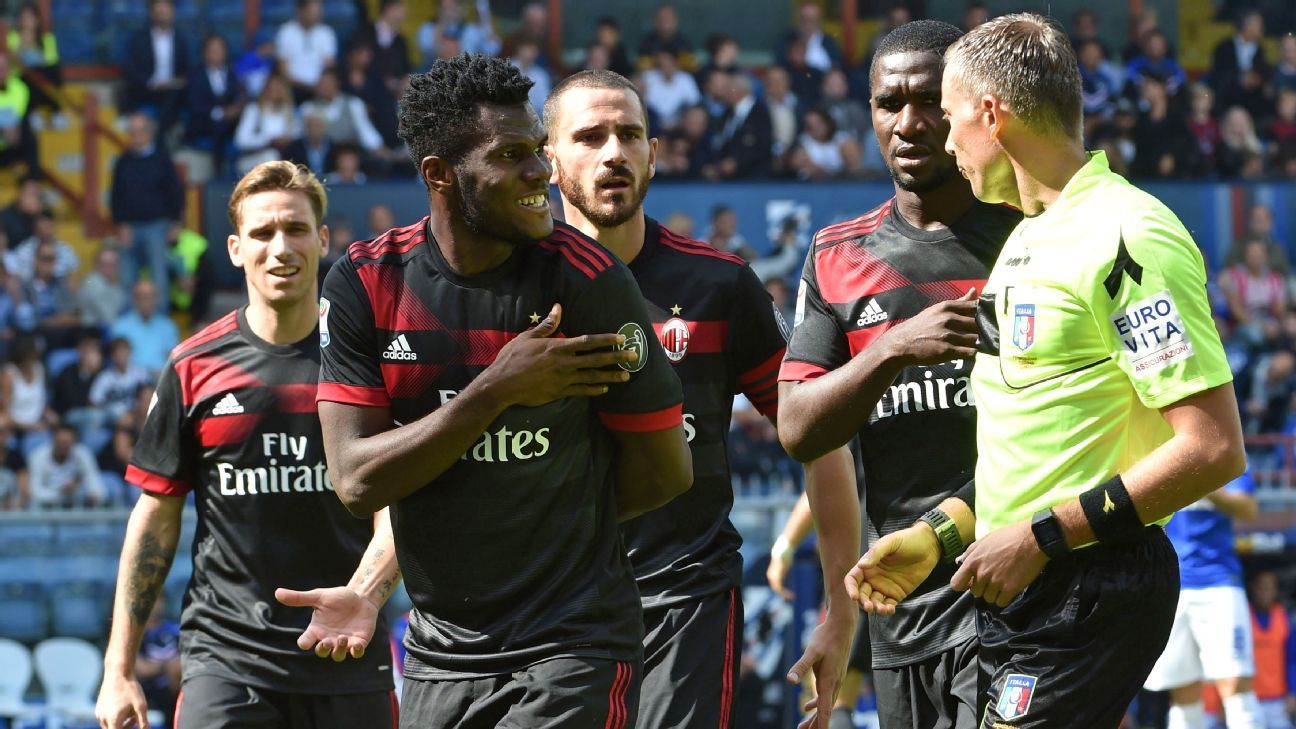 
Duvan Zapata won a family battle as he inspired Sampdoria to a 2-0 victory over AC Milan.

Striker Zapata was up against cousin Cristian Zapata, and a mistake by the Milan defender gifted him the opening goal.

Dominant Sampdoria were awarded an early penalty when a cross from Ivan Strinic hit the arm of Franck Kessie, but the referee changed his decision after reviewing the incident.

Zapata broke the deadlock in the 73rd minute and substitute Ricardo Alvarez wrapped up the win with a breakaway goal in stoppage time.

A goal three minutes from time by Danilo D’Ambrosio gave Inter Milan a 1-0 victory in a scrappy game at home to Genoa, who had two players sent off in the closing moments.

Inter had seemed all but certain to be held to a 0-0 draw when D’Ambrosio headed home from a corner with time running out.

The first dismissal came when Stephane Omeonga brought down Eder after he had been put through on goal, and one-time QPR star Adel Taarabt saw red deep into injury time for a two-footed challenge on Yann Karamoh.

Inter had got off to a slow start and were almost behind shortly before half-time when a Taarabt shot was saved, but they grew in confidence after the break and Eder was denied by a fine stop.

Remo Freuler’s stoppage-time equaliser rescued a point for Atalanta in a 1-1 draw with Fiorentina at the Artemio Franchi Stadium.

A thoroughly entertaining clash ended all square after a couple of superb goals.

Federico Chiesa put Fiorentina ahead after 12 minutes with a deft touch and thunderous finish into the top corner of the net from just outside the penalty area.

The visitors had the chance to equalise on the hour mark when Davide Astori was adjudged to have tripped Josip Ilicic, but Alejandro Gomez saw his penalty brilliantly saved by former Atalanta goalkeeper Marco Sportiello.

But four minutes into stoppage time the Viola were denied a third victory in four Serie A matches when Andreas Cornelius’ flick-on fell to Freuler on the edge of the box and his swerving shot flew into the bottom left corner of the net.

Lazio bounced back from last weekend’s heavy home defeat to Napoli with a 3-0 victory at Verona.

Ciro Immobile took his goal tally for the season into double figures with two more efforts, the second of them coming from the penalty spot, while Adam Marusic was also on target.

Roberto Inglese and Mariusz Stepinski scored at Cagliari to give Chievo their first win since the opening weekend.

The hosts played the final seven minutes with 10 men after Fabio Pisacane had been sent off.

Crotone won the battle between the bottom two teams as goals either side of half-time from Rolando Mandragora and Marcus Rohden gave them a first league victory of the season against Benevento.

It was enough to move them out of the bottom three, but Benevento remain at the foot of the table and are yet to win a point.

Bologna won for the first time in four league games and for only the second time this season as they overcame Sassuolo 1-0.

A close game swung the way of the visitors following Francesco Magnanelli’s red card after 80 minutes and the 10 men of Sassuolo were beaten by Orji Okwonkwo’s late goal.