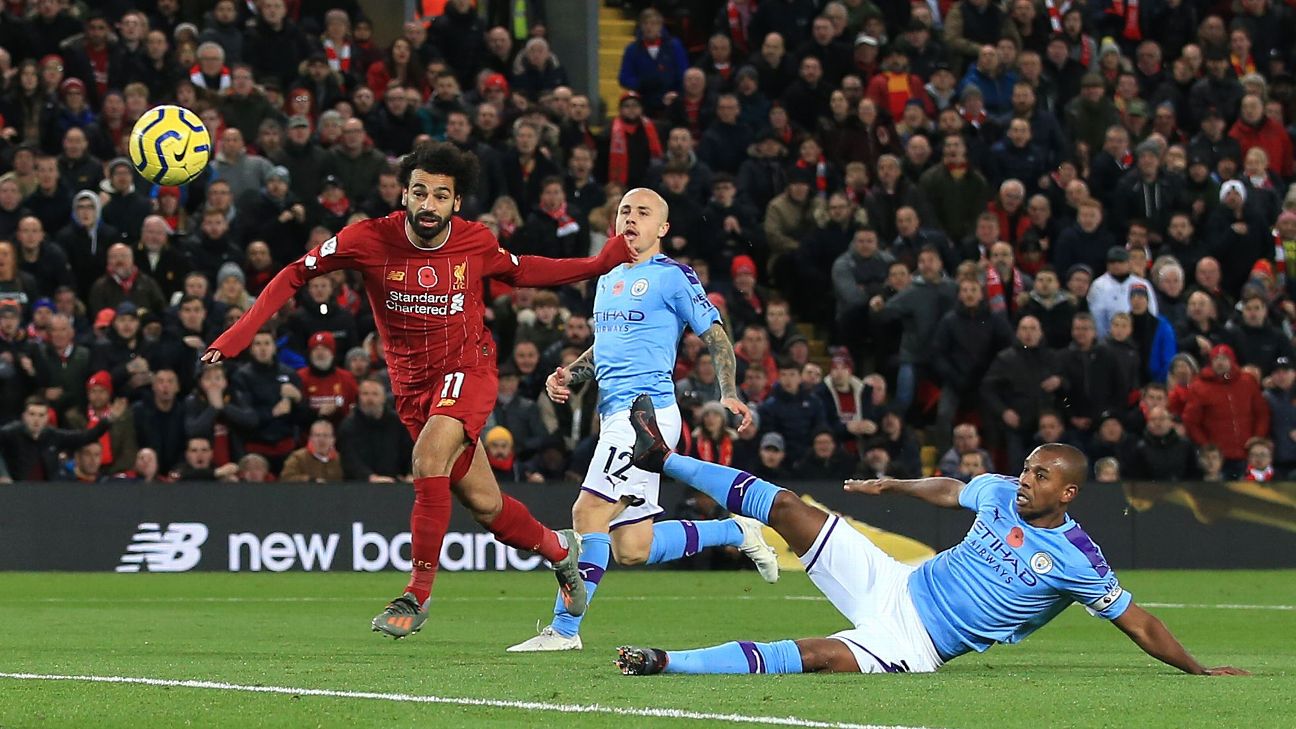 Liverpool ran out convincing winners over Manchester City to extend their lead to eight points at the summit of the Premier league table. In an early test of Liverpool’s title credentials, Jurgen Klopp’s side rose to the occasion, winning 3-1 to make their biggest statement yet this season.

The home side took the lead thanks to an early Fabinho thunderbolt, that beat Claudio Bravo at his near post. Not long after, Liverpool made it two, with a wonderful Andy Robertson cross picking out Mohamed Salah at the back post. It was three just after the break, with Mane heading home from close range, to cap off a wonderful — and potentially season defining win over the two-time defending champions.

We are all well accustomed to majestic performances from Liverpool’s front three, but today, the sides often maligned midfield was sensational. Georginio Wijnaldum was crucial in linking the midfield and attack, Henderson ran Angelino ragged alongside Salah, while Fabinho put in a MOTM performance on the biggest stage of all. Furthermore, after some recent struggles, Salah’s spectacular return to form will come as a huge boost to Jurgen Klopp.

Defensively, Dejan Lovren and Trent Alexander-Arnold were caught out positionally on one or two occasions, with their blushes only spared by some wayward finishing. Likewise, Liverpool did struggle to keep hold of the ball in the first half, but in the grand scheme of things, both frailties are relatively insignificant.

8 — The German manager’s selections were true to form, with Salah’s return to fitness coming as a welcomed boost. However, Klopp’s decision to not start the in-form Alex-Oxlade Chamberlain could well have backfired. As it happened, the selection was spot on, with Fabinho stepping up to score a Chamberlain-like goal from long range.

Player ratings (1-10; 10 the best, players introduced after 70 minutes get no rating)

GK Alisson, 7 — The Brazilian made a series of good saves and solid punches throughout. Could do little about City’s late goal, with Bernardo Silva‘s strike into the bottom corner just out of his reach.

DF Trent Alexander-Arnold, 7 — Week after week, the young Englishman continues to amaze fans and pundits alike with his skillful passing range, and intelligent interplay. However, the right-back was pulled out of position on a couple of occasions, and did have a few handball appeals go in his favour.

DF Dejan Lovren, 7 — While generally performing well, the Croatian did experience one or two hairy moments when facing up to Aguero, whom he struggled to contain — not for the first time. However, up against one of the best attacks in Europe, he did hold his own.

DF Virgil Van Dijk, 7 — The towering Dutchman was integral in helping to keep City at bay in the first period. Whenever a cross was played into Liverpool’s penalty area, more often than not, it was Van Dijk dealing with it admirably. An assured display.

DF Andrew Robertson, 8 — Liverpool’s full-backs continue to stake their claim as the best pairing in the world, after another terrific display. Robertson, unlike Alexander-Arnold, was superb in attack and defence, assisting Salah for the second goal of the game, while also contributing with crucial tackles and interceptions.

MF Fabinho, 8 — The scorer of Liverpool’s first goal, the Brazilian international was inspired at the base of Liverpool’s midfield. His strike was sublime, but in addition to that, he provided vital interceptions, as well as pinpoint passing under pressure.

MF Jordan Henderson, 8 — The skipper at times appeared to assume the role of a right-winger, making a series of runs forward in an attempt to overwhelm Angelino. This paid off tremendously in the second half, as Henderson contributed with a fine cross to assist Mane’s goal.

MF Georginio Wijnaldum, 7 — Alongside Henderson, Wijnaldum played a vital role in linking the sides midfield and attack. He was intimately involved in some of Liverpool’s build-up play, and didn’t stop working until the final whistle.

FW Mohamed Salah, 9 — The Egyptian was the brightest of Liverpool’s front three, scoring a wonderful header for the side’s second, while also linking up terrifically with Henderson and Alexander-Arnold on the right-hand side. He was a persistent thorn in the side of Angelino, and on today’s evidence, Salah is back to his frightening best.

FW Sadio Mane, 8 — Back in his accustomed position on the left side of a front three, Mane was once again exceptional. Salah may ultimately steal the headlines for his eye-catching display, but the Senegalese star’s intelligent movement — which got him into a position to score his goal today, cannot go unrecognised.

MF James Milner, 6 —The experienced utility man was introduced just after the hour mark, replacing captain Jordan Henderson. He performed his role admirably, assisting Robertson in shutting down City attacks from the right side of the pitch.

MF Alex Oxlade Chamberlain, N/R — The in-form midfielder got a 10-minute runout but didn’t grab any headlines this time.

DF Joe Gomez N/R — Made a brief cameo and helped see the game out.