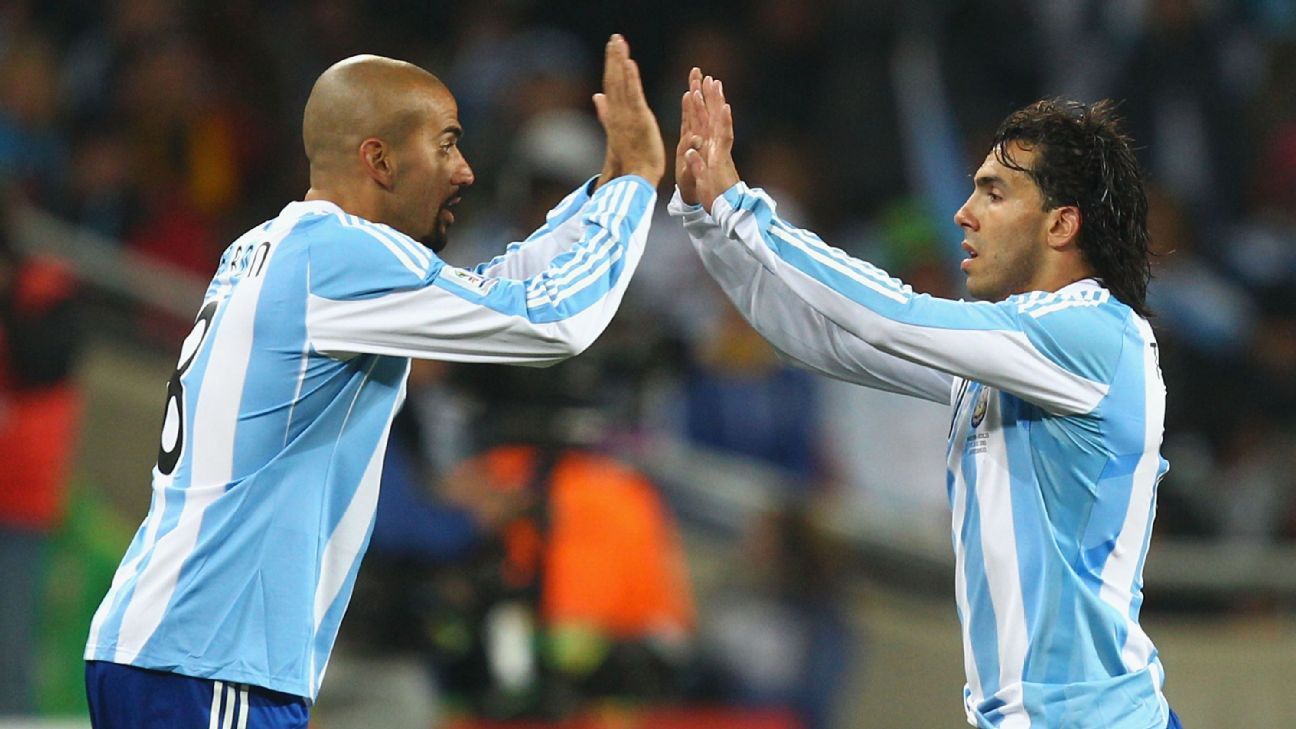 
Carlos Tevez, Juan Sebastian Veron and Dirk Kuyt have been named by hackers Fancy Bears as three of the players permitted to use otherwise-banned medicines during the 2010 World Cup.

Tevez and Veron are two of five Argentina players listed in a document which details therapeutic use exemptions (TUEs) and declarations of use of medicines for 25 players during the tournament in South Africa more than seven years ago.

The Fancy Bears have previously published details of TUEs — essentially a doctor’s note permitting the use of an otherwise-banned substance to treat a medical condition — in Olympic sports.

Tuesday’s publication of hacked data was the Fancy Bears’ first disclosure in football and drew a strong rebuke from FIFA.

“FIFA condemns in the strongest terms the publication by the Fancy Bears group of information obtained illegally, particularly personal and medical data from athletes,” the statement said.

“The release of such information constitutes a clear violation of the athletes privacy and puts at risk the ongoing fight against doping. All potential violations of the anti-doping regulations are handled by FIFA in accordance with WADA regulations.”

WADA confirmed the information did not come from its own system, which it said remains secure.

It also defended the TUE program, calling it “a rigorous and necessary part of elite sport, which has overwhelming acceptance from athletes, physicians and all anti-doping stakeholders worldwide.”

Tevez, who has played for Manchester United, Manchester City and West Ham, former Chelsea and United playmaker Veron and ex-United defender Gabriel Heinze all declared the use of Betamethasone, a corticosteroid with a variety of uses.

It does not feature directly on the World Anti-Doping Agency (WADA)’s prohibited list, but is banned dependent on the concentration detected, and is covered in section nine of the list. That reads: “All glucocorticoids are prohibited when administered by oral, intravenous, intramuscular or rectal routes.”

Former Liverpool and Netherlands forward Kuyt was revealed to have used dexamethasone, apparently for pain relief due to dentistry issue with his root channel.

Mario Gomez was one of four Germany players listed. Gomez received a TUE for salbutamol, a common asthma medication.

Former New Zealand, Blackburn and QPR defender Ryan Nelsen — listed as “Nelson” on the published form — declared the use of prednisone, another corticosteroid.

No England players were listed and there is no suggestion of wrongdoing on the part of those named, but the Football Association is still working to discover the extent of the hack.

The Russian hackers also claimed there were 160 adverse analytical findings — or positive doping tests — in 2015 in football. Of the four UK failures, three were for cocaine and one for ecstasy.

Fancy Bears first hacked WADA files in September last year. Five-time Olympic champion and 2012 Tour de France winner Sir Bradley Wiggins was forced to defend himself following the publication of his medical records, which revealed three TUEs for triamcinolone ahead of three of his biggest races in 2011, 2012 and 2013.

Wiggins insisted the use of the corticosteroid was medically necessary due to a pollen allergy that aggravated his asthma.

The latest hack includes an email from the Football Association’s head of integrity, Jenni Kennedy, to FIFA regarding four anti-doping cases in May 2017.

Zesh Rehman, then of Gillingham, received a retrospective TUE for prednisolone following a League One match with Southend in February. It was prescribed due to urticaria, or hives, which is a bumpy and uncomfortable rash.

Two cases are ongoing involving a pair of non-league players, who it is said tested positive for the anabolic steroid oxandrolone in out of competition tests.

The FA said: “The Football Association is disappointed that strictly confidential information has been released into the public domain. The details of ongoing cases cannot be discussed or disclosed until due legal process has been completed.

“In the event that an Anti-Doping Rule Violation has been committed, full details will be published on The FA website in line with The World Anti-Doping Code. Additionally, it is inappropriate to publish information relating to personal medical conditions or medications and we will work alongside our partners to ascertain the extent of this matter.”