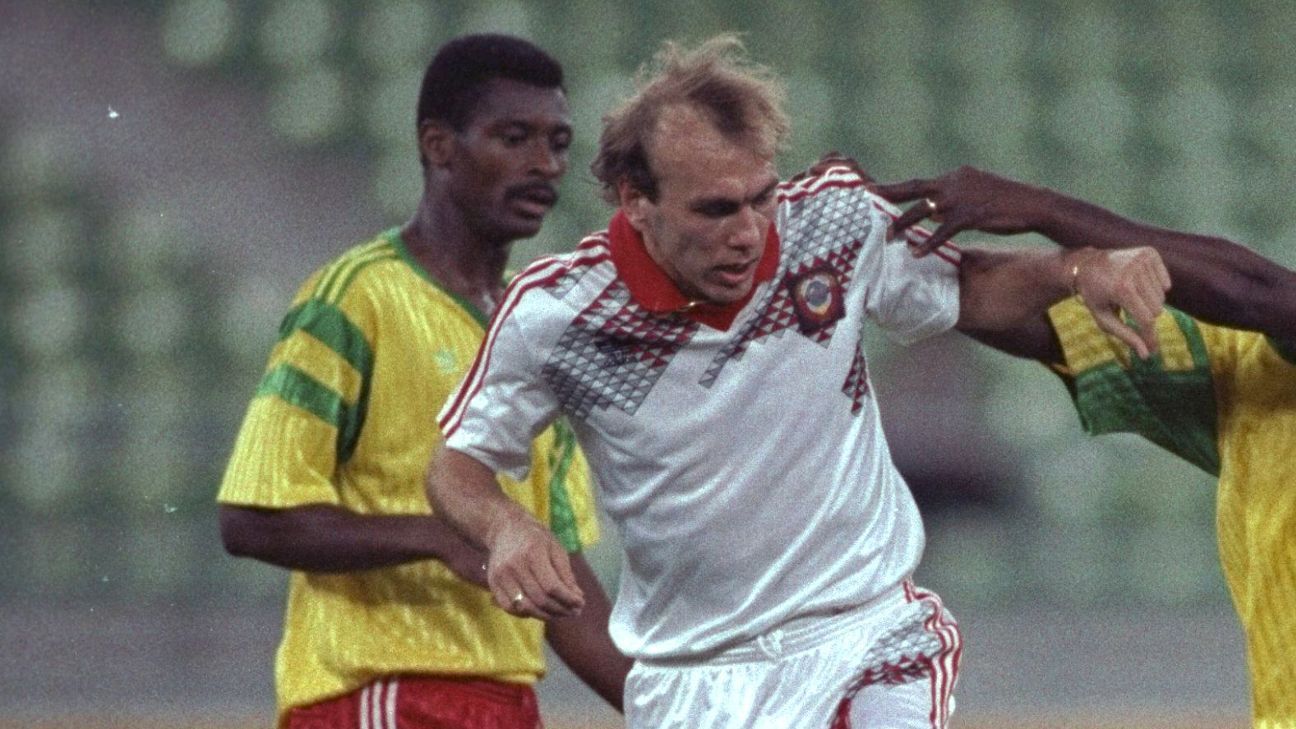 
MOSCOW — Vagiz Khidiyatullin is one of the greatest Soviet stars of the 1980s. A graceful ball-playing defender who spent the best years of his career at Spartak Moscow, he was the defensive stalwart of the team that reached the final at Euro ’88.

He also received the bronze medal at the Moscow Olympics in 1980, played at the World Cup in 1990 and was unfortunate to suffer torn knee ligaments in training just before the World Cup in 1982 (though included in the squad, he couldn’t play).

The 58-year-old Khidiyatullin now lives in the South-Western district of Moscow and told ESPN FC in an exclusive interview that he is concerned about the national team ahead of the 2018 World Cup.

Q. What did it mean to you to play for the national team?

A. I was brought up as a very patriotic person. When I played for the youth national team that won gold medals at the Under-19 European Championships in 1976 and the Under-20 World Cup in 1977, we had to sew the famous letters CCCP on the shirts ourselves. That meant a lot for young players. That makes you proud. I can’t even describe those feelings. Nowadays, players don’t have opportunity to experience them.

A. I think so. Nowadays, they are only interested in money. I remember my coaches, especially Konstantin Beskov who had always told us to think about our job. He said that we must play for the people and show positive football that pleases their eyes. That is why the stands were always full in our days. You can’t fool the fans. They know when they see real commitment. Our national team had a united dressing room of different nationalities. That is a rule of life — those who do their job wholeheartedly will get their reward.

Q. And that is not the case now?

A. No. They are not playing for the people. They can say all the right things — that they are trying their best for our country, that they are singing the anthem. But I should repeat that it’s impossible to fool the fans. The feelings were sincere in my days. I don’t think the dressing room is united these days. Players stay in their rooms with smartphones.

Q. Is that the reason behind the disappointing results of the current national team?

A. Yes, but that is only part of the story. The skills are not the same. Youth coaches were much better in the Soviet era. The school system was very well organised, but fell apart later on. [Former Russian Football Union president] Vyacheslav Koloskov tried to keep it up, but the degradation continued after he left [in 2005].

The national teams in my era were coherent, built around Valeri Lobanovsky’s Dynamo Kiev or Beskov’s Spartak. The players understood each other well. This Russia team will try to follow tactical instructions, but that is not the same.

Q. Does this team have any chance to succeed at the World Cup?

A. No, it would be like betting on a lame horse. You can get lucky, but not that much. We need all the top teams to suddenly suffer from illness. That is Russia’s only chance to reach the final. We shouldn’t have any illusions, and fans know that.

Q. Russia won the chance to host the World Cup in 2010 and had eight years to prepare the national team. What went wrong?

A. We had to build the youth sections and prepare coaches. It is too late now. Those in charge are always telling us stories, but they are lying. That is always the case with politicians everywhere.

A. We had a great team built by Lobanovsky. It definitely was one of the best in our history. But I must say in retrospect that we were not mentally ready to win the title. We had an attitude of an underdog.

Teams like Germany or Netherlands always arrive to the tournament with a mission to finish first. We, on the other hand, didn’t have such goals. We were not used to winning. If we had had a different attitude, we might not have missed that chance. Even now I feel sorry about that. I felt empty after the final match ended.

Q. Will your achievement at Euro ’88 ever be repeated?

A. Eventually we should be able to reach that level. It is incredible that such a huge country can’t produce a decent national team. The talents are here, but they are not developed. The money was invested in stadiums instead. Belgium’s Gent built a great stadium [Ghelamco Arena] for €50 million in 2012.

Here the authorities put a billion dollars in a stadium in St Petersburg. Are they insane? That is such a waste! Twelve stadiums were built ahead of the World Cup, and each costs more than 25bn roubles ($420m). What are they going to do with those stadiums in cities like Saransk? That will be a big problem after the tournament.