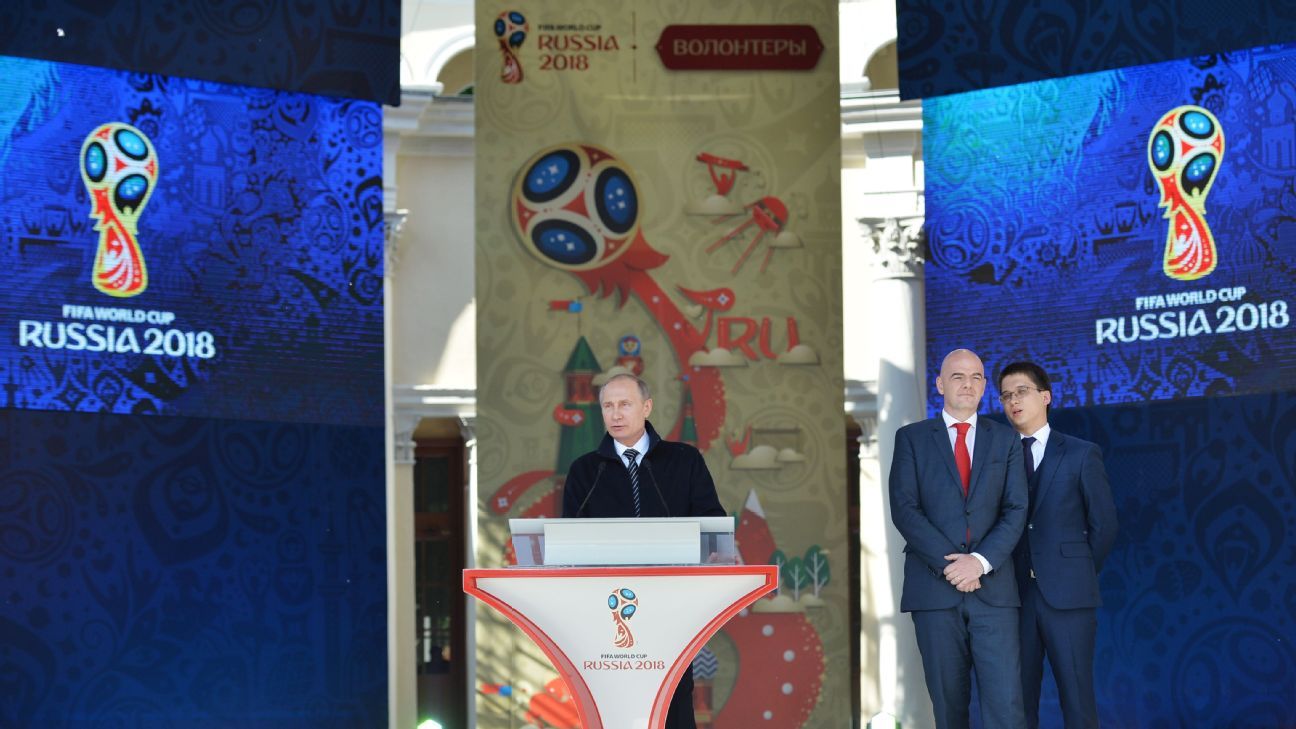 
MOSCOW — In some ways, it’s sneaking up on us. Russia 2018 is a year away, yet it feels almost subdued relative to the hype and anticipation ahead of the previous two World Cups.

A clear narrative for 2018 has not emerged. In 2010, you had Africa’s first-ever World Cup and a nation bouncing back from the ravages of racism and apartheid. Four years later in Brazil, it was about an economic boom and a World Cup coming home to the country that most defines it — 64 years after hearts were broken by the Maracanazo, Brazil’s 2-1 defeat to Uruguay in the 1950 final.

Those outside the strict bubble of football fandom need such narratives, but when it comes to 2018, we have not yet found one.

Part of the issue, perhaps, is that global media still views the world through a distinctly Western lens. The picture of 2018 has been mostly painted with a negative slant: from racism to hooliganism, homophobia to corruption. Then there’s the elephant in the room: the lingering air of authoritarianism we haven’t witnessed at a World Cup since 1978 and the Argentina junta.

To what degree any of these issues are valid and to what degree they are sensationalist media exaggerations is open to debate. But what appears obvious is that we’re all affected by the legacy of the Cold War, when the world was a binary place and you had to pick sides.

We don’t trust and we don’t understand. Russians don’t understand, for example, how some folks seize on individual incidents in an ethnically and culturally diverse nation of 144 million and broadly paint brushstrokes of the most incendiary (and lazy) stereotypes. And we don’t understand how a president who won the election by 46 percentage points could see fit to have an opposition leader arrested for “illegal public gatherings.”

Many fear the Russian bear, like they always have.

That’s the sociocultural challenge a year out. If sport is to have any kind of dimension beyond business and field-of-play competition, this has to be the goal. Building trust and dialogue — at least in a sporting and entertainment sphere — between the host nation and the rest of the world. Every World Cup host in recent decades has done it successfully. Russia needs to do it, and it needs the rest of the world to approach with an open mind, leaving the past behind.

The good news is that for five weeks in 2018, they will be the only show in town and will be presenting the world’s most popular sport. That’s not a tough sell. The not-so-good news is that Brand Russia will be teaming up with Brand FIFA to do it; while there is new leadership at the helm of the game’s governing body and those in charge say they are working hard to clean house after the scandals of yesteryear, the jury is inevitably still out and won’t be reconvening for a long while.

This is a case of a tarnished brand working with a brand which, for many, rightly or wrongly, remains scary. It’s an uphill battle.

So, too, is the race to get all the venues ready on time, although this is a familiar tale which seems to dog every World Cup. Stadiums require major infrastructure overhaul which costs (public) money that involves delays, cost overruns and sometimes violations of workers’ rights. In Saint Petersburg, there have been reports of North Korean labourers being flown in and working in conditions which even FIFA has described as “often appalling.”

We’ve been here before, and ultimately, you assume things will get done and most — if not everything — will be ready. Compared to the Sochi Winter Olympics, which were budgeted at $12 billion and ended up costing a reported $51bn, Russia 2018, at just over $10bn for a larger event spread over 12 cities, seems like a relative bargain. Still, take away the Luzhniki national stadium and, of the other 11 venues, just five will host Russian Premier League clubs: the others are fallen giants or sides who hope to use the venue to help leverage a rise up the food chain.

All of this is set against the backdrop of a nation that has seen its GDP fall the past two years and which, according to the World Bank, remains roughly where it was in 2008. World Cups are often either coming out parties for rising nations or celebrations for established economic powerhouses. Russia, in many ways, is neither.

A year removed from the 2018 World Cup, maybe we can set our aims high, but realistic, and hope that the legacy of 2018 will be a little more trust and a better understanding.

That’s not too much to ask, is it?