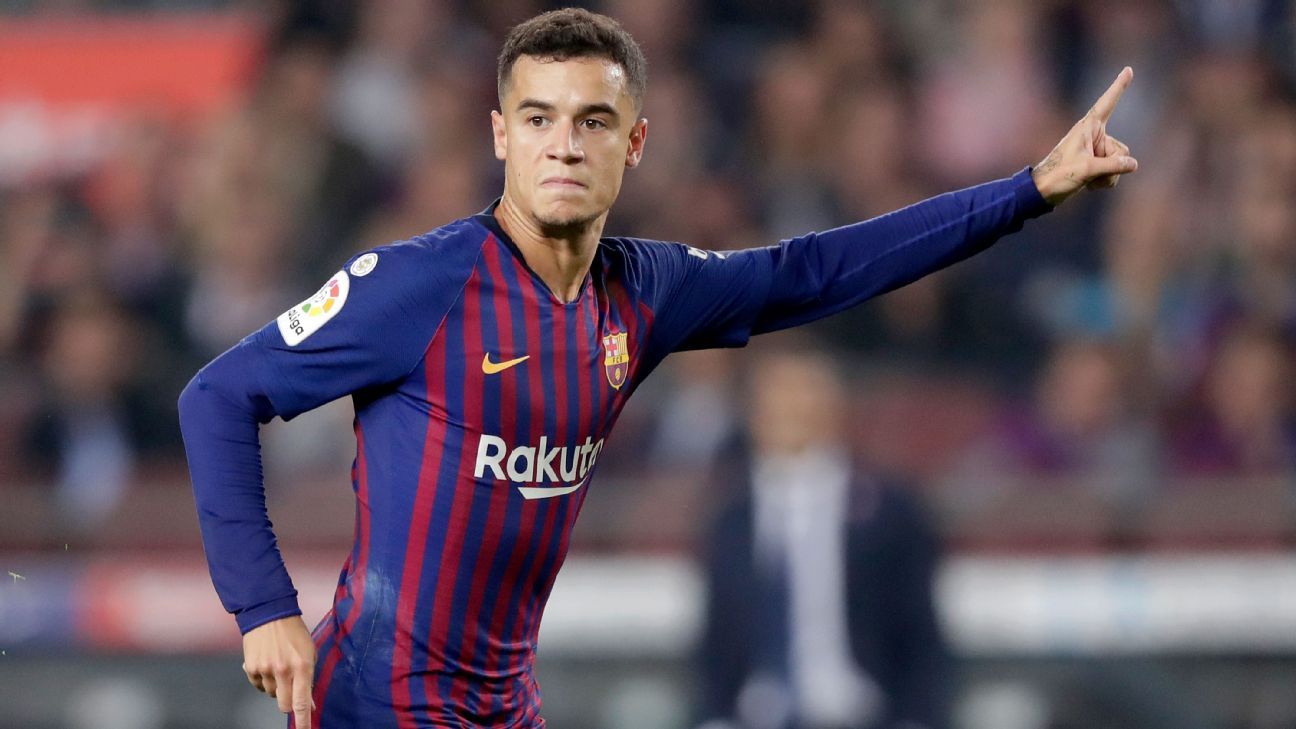 
It’s January, and the transfer window is open. Which players are likeliest to move before the window closes at the end of the month? David Amoyal rates the top rumours from around world football.

After falling behind Ousmane Dembele in coach Ernesto Valverde’s pecking order, Coutinho is reportedly unhappy with the reduced playing time. This situation seems to be of great interest to Manchester United, who reportedly already sent out feelers to assess the feasibility of a deal and to make their interest manifest to the player’s agents. However, a deal looks rather unlikely in January, since the Blaugrana would want more than €100 million to even consider the departure of the crown jewel of their transfer campaign last winter.

There’s a lot of momentum for a reunion between the Argentine striker and his former manager Maurizio Sarri. Higuain has made it clear that he wants a change of scenery in the January window, and Rino Gattuso seemed to echo as much after the match against Sampdoria over the weekend (though the manager professed confidence on Tuesday that Higuain is focused on his current club). Milan would need to find an adequate replacement to keep them in the race for a Champions League spot, and Juventus, who still own Higuain’s rights, are pushing to get some sort of guarantee that Chelsea will keep him beyond this season. The clubs could reach an agreement on a loan with an option that becomes forced should the Blues qualify for the Champions League or based on how many goals he scores.

The Spanish striker was originally expected to head to Milan as part of the deal for Gonzalo Higuain, but between his wages and remaining amortized value at Chelsea, the cost would have been too high for the Italian club at this stage. Rather than returning to Serie A, Morata likely will head back to Spain. Although Atletico’s first bid was rejected, an improved offer expected in the coming days should get the deal across the finish line.

While Maurizio Sarri’s preference was to focus on Cagliari’s Nicolo Barella, Chelsea have decided to pursue the Zenit midfielder since he’s a more natural replacement for Cesc Fabregas and a slightly cheaper alternative. While Paredes recently agreed to personal terms with the Blues, their first offer to Zenit of €35 million was rejected. Still, an improved bid could get the deal done during the January window.

Hirving Lozano to Napoli in the summer: 40 percent

The Mexico international had been linked to Chelsea, but last week, Napoli made progress toward acquiring him in the summer. The Italian club were previously interested in Genoa’s Christian Kouame but now view Lozano as a more natural replacement for Jose Callejon. Napoli have been in contact with his agent, Mino Raiola, and a decisive meeting is expected to take place between the parties next week.

After a year spent playing in China, the Belgium international is itching to return to Europe. Carrasco had been linked to Milan, but they could acquire him only on loan with option to buy — a formula that his current club, Dalian Yifang, would not accept. In addition to their financial concerns, Arsenal face competition for Carrasco’s signature from Manchester United.

Since his arrival in Spain last summer, the Belgian striker has failed to make an impact for Valencia. For this reason, the Spanish club is considering the option of terminating his loan from Chelsea six months early. Batshuayi, however, most likely won’t stay with the Blues for long, as Monaco have already shown great interest in bringing him to the principality for the next five months. Monaco’s vice president confirmed that the deal is close to being completed, with Batshuayi set to return to Ligue 1 after his successful spell at Marseille. As an alternative to Batshuayi, Monaco are also considering Nikola Kalinic.

After selling Munir El Haddadi to Sevilla, Barcelona are looking for a new striker. The Blaugrana have especially set their sights on Eintracht Frankfurt striker Luka Jovic, who has scored 12 goals in 15 appearances with the German side. The 21-year-old Serbian is currently on loan from Benfica, but Frankfurt have the option to trigger a clause to make the deal permanent for a sum in the region of €12 million, making a move to Spain in January quite complicated. The deal, however, might gain momentum in the summer, when Eintracht could agree to sell Jovic for significant profit.

Although he has become a talisman for the Hammers, the Austrian forward’s days in claret and blue could be nearing a conclusion. The former Stoke City player has in fact received a huge offer from China, and he has made it clear, through his agent/brother, that his desire is to leave England and embrace a new adventure in Asia. For their part, West Ham have already turned down a £35 million offer, and they seem determined to keep him. However, should Arnautovic keep pushing to leave, the club could have no other option than to grant his wish, provided that the Chinese club — reportedly Shangai SIPG — increase their offer.

On Tuesday, Genoa’s sporting director, Giorgio Perinetti, confirmed that he had been in talks with Milan regarding the Polish striker, but that it would take a significant offer for the club to let him leave in January. The Rossoneri‘s Financial Fair Play restrictions will likely force them to either sell someone such as Hakan Calhanoglu, who has suitors in the Bundesliga, or structure the deal as a multiyear loan by leveraging their strong relationship with Piatek’s current club to get this across the finish line.