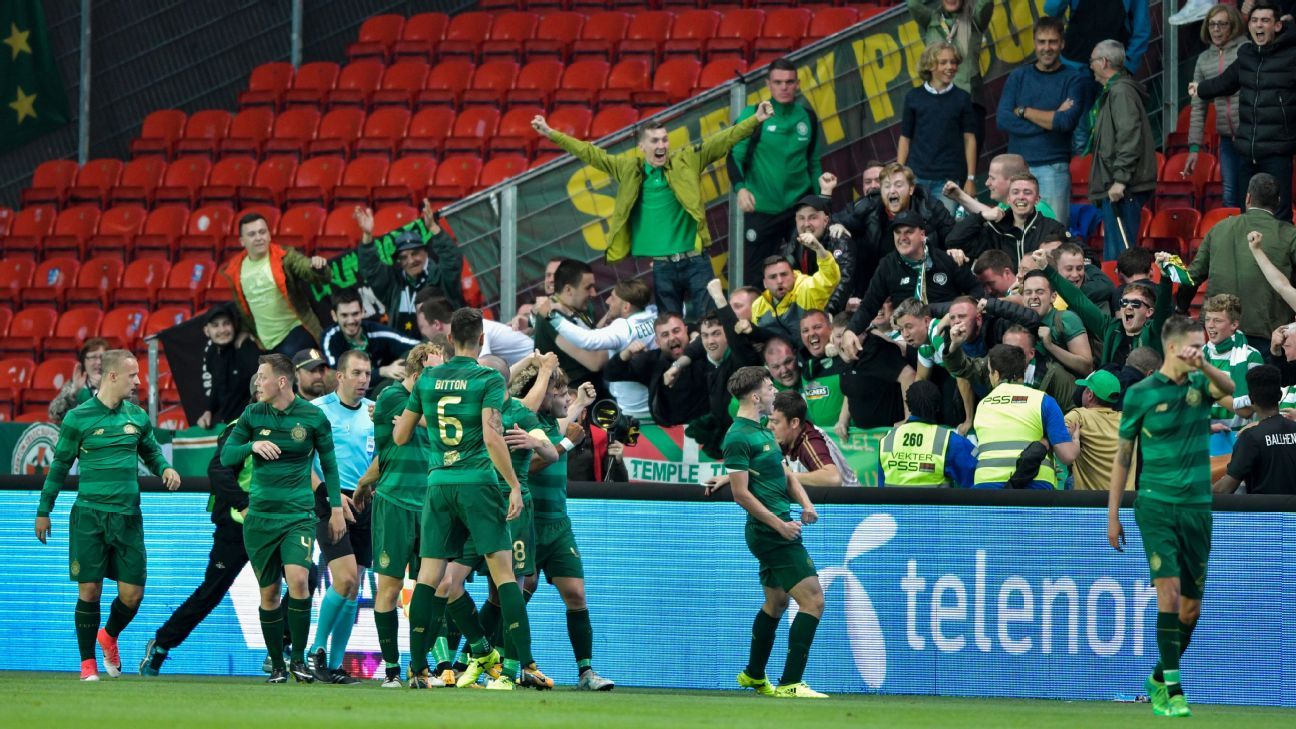 Following the goalless draw at Parkhead last week, Celtic were again without their only two recognised strikers Moussa Dembele and Leigh Griffiths – with winger Forrest asked to move into the middle.

The Scotland international was thwarted in a first half dominated by Brendan Rodgers’ side and, in the 69th minute, Forrest fired a shot high past keeper Andre Hansen to take the visitors into Friday’s play-off draw with a 1-0 aggregate win.

Rodgers had indicated that Forrest was in line to replace Griffiths, who would have missed the first leg anyway with a calf injury had he not been suspended.

The Scotland striker could only make the bench and while fit-again Danish defender Erik Sviatchenko replaced 19-year-old Norwegian Kristoffer Ajer, he lasted only 25 minutes before going off with an injury with midfielder Nir Bitton taking his place.

Midfielders Callum McGregor and Jonny Hayes also came into the side with Olivier Ntcham and Tom Rogic dropping to the bench and Ajer missing altogether.

Rosenborg, with former Arsenal striker Nicklas Bendtner again leading the line, found Celtic as keen to press as they had done in Glasgow which gave encouragement to the 400 or so Hoops fans in the near 21,000 crowd.

When Celtic keeper Craig Gordon made an easy save from Milan Jevtovic’s low 25-yard drive in the 15th minute, it was his first real involvement in the match.

The Scottish champions almost took the lead five minutes later when Hayes’ free kick from the left touchline found Sviatchenko at the back post but his header was chested away from the goal by Bendtner.

Rodgers was forced to reshuffle when Sviatchenko hobbled off with Bitton replacing him in the heart of the Hoops defence.

However, Celtic’s flow was uninterrupted and Hansen had to pull off a fine save from Forrest’s side-footed effort from six yards, following a Kieran Tierney cut-back.

Hansen saved a Scott Brown drive and Gordon collected a Bendtner header but it was the Eliteserien leaders who would have been happier to hear the interval whistle.

However, two minutes after the restart, Rosenborg attacker Yann-Erik de Lanlay took a cushioned Bendtner pass and drove just wide of the target.

Griffiths came on for Hayes in the 57th minute, seconds after Tierney had curled a 20-yard shot with his right foot just past the far post, before Rosenborg skipper Mike Jensen hit the side-netting with a decent drive from the edge of the box.

There was growing anxiety as the minutes ticked past but Forrest took a Sinclair pass and, from 14 yards, fired an angled drive in off the crossbar before racing off to celebrate with the travelling fans.

Rosenborg threw everything forward but, in the 82nd minute, Forrest missed a great chance on the counter-attack when through one-on-one with Hansen while Griffiths too had an effort blocked by the keeper.

However, it was academic as Celtic deservedly moved to within 180 minutes of Champions League football under Rodgers for the second successive season.