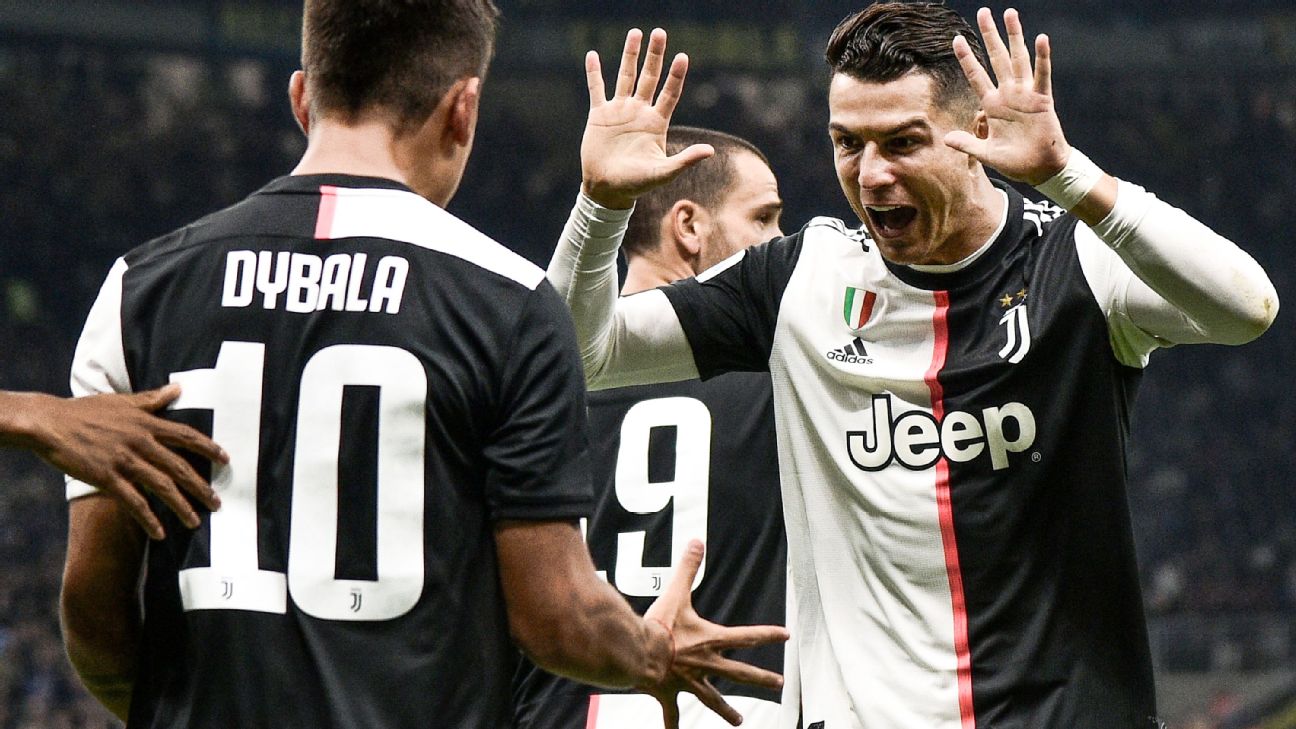 
A fast and furious Derby d’Italia ended with a late Gonzalo Higuain goal as Juventus beat Inter 2-1 (stream a replay in full on ESPN+) to retake their usual spot at the top of the table. The result, thoroughly deserved on the balance of play, will come as great satisfaction to Maurizio Sarri. The performance greater still.

Juventus continue to get better and better, and after beating Napoli 4-3 in August, they reminded another title rival of the scale of the task facing them if another team is to stitch the Scudetto on their shirts come May. Inter’s perfect record in Serie A is no more, and the team that shone in defeat in Barcelona on Wednesday night did not hit the same heights.

Antonio Conte made two changes from the team that looked sharp in Spain with Romelu Lukaku coming in for the suspended Alexis Sanchez and Danilo D’Ambrosio taking the place of Antonio Candreva on the right. How much gas the Antonio Pintus-drilled Inter had left in the tank after their efforts in the Camp Nou was one of the talking points before kickoff. Juventus’ extra day of preparation and no travel — they had a regulation home win over Bayer Leverkusen in Europe — promised to be an advantage, and they started sharp with Miralem Pjanic catching Inter’s iron defence out with a ball over the top. Paulo Dybala then produced a rasping shot through Milan Skriniar‘s legs and past Samir Handanovic in the Inter goal.

Sarri’s choice to go with Dybala instead of Higuain from kickoff found immediate vindication. Dybala has been in fine form since the last international break, setting up goals for Cristiano Ronaldo against SPAL and Leverkusen. Through September and into October, Juventus have got closer and closer to what we expect from a Sarri team, a turning point coming when the system shifted from 4-3-3 to a diamond with Dybala playing as a second striker.

The difference between the Napoli win and this one is pronounced, with Juventus transitioning from a Douglas Costa-led threat on the counter to a team able to dominate in possession with more and more sophisticated passing patterns. Sarri’s decision to go with Federico Bernardeschi as the nominal No. 10 instead of Aaron Ramsey following the Italian’s first goal of the season against Leverkusen did not pay the same dividends. But it didn’t have to — such was the level of interplay between Dybala and Ronaldo, who struck the crossbar shortly after Juventus’ first goal, skipping past Diego Godin and Stefan de Vrij before letting rip. The Portuguese would later force a save from Handanovic with Dybala plucking a Blaise Matuidi cross out of the air and teeing him up for a shot. He’d also have a goal chalked off after Dybala strayed an inch offside following another wonderful move.

Inter, trailing for the first time in Serie A this season, made this a fierce and entertaining contest. Lautaro Martinez, who had put his side in front in Catalonia, got them back level early with just the 10 minutes coming between his goal and Dybala’s. The Argentine beat Wojciech Szczesny from the spot after Matthijs de Ligt, who has come on leaps and bounds since his Napoli nightmare, handled a Nicolo Barella cross while seeking to stay with Martinez.

On a night that must have left Argentina coach Lionel Scaloni with a big smile on his face, Martinez kept taking the battle to Juventus. Szczesny prevented another of his shots from billowing in the top corner after Lukaku beat Pjanic and then De Ligt to start a fast break. The Belgian then lost the ball, but Martinez picked up the baton and had a go, taking on and getting the better of Bonucci.

In some respects, the game turned not as Inter faded physically, but when Stefano Sensi, the revelation of this season, went off injured with a adductor problem after half an hour. Matias Vecino came on and swapped positions with Barella, and while the danger was far from over for Juventus, the fluidity to Inter’s game suffered. Vecino and Lukaku, flattened by a Ronaldo free kick in the first half, both made poor decisions in the final third, and those misunderstandings were met with loud sighs ringing around San Siro.

Only two of Inter’s players ended the first half with more than 20 passes completed, and the foul count [11-2 against Juventus] spoke to the aggression of Conte’s crew, the pressure they were under and the antics of Ronaldo and Dybala, which had the home fans up on their feet. A brawl almost broke out as the teams went in for the interval, with Inter’s back up goalkeeper Daniele Padelli confronting Dybala on the way to his half-time oranges.

Unlike in those early weeks of the season when Juventus dipped in the second half of games, here they were able to sustain and build on what the team promised before the break. In fact, Sarri was so encouraged by what he saw, he decided to replace Bernardeschi with Higuain and play him with Ronaldo and Dybala. It was a show of strength, perhaps a moment of hubris, too, as all of a sudden Inter came back to life.

Conte should be pleased with how his team kept fighting right until the end. Vecino twice went close with Szczesny making another vital stop. The Pole must have held his breath when another attempt from the Uruguayan struck de Ligt’s back and left him flat-footed. Unfortunately for Inter, the ball hit the outside of the post.

In the meantime, Sarri sought to re-balance his team with Emre Can entering for the superb Dybala. It was now left to Ronaldo and Higuain to finish Inter off, and they delivered. A 24-pass move ended with Ronaldo and Rodrigo Bentancur, preferred to Ramsey as the in-game alternative to Bernardeschi in the No. 10 role, combining to release Higuain behind the Inter defence. “Pipita” had one chance and he took it, scoring in yet another big game to follow his brilliant goal against Napoli.

As a sub, this one worked in a way that none of Conte’s changes did. Godin joined Sensi in leaving the field with a knock and heads were scratched as Matteo Politano came on for Martinez not Lukaku. Perhaps it was in this exact moment that Sanchez’s ban was most keenly felt.

Barcelona and, particularly, Juventus have given Inter a reality check. But the overwhelming sense remains that this is a competitive team that won’t be going away. The problem for Inter, though, is not insignificant; Sarri is beginning to unlock the remaining potential the club felt Max Allegri failed to tap.

The irony is that Juve’s matchwinners were up for sale until the final week of the transfer window. Higuain and Dybala are playing with a point to prove and look hungrier and better than ever. Pair that with Sarri’s re-imagining of this Juventus team and maybe this isn’t the end of their dominance after all. Quite the opposite.