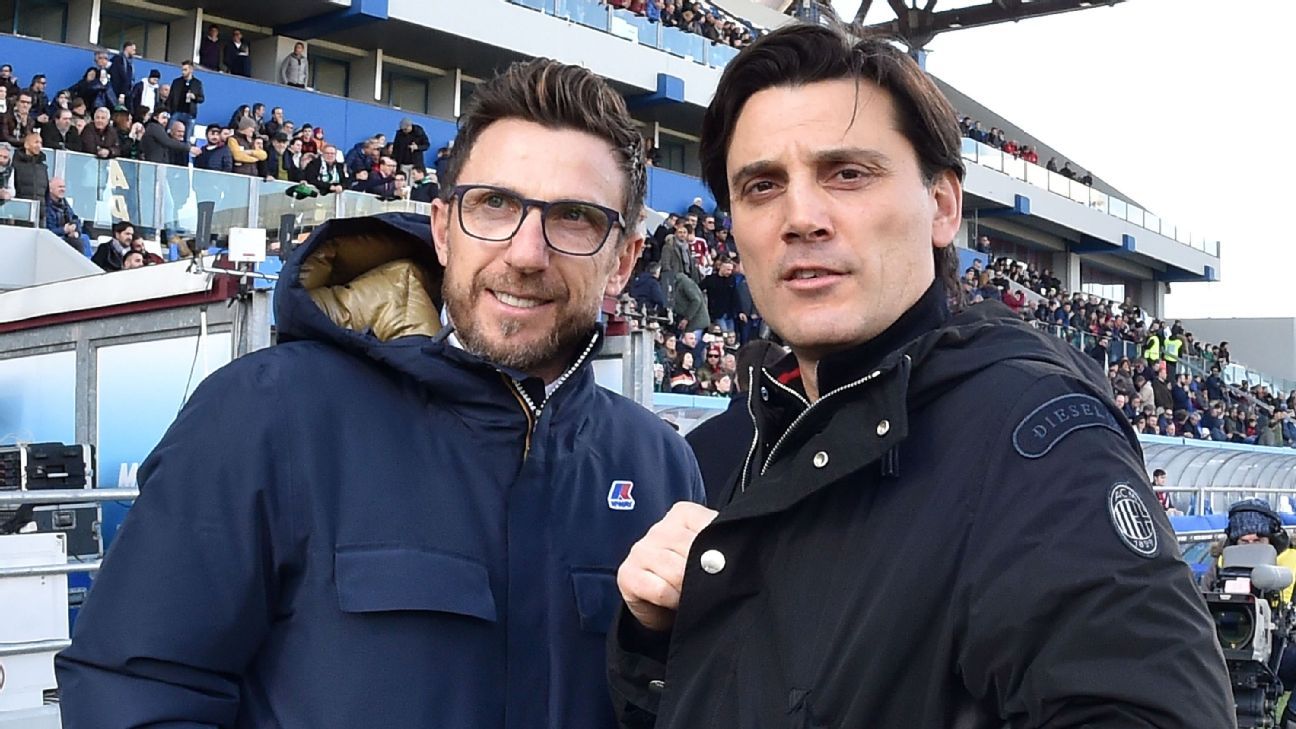 
Eusebio di Francesco and Vincenzo Montella have known each other for years. Most people remember them playing together for Roma’s last title-winning team in 2000-01, but the friendship between the two actually goes back even further to the very start of their careers.

Di Francesco and Montella were apprentices at Empoli. Just two kids, a long way from home, with the same goal of making it as professional footballers. Another teammate from back in the day, Nicola Caccia, is now Montella’s assistant, making Sunday’s game between Milan and Roma a sort of friends reunited. Of course, what goodwill they feel towards one another will not stop Di Francesco stepping over Montella, or vice-versa, in pursuit of their objectives this weekend. The result of this game will leave an echo over the international break and be pored over and picked apart for a fortnight. You might say it pits the underrated against the over-hyped.

If you weren’t downgrading Roma’s chances this year, you were a lonely voice. Many of the papers in Italy forecast them to regress, ruling the Giallorossi out of the battle for the title and even going so far as to argue they might face a scrap to remain in the top four. Talk about harsh.

The grounds for doing so were the loss of their record-breaking manager, Luciano Spalletti, to one of their rivals, the appointment of a candidate without experience of coaching a big club and the sales of Wojciech Szczesny, Antonio Rudiger and Mohamed Salah. Monchi’s first transfer window as Roma’s sporting director also wasn’t considered sexy enough until the signing of Patrik Schick, although even that didn’t completely silence the critics because of the assumption Salah would be replaced by another winger.

It paled in comparison with what Milan were doing around the same time, spending €230 million — three summers’ worth of budget in one — on an entirely new team, keeping Gianluigi Donnarumma and “weakening” champions Juventus with the signing of Leonardo Bonucci.

For a club as respectful of the limits imposed on it by FFP, the scale of Milan’s shopping spree caused consternation at Roma, with owner Jim Pallotta saying it “makes zero sense” and “I don’t know what the heck is going on” in an interview with Sirius XM FC. His comments left Milan’s new chief executive Marco Fassone “stunned” for their “style” and “inaccuracy,” which in turn prompted Pallotta to turn diplomat and apologise “if I have some incorrect information.”

Milan’s sensitivity to anyone calling the financing of the club’s transfer window into question didn’t stop there. It also extended to a brief boycott of Sky Italia after presenter Ilaria d’Amico said “this club has done extraordinary things if they have all the financial cover in place.”

Just how extraordinary could be measured (provisionally at least) in the revision of Milan from a team with a chance of making the top six to genuine title contender. As Roma lost the last of their preseason friendlies to Celta Vigo 4-1 — a “disaster” in Di Francesco’s opinion — Milan attracted crowds of 65,000 for their Europa League qualifiers and returned to continental competition for the first time in three and a half years. It felt like there was a shift back towards the Milanesi, at least in terms of challengers to Juventus’ crown.

Part of this was the projection of what the papers wanted to see. With 10 Champions League titles between them, Milan and Inter have been in the wilderness too long and Serie A needs them to be competitive again in order to recover its wider appeal.

Perhaps, deep down, this also played into Roma being underestimated this season, and how they started the season contributed to this as well. Roma played ugly and beat Atalanta one week, performed well and lost to Spalletti’s Inter the next. The former was forgotten about as Juventus, Milan, Inter and Napoli all scored three goals each to win comfortably on the season’s opening weekend, dominating the headlines when, in terms of a result, Roma’s narrow gutsy win at a ground where they lost last year against a team that finished fourth was the most impressive.

As for the latter, it just felt like bad luck. Roma took the lead, hit the woodwork three times and should have had a penalty in the game. It just wasn’t their night, with fortune instead favouring Inter who came back and won thanks to some clinical finishing.

Helping the title race narrative move on without Roma is the fact their first game back after the international break got postponed and is still to be played. A passing glance at the table shows Roma down in fifth, five points off the top. Win their game in hand, though, and they would be just two points behind Juventus and Napoli, both of whom have made perfect starts. Talking on Sunday’s Sky Calcio Club, Gianluca Vialli compared Roma to a Great White Shark, circling in the water, visible only by its dorsal fin and poised to strike.

The team has made big strides over the past three weeks and you can see that Di Francesco is getting his ideas across. Criticised one day, he has an answer the next. Against Atalanta, the knock against Roma was that they weren’t productive enough in attack, but that changed against Inter. In fact, Roma have had 68 attempts on goal in their past three games. Judged to be too rigid against Inter, when Di Francesco’s response to an injury crisis at right-back was to play the left-footed Juan Jesus out of position rather than switch to a back three, he displayed flexibility by doing just that during the game against Atletico Madrid.

Then came the friendly fire from Edin Dzeko. While Di Francesco didn’t appreciate his star striker going public with how he misses Salah and wants Radja Nainggolan closer to him, he took the striker’s misgivings on board and look at the results. The Bosnia international has scored seven goals in seven games. As for Monchi, his transfer window may not have had the style of Milan’s, it did have substance. Aleksandar Kolarov is considered the bargain of the season in Serie A and Roma have a depth they haven’t had in a long time.

With four wins in five, Roma head north to Milan level on points and with a game in hand. They also have a nine-game winning streak on the road, two short of the record set by Inter. Clearly Spalletti ingrained a winning mentality on this team and it lives on under Di Francesco. Little by little, this team is rising above the scepticism.

Montella’s task at Milan was of an altogether different nature: they had to meet the great expectations set over the summer and maintain the enthusiasm all the signings generated. Defeats to Lazio and Sampdoria haven’t popped the balloon, but they have deflated it a little and with Roma and the Derby della Madonnina on the horizon, Montella finds himself under scrutiny, especially now that Carlo Ancelotti is back on the market.

It’s never a good look when your boss is effusive in praise of an opposition manager, as Fassone was for Sampdoria manager Marco Giampaolo last weekend. His appearance in front of the cameras at the weekend, to remind Milan’s coach and players that performances like last Sunday’s are unacceptable, offered a telling reminder of how high the stakes are for Milan this season. It isn’t exactly Champions League or bust but the project can’t grow as forecast without that tournament’s revenue and prestige.

Milan have to come together as a team and fast, not just in the Europa League. Bonucci has to start playing to his reputation, recruits new to the league must adapt and Montella, who dumped his long-time fitness coach this week, has to settle on a system that works, with Suso symbolic of Milan’s dilemma. The Rossoneri‘s Player of the Year last season, there isn’t a place for him in the 3-5-2 Milan are trying with Bonucci in mind.

Sunday’s game at San Siro already feels big, and perceptions of both clubs could change again. No matter what happens, though, Montella and Di Francesco’s friendship will remain the same.