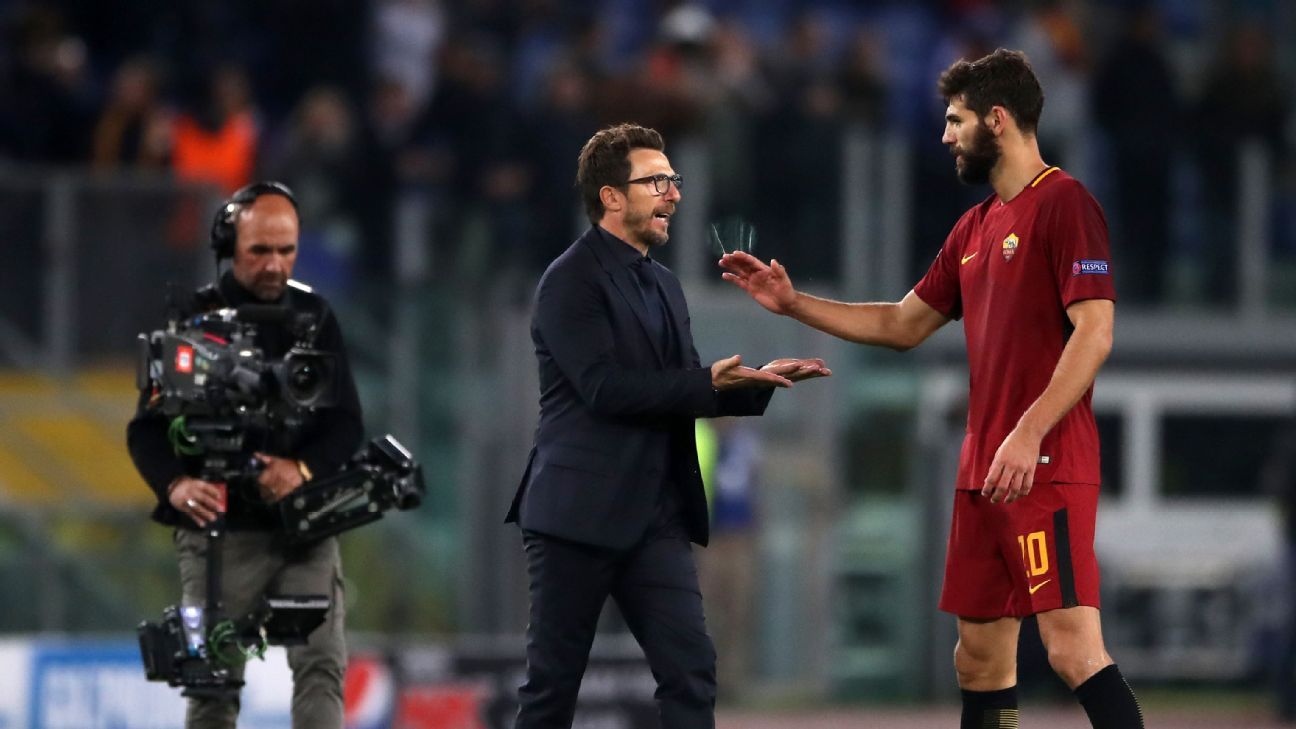 
And to think that some Roma fans wanted them to tank…

On Monday, the talk in some quarters — particularly among the local radio stations that provide the soundtrack to any taxi ride in the Eternal City — was that Roma boss Eusebio Di Francesco should play the long game.

The club were obviously not going to come back from a 4-1 deficit against Barcelona in their Champions League second leg, so why not conserve their energy for Sunday’s Serie A derby against Lazio?

It made sense, didn’t it? Beating Lazio — tied for third with Roma and one point ahead of Inter — would mean taking a big step towards a top four finish. And that, in turn, would secure another year in the Champions League, which means a minimum of $60 million in the coffers (and maybe much more.) Surely, for a club still under Financial Fair Play (FFP) restrictions, this made more sense than chasing some kind of “Field of Dreams,” three goals in the hole?

In a very rational universe that argument makes sense. The combination of Europa League football and FFP restrictions would likely mean another summer of asset-flogging to make ends meet. And Roma fans would have to say farewell to a Radja Nainggolan or an Allisson, just as they bade adieu to Mohamed Salah, Antonio Rudiger and Miralem Pjanic the past two summers.

Thankfully, Di Francesco doesn’t live in this “very rational” universe. He inhabits one where hope springs eternal, where you can dream big, where you owe it to the fans to fight until the very end. A universe where you stop and ask yourself: “What is the point, other than cash, of qualifying for the Champions League if we’re not going to have a go when we’re there?”

Not that he didn’t agonise over the right approach against Barcelona. The decision to ditch his preferred 4-3-3 with the wingers wide for a near unprecedented back three with the lanky Patrik Schick playing off the Colossus (AKA Edin Dzeko) came to him at 5 O’clock in the morning on Sunday, the day after Roma’s home defeat to Fiorentina.

“I couldn’t sleep, plus I’m a bit insane, so I got out of bed and drew up possible schemes for the Barcelona game, different looks that would put them under pressure in different ways,” he said. “And this came to me. Had it not worked, you would have killed me.”

It didn’t just work, it road-graded: apart from an early Sergi Roberto chance, all Barca could muster were a couple Lionel Messi free kicks and Ousmane Dembele’s mad lob at the end.

Make no mistake about it, this was a gamble in all respects — beginning with the decision to press high to disrupt Barcelona’s build-up. It’s not something that, on paper, Roma ought to be good at. Dzeko and Aleksandar Kolarov are both 32, while Daniele De Rossi is 34. None of the three are what you’d call dynamic at this stage of their career. Nainggolan is a livelier of course, but he was coming off an injury.

Keeping a high line against Barca meant pitting the back three against Messi and Luis Suarez. And, bear in mind, the back three included Federico Fazio, who at 6-foot-5 isn’t who you want in the open field against Messi (or, really, anyone) and Juan Jesus, the Stadio Olimpico’s favourite whipping boy for the past two seasons.

The margin for error was wafer-thin, but Roma had the concentration and the nous to stay within it. As Barcelona coach Ernesto Valverde pointed out, his side were rattled and forced into hitting longer passes. But when you do that, you need to win the second balls. And Barca scarcely had a sniff of those all night.

Valverde said after the game that he was to blame as he was responsible for the personnel and the formation. And truth be told, insisting on the same formation as the first leg (whose 4-1 scoreline was largely due to individual blunders, own goals and penalties not given) seemed foolish. Shoe-horning Nelson Semedo into the lineup by moving Sergi Roberto to the wing backfired badly; so too did leaving out Dembele, the only Barcelona attacker with a bit of pace.

The fact that Valverde waited until the 75th minute, when Roma were 2-0 up, to make a change (other than shifting Andres Iniesta centrally) suggests that he either didn’t realise his team were producing close to nothing or that he simply froze, like a deer in the headlights of Mac Truck.

But there’s enough blame to go around here, starting with the front two. Suarez’s most impactful contribution may well have been the two minutes of time he ate up feigning injury after Juan Jesus’ hand grazed his face. And after setting up the Sergi Roberto chance early, Messi faded into oblivion.

And that’s not good news for a team that is as Messi-dependent in the final third as Barcelona have been in many years. Again, the warning signs were there. They were humdrum against Roma at Camp Nou and, but for Messi’s heroics and some craven individual mistakes, might have gone out against Chelsea in the previous round as well.

Some of us even pointed it out at the time: Valverde needs to find a way of scoring that is not Messi-related.

It wasn’t hard to predict Roma getting something out of this game. After all, they had yet to concede a single Champions League goal at home and they bested the likes of Atletico Madrid, Shaktar Donetsk and Chelsea to get here.

But to become only the third team in the Champions League era to overturn a three-goal first-leg deficit is something few could have imagined.

Luckily for Roma one of those few was an insomniac Di Francesco, pulling an all-nighter of crazed alchemy to concoct a formula that would make history in the Eternal City. And luckily — not just for Roma fans but for any neutral who enjoys an underdog comeback — he didn’t listen to those who urged him to be sensible, rational and patient in just trying to live to fight another day.

This was a night for daring. Daring to do and daring to dream. And he did.