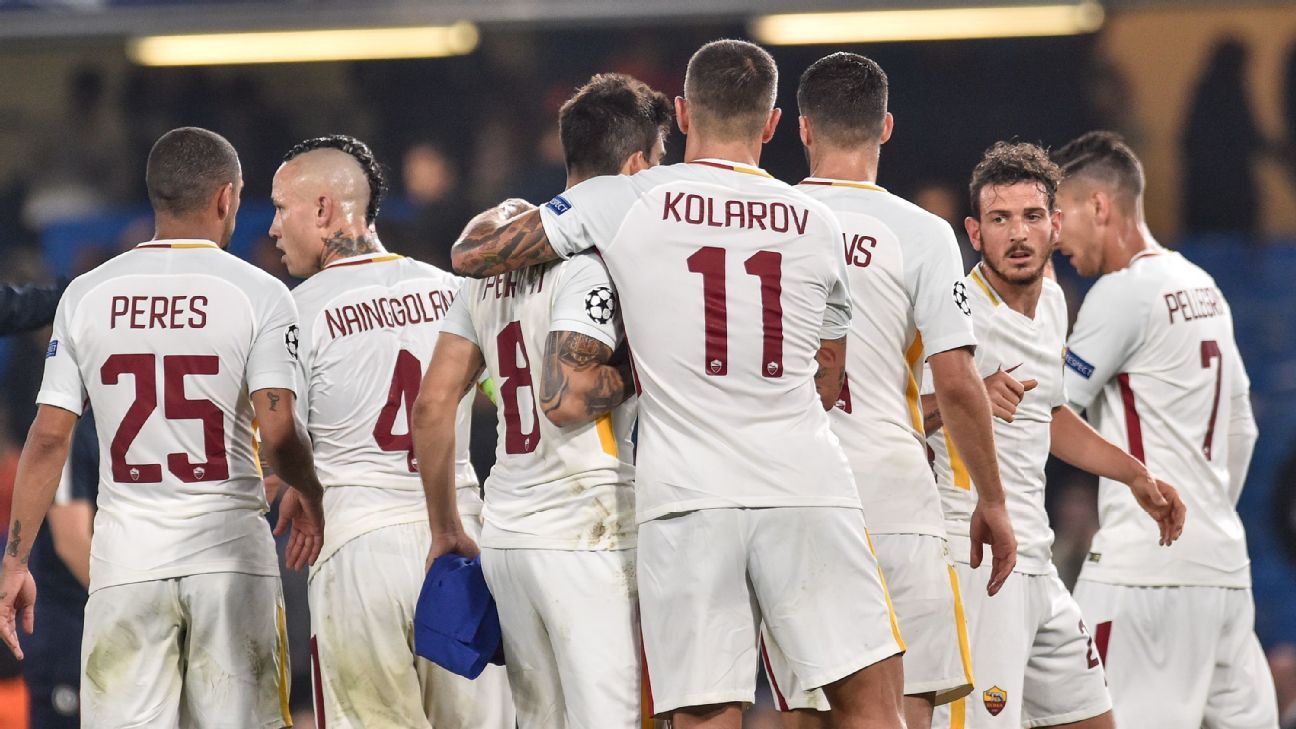 
After wowing Europe by coming back from two goals down to draw 3-3 at Chelsea, Roma return to the more prosaic task of Serie A. Given last weekend’s defeat to leaders Napoli, they need to take their Champions League performance and transfer it to the Stadio Olimpico Grande Torino, where in addition to chasing down the top four, they go hunting an old enemy’s record.

Roma travel to Turin with Inter Milan’s 11-away match winning streak from 2006-07 firmly in their sights. The Giallorossi have won their last 10 away from home since losing to Sampdoria in January and come into the weekend with a gap opening up between them and the Champions League places.

Eusebio Di Francesco’s side are fifth, four points behind Juventus and local rivals Lazio, and nine behind leaders Napoli.

In the frantic, joyous aftermath of Roma’s dominant display at Chelsea, two-goal star Edin Dzeko made the point of reminding everyone not to get too drunk on fan adoration and the headlines lauding their efforts in London. It would be typical of Roma to ruin the good work done and goodwill established midweek by slipping up to a team led by a Lazio hero and allowing the Biancoceleste to skip further away up the league table.

“We need to think about Torino and concentrate on the league,” the striker said as fans and players hugged all around him. “We can think about the Champions League and Chelsea later.”

Roma’s task against Sinisa Mihajlovic’s Torino should be made significantly easier due to the absence of star striker Andrea Belotti, who was stretchered off with a knee injury five minutes before the end of Torino’s 2-2 draw at Verona at the start of the month and will be out until at least after their midweek trip to Fiorentina.

Belotti might not be making the same waves that he has in previous seasons — and has been eclipsed in the bright young thing stakes by the incredible form of Lazio’s Ciro Immobile — but three goals from his five appearances is still a decent return.

Turin has not been a happy hunting ground for Roma over the years, and that goes for the Granata as much as Juventus. In the 72 meetings between the two sides, Roma have won just 13 times, with Torino winning 32 and the teams drawing the remaining 27. However, nine of Roma’s wins there have come in the last 14 matches, with Torino’s sole victory in that time coming last season, when Belotti started a 3-1 beating that was finished off by two goals from former Roma man Iago Falque.

That defeat was the nadir of a terrible start for former coach Luciano Spalletti, as his first (and last) full season on his return to Rome began with his team crashing humiliatingly out of the Champions League in the playoffs and an infuriatingly slow start in the league. Sunday’s clash promises to be hard even without Belotti — Torino have lost only one of their last 14 games at home, with their last defeat coming in May to Napoli.

Eight of those matches have been draws, mostly due to their frankly laughable defending — Torino have scored the same number of goals as Roma, 14, but have conceded 13, a number more in line with the relegation zone than a team nestled just a point behind the Europa League places. Just after Belotti left the field against Verona, with Torino down to 10 having already made three substitutions, Mihajlovic’s team contrived to concede twice in the final three minutes to a truly awful team that until that point had only scored one league goal.

After resting them for the Chelsea trip, coach Eusebio Di Francesco will likely start Roma’s local lads Daniele De Rossi, Lorenzo Pellegrini and Alessandro Florenzi, with Florenzi a candidate for Bruno Peres’ place at right-back following the Brazilian’s less-than-thrilling display at Stamford Bridge and the return of Stephan El Shaarawy, who was allowed a couple of minutes in London after recovering from a thigh injury.

Former Torino man Peres’ time as a regular starter at Roma might be coming to an end after a series of poor performances and the imminent recovery of Rick Karsdorp, who was bought in the summer as starting right-back but is yet to play a single minute thanks to slow recovery from “routine” preseason knee surgery and subsequent muscle injuries.

However, the home fans might get a glimpse of how far their former hero has fallen, as El Shaarawy could take the place of Diego Perotti on the left of the attacking trident, with Florenzi on the other side of the indefatigable Dzeko. Despite what the striker says, Roma will be thinking about the return match with Chelsea, which could decide their Champions League destiny, but with a couple of easier home matches coming up, a continuation of the Stamford Bridge euphoria in Turin would do a lot for their domestic campaign.