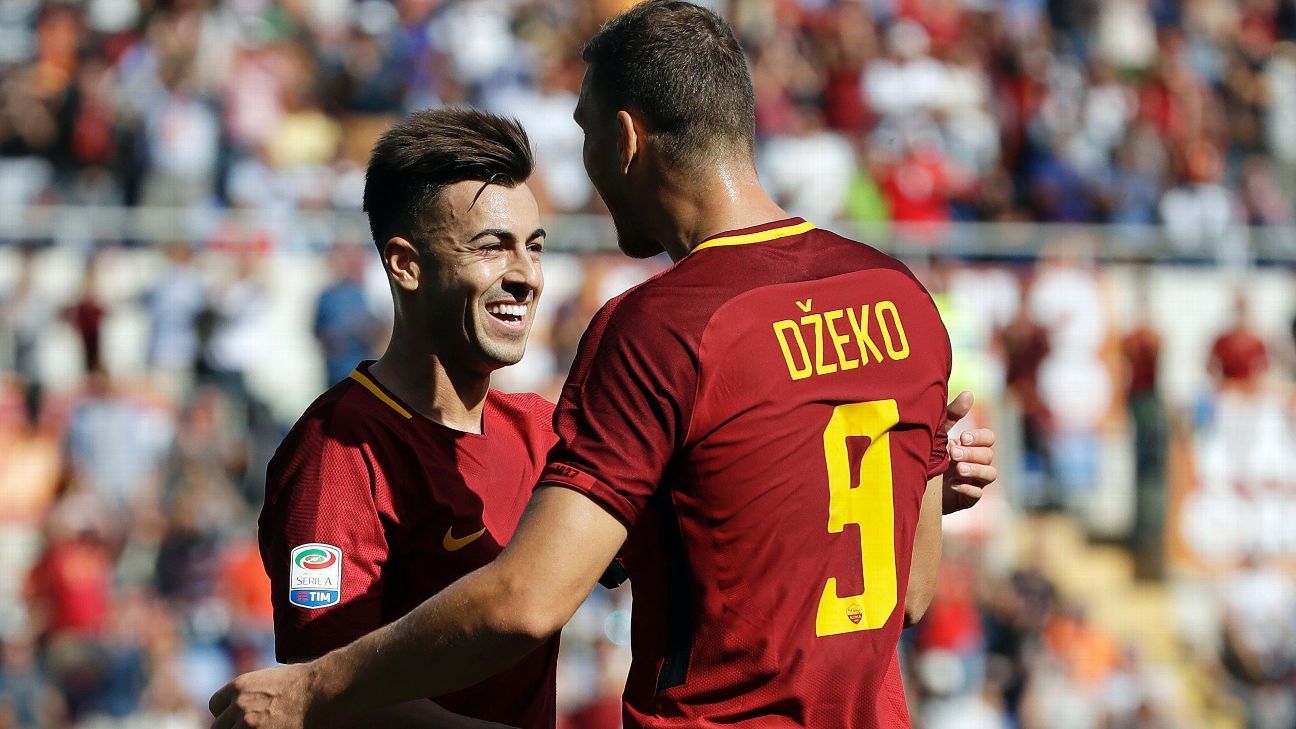 
Roma made it three wins in a week with a 3-0 win against lowly Udinese, whose enthusiasm in attack was matched by some utterly diabolical defending.

Stephan El Shaarawy was the star of the show with a brace that closed out a match that was done and dusted by half time, first neatly flicking home Edin Dzeko’s deflected low cross — just after Lopez missed a golden chance to equalise — and then right before the break, charging down a dozing Jens Stryger Larsen to tap home his second.

The Pharaoh’s partner Dzeko got Roma up and running after just 12 minutes when he took advantage of the ball squirming through a series of weak challenges on Radja Nainggolan to slot past Albano Bizzarri with his left.

The Bosnian was the personification of the centre-forward coach Eusebio Di Francesco wants to see, constantly moving and working in unison with El Shaarawy and Diego Perotti, who missed his first penalty as a Roma player late on, just before Larsen pulled a probably deserved consolation goal for the away side.

Saturday’s was the last of three soft fixtures for Roma, as up next comes the long trip to Qarabag in the Champions League, then AC Milan at the San Siro next weekend, but the growth in the last week has nonetheless been immense.

Roma started where they left off at Benevento in midweek, getting straight at Udinese and pushing them back into their own area. The much-questioned 4-3-3 system now looks to be fully up and running, and although the opposition over the last week has been extremely weak, Roma have done what they have always struggled to do — sweep away the dross. Now it’s time to see if they can bring this level of performance to more testing stages.

Despite being clearly the better team, Roma conceded too much at the other end — 14 shots to compared to their own 18, with five on target. Maxi Lopez must be wondering how he scuffed his shot so badly when only a few yards out and the hosts only one goal ahead, while Alisson had to sharp to stop good efforts from Jakub Jankto and, in particular, Rajid Bajic, whose close-range drive was quickly followed by Bram Nuytinck thumping the crossbar. Better teams will be more clinical.

6 — Much as at Benevento, Di Francesco’s team followed his instructions to the letter, and he made sure to sub the players who were most in need of a rest.

GK Alisson, 7 — That second half save from Bajic showed just how important he could be over the course of the season.

DF Alessandro Florenzi, 7 — Up and down the right flank like an angry ferret. Incredible display for someone who’s just recovered from a long anterior cruciate ligament layoff.

DF Kostas Manolas, 6 — A bit sloppier than in the last two games, but always in place to recover any slip-ups.

DF Federico Fazio, 6 — Has improved plenty on a dodgy couple of opening weeks, but still needs to attack the ball with more urgency.

DF Aleksandar Kolarov, 6 — A less spectacular display than in recent weeks, but still granite solid at the back.

MF Kevin Strootman, 6 — His usual powerful self. Led the pressing and moved the ball with little fuss.

MF Daniele De Rossi, 6 — Every now and again he finds himself too deep, which gives opposition midfielders a bit too much space. But excellent with the ball.

MF Radja Nainggolan, 7 — Looks like he’s finally on board with the new system. Caused havoc.

FW Diego Perotti, 7 — Missing a penalty he earned with a trademark burst down the left ruined a good afternoon’s work.

FW Edin Dzeko, 8 — Five goals in three games, and he added a fine assist for El Shaarawy. The big man is officially back.

FW Stephan El Shaarawy, 8 — Took his first excellently and did brilliantly to pounce on a mistake for his second. Was involved in all of Roma’s best attacks.

FW Gregoire Defrel, N/R — Unlucky not to score his first Roma goal after being set through brilliantly by El Shaarawy. Much more comfortable as a central striker than on the right.

DF Hector Moreno, N/R — Being out of position and playing a one-man offside trap for Larsen’s consolation goal was not a good look.