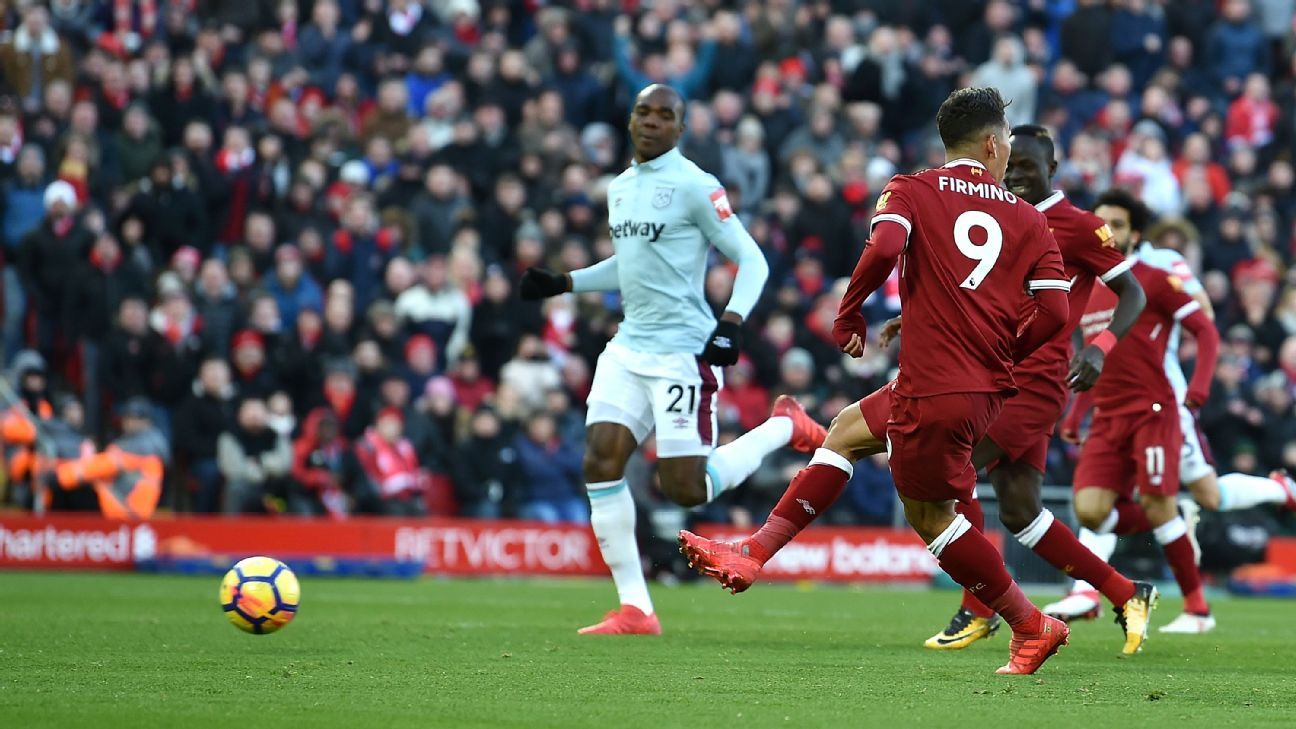 
Liverpool move into second place after a fairly comfortable afternoon. Without really hitting their scintillating best they still cruised to victory against an opponent that has given them trouble at Anfield in recent seasons.

Some of Liverpool’s play was superb and even on an average day they can still rack up the goals. Patient passing after the Hammers scored took the sting out of an unlikely comeback.

They were a little sloppy at 3-0 and paid the price. Against better opposition that has proved fatal in the past. It’s a very small problem but one the manager will want to nip in the bud quickly.

7 — More of the sublime attacking play which is Jurgen Klopp’s trademark, bringing James Milner to the fore later in the season is proving a masterstroke.

GK Loris Karius, 7 — Good save kept the score 1-0 in the first half and he showed some quick distribution at times, confirming his selection as permanent first-choice goalkeeper is paying off.

DF Trent Alexander-Arnold, 8 — Full of energy and pace, this was the kind of game where supporting the attack became his main task and he did it excellently at times.

DF Joel Matip, 7 — A largely composed performance with one or two blips, good in possession and cool under what little fire there was from West Ham. Nearly came unstuck against Marko Arnautovic and was lucky the Austrian’s effort hit the bar.

DF Virgil van Dijk, 8 — Another assured display. Greater challenges lie on the horizon for sure but he has noticeably instilled a calming, authoritative influence in his short time with the Reds.

DF Andrew Robertson, 8 — Another great game from the Scot. Like Alexander-Arnold, his best work came further forward and he was close to several assists before one of his crosses was finally dispatched by Sadio Mane for the fourth goal. One of the finds of the season.

MF James Milner, 8 — He was great at Porto, overshadowed perhaps by the forwards, but he was exceptional again today. Teammates could learn a few lessons from him on how to treat all opposition with respect. His know-how and aggression paid dividends all over the pitch. If he is to be a regular for the rest of the season, he could ultimately be the difference between success and failure.

MF Emre Can, 7 — Scored the all-important opener but was slapdash at times. When he was good he was very good but his complacent dawdling led to the visitors’ only goal. Has to learn to bring his A game to every occasion and could be a world star as a result.

MF Alex Oxlade-Chamberlain, 8 — More like Milner, with the added bonus of some strong forward runs which had the Hammers in a flap all afternoon. He certainly helped create the second goal. When selected he hasn’t been at his best of late but this will hopefully fill him with confidence for a busy run-in.

FW Sadio Mane, 7 — Some parts of his game still aren’t quite right and he was responsible for an awful miss at 3-1. Deserves credit for not letting his head go down and was finally rewarded with a goal late on.

FW Mohamed Salah, 8 — The man just can’t be stopped. It may seem greedy but he probably should have scored a hat trick today. Each manager must be doing his homework on the Egyptian and yet he continues to elude defenders, score goals and carve out chances. It’s the sign of a truly great player.

FW Roberto Firmino, 9 — Another inventive, unselfish, busy performance. It’s almost becoming dull in its repetition but the Brazilian makes this team tick. Has the extra responsibility after Philippe Coutinho’s departure taken him to a whole new level?

MF, Alberto Moreno NR — Nothing much to do except run down the clock.