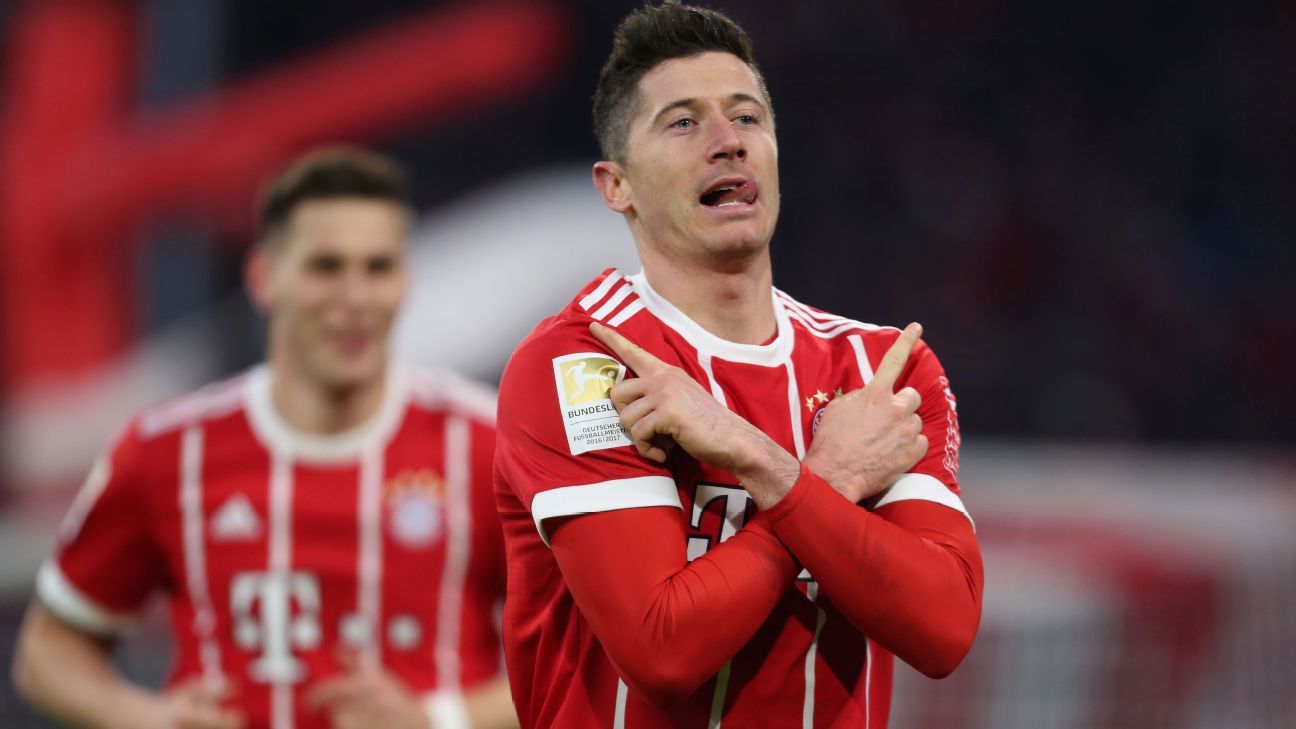 
Ahead of the biggest game in German football, here’s the lowdown on the five best players to have played for Bayern Munich and Borussia Dortmund.

Possibly the best free transfer in the history of the game.

Lewandowski joined Bayern in 2014, having made his name at  Dortmund, where he notched 74 goals in 131 Bundesliga games. “Lewy” scored a famous backheel winner against Bayern to effectively clinch the Bundesliga title in 2012 and followed up with a hat trick in the DFB Pokal final a few weeks later to seal the double for Jurgen Klopp’s charges against Jupp Heynckes’ side, who were destined for the wrong type of triple — a trio of second-place finishes in all major competitions. That painful thrashing in the domestic cup final changed the course of German football forever as Bayern vowed never to experience such humiliation again.

Meanwhile, Lewy also scored all four goals in BVB’s 4-1 win over Real Madrid (potentially his next employer) as Klopp’s side went all the way to the 2013 Champions League final, losing to Bayern and a late, late Arjen Robben goal.

Since joining Bayern, Lewandowski has added three more German league titles to the pair he won at the Westfalenstadion under Klopp. With another Bundesliga title a game or two away, the Poland captain is also on course for his second 30-goal-plus season after 2015-16, when he fired a five-goal barrage in nine minutes as a substitute against Wolfsburg.

A tough, no-nonsense defender and one of the first to be christened a Fussballgott, no doubt on account of his uncompromising approach in the centre of defence.

Following spells at Waldhof Mannheim and Cologne, “Kokser” also put on the red Bayern jersey between 1989-91, winning the Bundesliga in his debut season.

Kokser joined Juventus in 1991, enjoying a much longer stay than teammate Stefan Reuter, and was named Serie A’s best foreign import the following season, winning the UEFA Cup in 1993 against his future employer BVB, whom he joined in 1995.

Ultimately, he spent the majority of his career at Dortmund, making 191 Bundesliga appearances from 1995-2002, winning the Bundesliga in his final season before retirement. Instrumental in BVB’s Bundesliga in 1996, he was also Dortmund’s rock at the back in the 1997 Champions League final success against heavy favourites Juventus and voted German Footballer of the Year in the same year.

His mesmerising battle with England’s Gary Lineker in the 1990 World Cup semifinal is the stuff of legend, as Germany went on to win on penalties, later lifting the trophy in the final against Diego Maradona’s Argentina.

Kohler made 107 appearances for the German national team and was a member of the 1996 squad that won the European Championship under Berti Vogts.

Hummels progressed through all of Bayern’s youth teams. Deemed surplus to requirements by Uli Hoeness, Jurgen Klinsmann et al, he made just a solitary league appearance for the Bavarians before opting to join Klopp at Dortmund — initially on loan and then permanently in 2009.

Hummels enjoyed eight-and-a-half years at Dortmund, becoming a stalwart alongside Lewandowski, as the Black and Yellows racked up consecutive league titles under Klopp in 2011 and 2012.

Basking in Germany’s 2014 World Cup win, Hummels was handed the BVB captaincy, before a reported falling out with Thomas Tuchel accelerated a move back to his roots for a €35 million fee in 2016.

Now sporting director at Augsburg, Reuter — like Kohler — is a 1990 World Cup winner and also starred for Juventus, when Serie A was far and away the best league in the world.

Reuter signed for Dortmund in 1992 after just one season with the Old Lady, going on to become a BVB stalwart and making 307 Bundesliga appearances in 12 years, captaining the side for half of them between 1997-2003. He was pivotal between 1994-96 when Dortmund secured back-to-back Bundesliga titles — their first — under former Bayern coach Ottmar Hitzfeld.

Reuter also won the Champions League in 1997 in the final against his former side Juventus at Munich’s Olympic Stadium. He won the Bundesliga five times in all (three times with BVB and twice with Bayern between 1988-91) and was a member of the German squad that won Euro 96.

Helmer now hosts Doppelpass, a live football chat show on Sunday mornings on German TV. He was born in Westphalia, so it was almost inevitable that Helmer would turn out for BVB for six seasons after joining from Arminia Bielefeld in 1986. However, the classy central defender played for Bayern for a year longer, after becoming the most expensive transfer in the history of the Bundesliga at 7.5 million Deutschmarks back in 1992.

Despite winning three Bundesligas with Bayern in 1994, 97 and 99 — and Euro 96 with Germany at Wembley bunched in between — Helmer became more famous for scoring a famous “ghost goal”. Helmer’s Phantomtor was awarded to much astonishment, despite the ball missing the goal and going over the byline as title-chasing Bayern scraped a 2-1 win over struggling Nuremberg in 1994.

“There was a brief moment where I did not know where the ball was — then the shot was saved and went wide, but everyone cheered as if the ball had previously crossed the line,” said the ghostly Helmer, explaining why he ignored the sense of fair play and failed to bring the mistake to the referee’s attention.

“It’s too bad that I am always asked to talk about the Phantomtor rather than my success at the European Championship in 1996,” Helmer later said.

For the record, the German FA went against FIFA statutes and ordered the match to be replayed, with Bayern romping to an inevitable 5-0 win and the title, while an irate Nuremberg were relegated on goal difference.