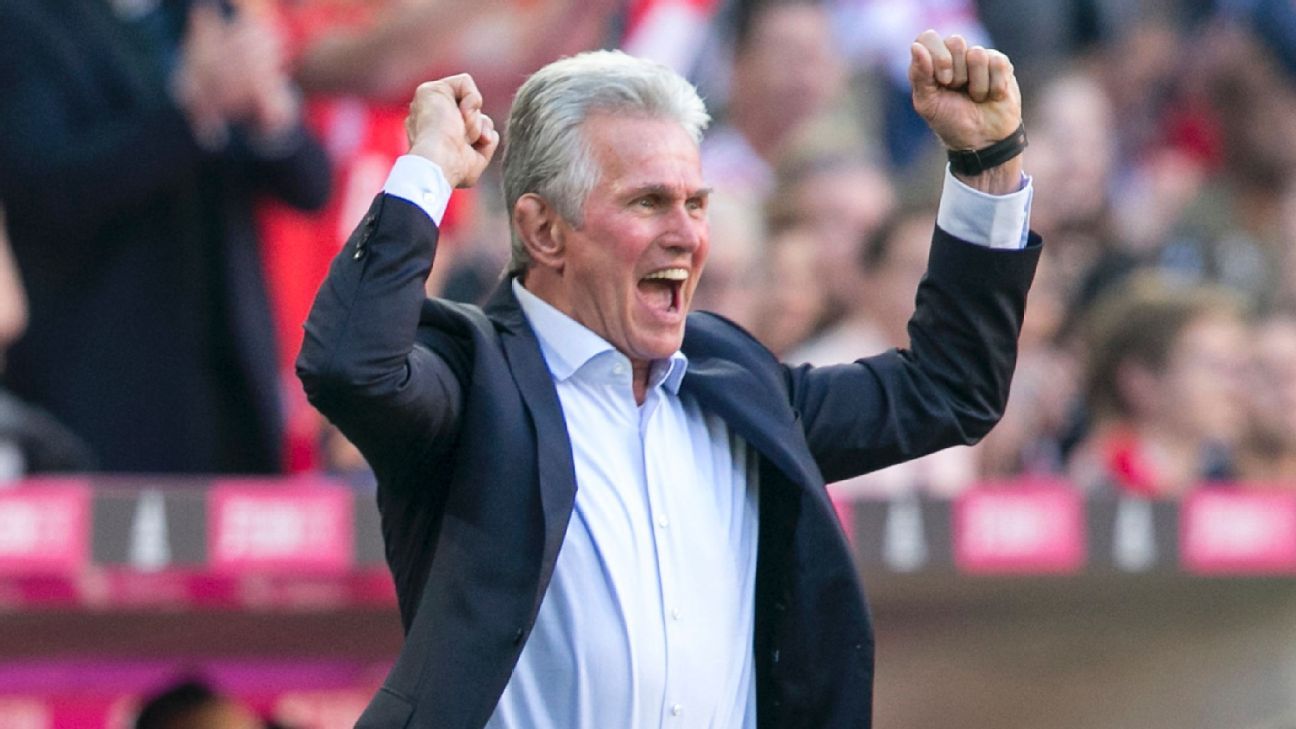 
Meet the new boss, same as the old boss.

Following a turbulent few weeks, Jupp Heynckes’ fourth spell in charge of Bayern Munich got off to a perfect start with a sumptuous five-star performance, crushing lowly Freiburg 5-0 courtesy of a Julian Schuster own goal and further strikes from Kingsley Coman, Thiago, Robert Lewandowski and Joshua Kimmich.

Bayern returned to winning ways following a turbulent few weeks, cruising to their 14th home win in a row against poor opposition in Freiburg, who were never likely to spoil Heynckes’ return.

They still look suspect against the counterattack — better teams than Freiburg will punish Bayern.

9 — Heynckes has won every opening game of all his four “debuts” as boss, and after just a few days in charge has seemingly breathed new life into what was a fractured Bayern unit.

GK Sven Ulreich, 7 — Buoyed by an impressive early save, which kept Bayern on level terms, the under-pressure Ulreich was not tested much thereafter.

DF David Alaba, 8 — Seemingly revitalised by having Heynckes back at the helm, full of running on the left, typified by a surging run which laid the groundwork for the opening goal.

DF Mats Hummels, 7 — Had a most untroubled afternoon, other than a couple of Freiburg counterattacks in the first half. Also provided the assist for Thiago’s delightful third goal.

DF Jerome Boateng, 7 — Injured against the same opposition on the final day of last season, but no obvious alarms this term. However, he was taken off with eight minutes to play; Bayern will hope it was just a precautionary move from Heynckes.

DF Joshua Kimmich, 8 — Played 23 consecutive games in a row over the full 90 minutes for Germany and is ever-present for the champions, too, teaming up with Arjen Robben for a rip-roaring partnership on the right. His lovely backheel for the fifth and final goal crowned a splendid day’s work.

DF Javi Martinez, 7 — Restored to defensive midfield duties by Heynckes, having starred in that position in Bayern’s 2013 Champions League success in 2013. However, he landed heavily on his shoulder and had to go off with 20 minutes remaining. He is likely to sit out Celtic in midweek.

MF Thiago, 9 — Another seemingly given an immediate new lease of life by Heynckes, running the show in midfield with grace and elegance, getting the goal his efforts deserved with a cool strike into the corner just after the hour mark.

MF Kingsley Coman, 7 — With Ribery set to miss the rest of the year, Coman is set for an extended spell in the side and the French youngster impressed, doubling Bayern’s fragile lead with a fine looping header from 11 yards.

MF Arjen Robben, 7 — After his international farewell, Robben was denied a goal despite a team best six shots, but he did have the consolation of setting up Coman’s header.

MF Thomas Muller, 7 — Given the opening goal by the stadium announcer, but soon chalked off and adjudged an own goal. Heynckes is confident he can rejuvenate captain Muller, who was largely anonymous under Carlo Ancelotti. Muller cleverly won the ball for Lewy’s goal before coming off to standing ovations on 78 minutes from the adoring home faithful.

FW Robert Lewandowski, 7 — Quiet by his supremely lofty standards, only caught the eye when he shook off the defender with ease before firing a composed finish for his ninth goal in eight league games this season.

MF Sebastian Rudy, 6 — Replaced the struggling Martinez for the final 20 as Bayern cruised through the gears.

MF Corentin Tolisso, N/R — Bayern’s record signing replaced the much-loved Muller and almost scored within minutes of his introduction, but was denied by the overworked Alex Schwolow in the Freiburg nets.