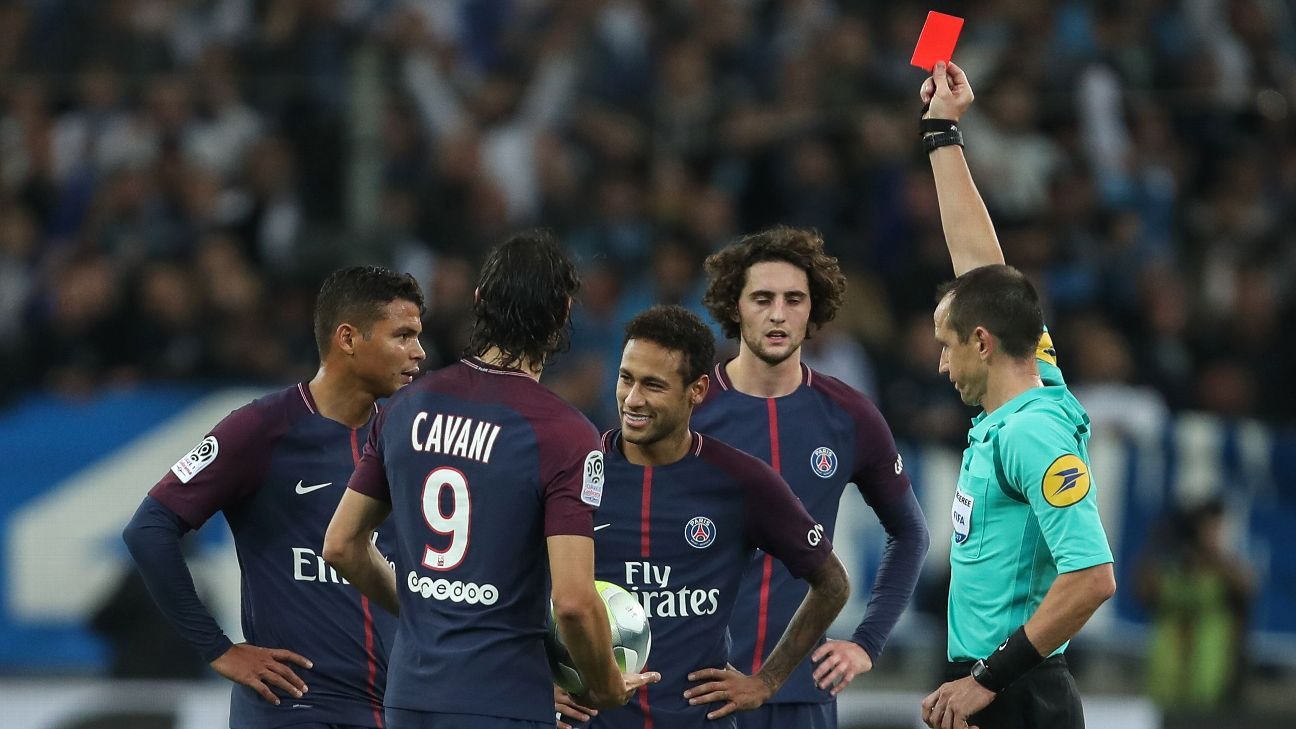 
So far, on paper, PSG’s season is almost perfect: 11 wins, including victories against Bayern Munich (3-0) and Lyon (2-0), two draws and no defeats, 43 goals scored and only 8 conceded. Yet, away from the stats and the numbers, the start of the PSG season is far from perfect.

The draw at Marseille on Sunday (2-2), snatched at the last minute by a wonderful free kick from Edinson Cavani, has highlighted once again the issues that are facing the team and Unai Emery, the manager. For the last three matches (Dijon 2-1, Anderlecht 4-0 and Marseille), Les Parisiens have displayed complacency and arrogance. They took those games for granted, assuming that they would win easily, even away from home, without having to play well or as a team. They took them slightly. They were lucky to get a win at Dijon in the last minute, their victory in Brussels was the most unconvincing 4-0 away win Europe has seen for a while and they were saved by the bell at the Stade Velodrome on Sunday.

Arrogance is very common in football and Zlatan Ibrahimovic would say that it didn’t harm his career at all. However, complacency is a much bigger issue. After some encouraging performances, like against Bordeaux (6-2), PSG have stopped playing as a team, especially against Marseille. There was no collective cohesion, no triangles, no movement off the ball. It looked like Neymar, Cavani and Kylian Mbappe were mostly attacking alone and that the remaining seven outfield players were just there to defend, get the ball back and pass it to one of the members of the “MCN”. And then wait for them to score. It is no surprise that the first PSG goal in Marseille came because Adrien Rabiot was involved and made a run from midfield to set up Neymar.

The theory that Neymar, Cavani and Mbappe, as amazing as they are, can win every single game on their own is not realistic. They will of course be brilliant and decisive most of the times maybe but you can’t just rely on them three alone. Against Marseille, the two full-backs (Layvin Kurzawa and Thomas Meunier) only managed five crosses between them for the whole game! For a team that has the ball as often as Paris, not having full-backs taking part offensively is ridiculous. But the defenders know that only too rarely Neymar and Mbappe will use their overlaps, as the two forwards don’t defend, and if they go forward as well, the team will be left too exposed. So they don’t go forward anymore.

You end up getting a disjointed performance from a disjointed team. The talent shone through in those last three matches obviously so Paris did well in terms of results but it won’t always be like that, especially in the last stages of the Champions League against teams and managers who will know exactly how to exploit this issue.

On Friday at the Parc des Princes against Nice, Neymar will be suspended after his stupid red card against Marseille. The Brazilian superstar got kicked all game, pelted by all sort of objects every time he took a corner and in the end, he lost it. He should not have reacted the way he did against Lucas Ocampos’ provocation. It maybe shows that not everything is right for him in Paris.

It will be interesting to see how the team copes when he is not there on Friday and if Paris play more as a team than like a sum of individuals. In his absence, Mbappe will have to do more and be better than on Sunday. But he will have to be careful not to overplay and try to do too much, which has been the case over the last few matches. He was dreadful against Marseille. He is trying too hard to be like Neymar and play like Neymar instead of just being himself.

In all of this, the question over the role and responsibility of Emery has to be asked. The manager has a luxurious squad at his disposal but at the moment, it doesn’t seem like he is in control. Tactically, his team is not showing much, to the extent that one is actually wondering what the manager does at training.

There are tensions between him and some of the players, according to reports in France, and his message is not getting across the dressing room well enough. As we have reached a quarter of the season, PSG clearly still are in second gear. It will be enough to win the league and probably the domestic treble as well. But when it comes to the Champions League, Les Parisiens will have to do much better than last week. Thankfully for them, they have enough time to sort out their issues before the knockout phases start in February.