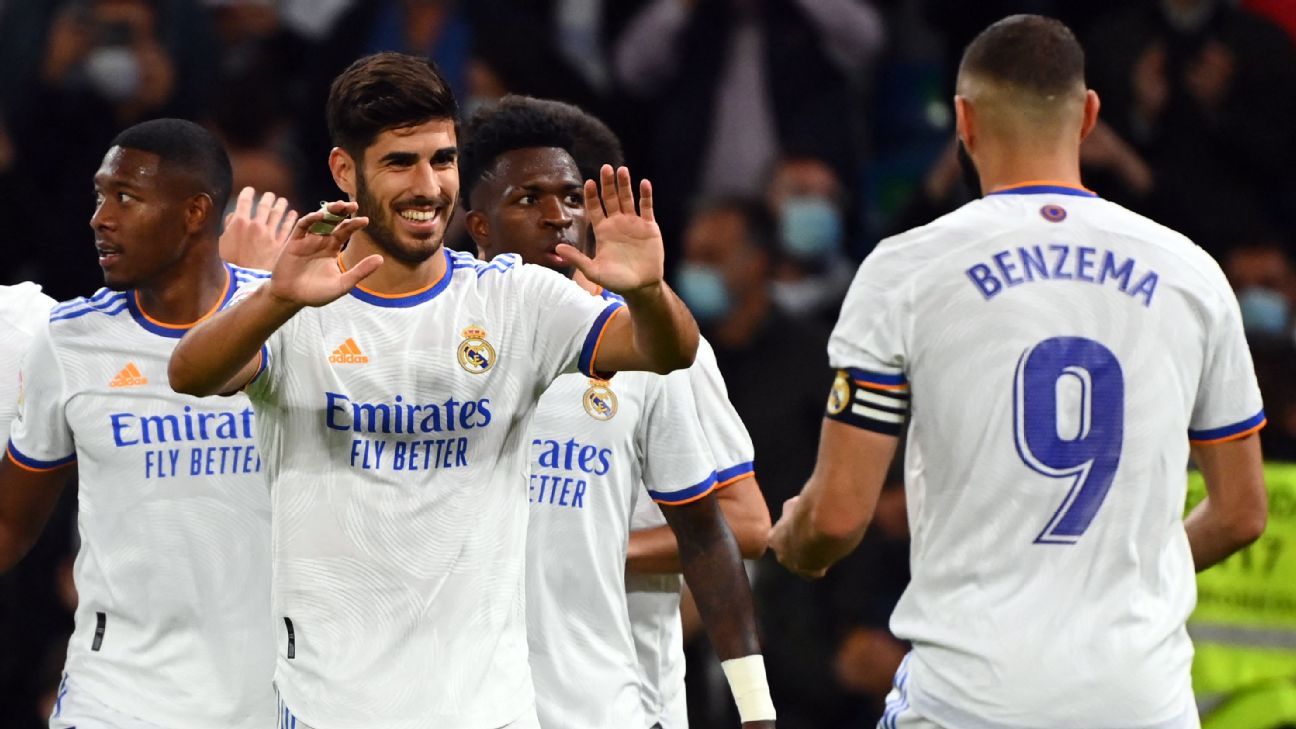 Marco Asensio scored his first Real Madrid hat trick — and Karim Benzema scored twice — in a 6-1 win over Mallorca on Wednesday that put the club top of LaLiga.

Benzema opened the scoring just three minutes in after a mistake by Mallorca defender Josep Gaya. Asensio went close to beating goalkeeper Manolo Reina direct from a corner before he made it 2-0, firing in Rodrygo‘s deflected cross. Kang In Lee pulled a goal back for Mallorca a minute later, and Asensio added Madrid’s third before half-time when played in by Benzema.

After the break, Benzema had a goal ruled out for a push on defender Joan Sastre and Rodrygo could have been awarded a penalty when he was brought down at the near post before Asensio completed his hat trick from distance. Benzema got his second after David Alaba‘s ball over the top — making it eight goals and seven assists this season for the forward, LaLiga’s best in both categories — and substitute Isco completed the rout.

There were suggestions this week that Marco Asensio is unhappy at his limited action so far under Carlo Ancelotti. This was his first time in the starting XI, and it was the best possible response to that lack of minutes. He scored three and could have had more. The coach fancies Asensio as a midfielder — there’s too much competition out wide and playing infield allows him to break from deep — and on this evidence, he might be onto something.

Eduardo Camavinga couldn’t have made a better impression in a Real Madrid shirt so far. The 18-year-old had already scored on his LaLiga debut and created a winning goal in the Champions League. Tonight he did a very passable Casemiro impression at the base of the Madrid midfield, right down to the occasional foray forwards. He plays without fear, appears to be thoroughly enjoying himself, and there’s so much more to come.

While Madrid were electric going forward here, their defending — especially in the first half — still left a lot to be desired, as it has throughout this season so far. Mallorca are easy-on-the-eye in attack with gifted players such as Take Kubo and Lee, but they still shouldn’t have created the chances, and found the space, that they did.

8 — Ancelotti made four changes to the team that grabbed a late win at Valencia on Sunday, including the enforced absence of the injured Dani Carvajal. Casemiro, Luka Modric, and Eden Hazard all dropped to the bench with Miguel Gutierrez, Camavinga, Asensio and Rodrygo coming in. This was a night when almost everything went Real Madrid’s way, and Camavinga, Asensio and Rodyrgo all more than justified their inclusions, while Ancelotti’s substitutes — especially Isco — played their part too.

GK Thibaut Courtois, 7 — Well beaten by Lee. Otherwise had very little to do until one excellent 90th minute stop.

DF Nacho, 7 — Perhaps a little fortunate not to concede a penalty for his first-half challenge on Matthew Hoppe. Has now played centre-back, left-back and right-back already this season.

DF David Alaba, 8 — His first home game at the Bernabeu. A gorgeous long pass played in Benzema for Madrid’s fifth, showcasing his ability on the ball.

DF Eder Militao, 7 — Following Alaba’s example, he looks increasingly confident and progressive with the ball at his feet.

DF Miguel Gutierrez, 7 — Solid, without catching the eye as much as he has in other games.

MF Fede Valverde, 7 — Played on the left of the midfield three. Plenty of energy right the way through the 90 minutes.

MF Eduardo Camavinga, 8 — His first Real Madrid start after three successful sub appearances. Some lovely touches in the hour he spent on the pitch. What a bargain he looks already.

MF Marco Asensio, 9 — Took all three of his goals really well — the third the best of the lot — and could have scored four or five. Looks suited to the inside-right position that Ancelotti is trialling. Needs to build on this performance now.

FW Rodrygo Goes, 8 — Rewarded for his goal against Internazionale a week ago with a place in the team. Created Asensio’s first goal with some neat wing play and crossed for Benzema’s disallowed effort. Could have had a second-half penalty.

FW Vinicius Junior, 8 — Full of confidence, with five goals in five league games before this. Combined superbly with Benzema more than once in the first half. Kept his head to set up Isco for Madrid’s sixth goal.

FW Karim Benzema, 9 — The best player in LaLiga — and arguably anywhere — right now. Gifted the chance to score early and didn’t miss. Set up Asensio for his second and third, and then got another goal himself. In the form of his life.

MF Antonio Blanco, 6 — His first minutes this season, playing in his natural position of holding midfielder.

MF Isco, NR – One sensational piece of skill to get out of trouble and scored a tap in when set up by Vinicius. Even ended up wearing the captain’s armband.

DF Sergio Santos, NR — The youngster made his debut at right-back.

Court hears Emiliano Sala flight organiser hired ‘unqualified’ pilot
Arsenal look to RB Leipzig’s Christopher Nkunku
Marseille vs. Paris Saint-Germain – Football Match Report – October 24, 2021
Has Solskjaer turned Man United around? And is he the right person to take the club forward?
Barcelona need Ansu Fati and he couldn’t be happier to be the new star to turn the club around