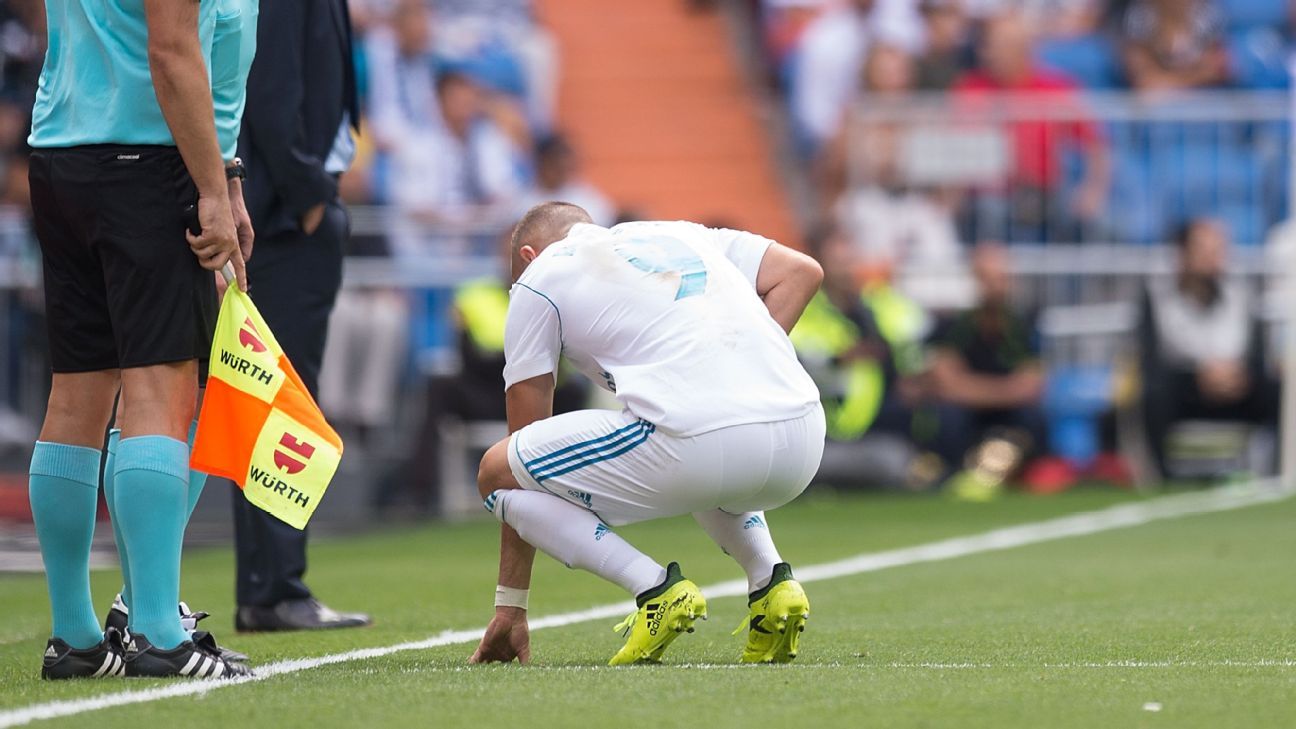 
Real Madrid coach Zinedine Zidane faces further fall-out from Saturday’s 1-1 La Liga draw at home to Levante, with Karim Benzema set to be sidelined for around a month with a thigh muscle injury and Marcelo facing a suspension of at least two games after being shown a straight red card.

Madrid dropped points at home for the second consecutive game with an under-par showing against newly promoted Levante at the Bernabeu, with Zidane admitting afterwards that his team “had not played well” and “needed to improve,” particularly in attack.

Benzema — the squad’s only senior specialist centre-forward — limped off the pitch midway through the first half, being replaced by winger Gareth Bale who missed a number of straightforward chances in a disappointing display in the No. 9 role.

Benzema underwent hospital tests after the game, with the club releasing a statement saying he had suffered a hamstring injury, which AS reported would see him sidelined for four to six weeks out.

“Following tests carried out on Karim Benzema at the Sanitas La Moraleja University Hospital, he has been diagnosed with a muscular injury in the semimembranosus [hamstring] of his right leg,” the statement said. “His recovery will continue to be assessed.”

Madrid vice-captain Marcelo, meanwhile, was sent off for kicking out at Levante midfielder Lerma when both players were tangled on the ground following a challenge inside the visitors’ penalty area.

The official report filed by referee Alejandro Jose Hernandez Hernandez confirmed the action had been spotted, and depending now on the interpretation of the Spanish federation’s disciplinary committee, the Brazil international will likely receive a ban of between two and four games.

“In the 89th minute of the game the player (12) Vieira Da Silva Junior, Marcelo was sent off for the following reason: kick an opponent in the back, with the ball well away from the action,” the report read.

Madrid regularly appeal disciplinary decisions handed out by the Spanish authorities, as they did following the recent five-game ban handed out to Cristiano Ronaldo, who is due to return to the starting XI for Wednesday’s Champions League Group H opener against Apoel Nicosia at the Bernabeu.

The Levante game was the first of seven games in 22 days for Madrid across La Liga and the Champions League.

Zidane rested a number of senior players against Levante, including Keylor Navas and Luka Modric, who are also set to come back into the line-up midweek against the Cypriots.