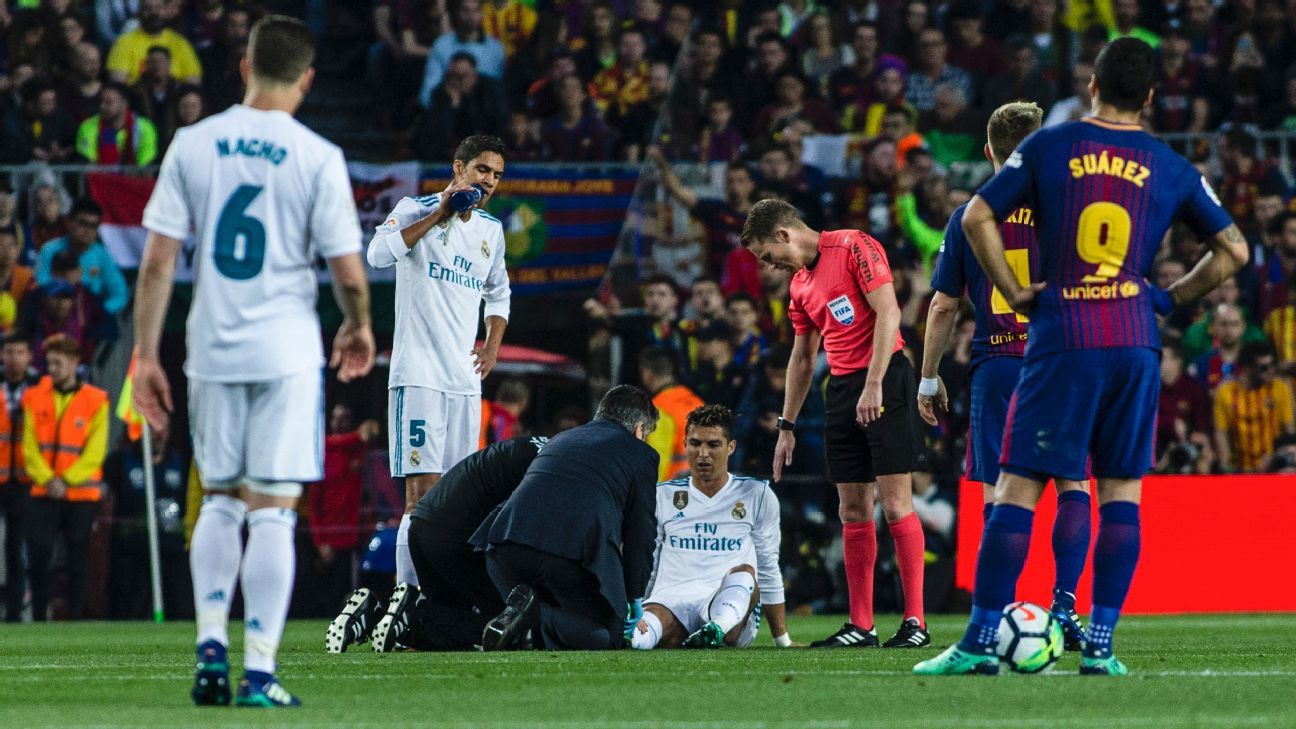 
Real Madrid star Cristiano Ronaldo has no danger of missing the Champions League final against Liverpool through injury, according to coach Zinedine Zidane who has hailed the Portugal captain’s “incredible” powers of recovery.

Ronaldo hurt his right ankle while scoring early in Sunday’s 2-2 Clasico draw at Barcelona, and was substituted at half-time, immediately raising fears he could miss the clash with Jurgen Klopp’s side on May 26.

However, Blancos coach told the news conference ahead of Wednesday’s trip to Sevilla that he expected all of his players — including currently sidelined Isco and Dani Carvajal — to be fully recovered for the trip to Kiev.

“Everyone will be okay for the final — Cristiano, Isco and Carvajal,” Zidane said. “Cristiano is the one who will be out longest, as it just happened two days ago. But he is good, walking normally. Isco trained with us normally, Carva is still a bit away, has not trained with us yet, but physically he is working well. Nobody will have any problems for the final, they will all be at 150 percent.”

Zidane said Ronaldo’s personal determination to be back in time for the Champions League final was clear from how he had already quickly begun the recovery process, although it was too early yet to say if the 33-year-old would play in Madrid’s final 2017-18 La Liga game at Villarreal on May 19.

“What is incredible is that he is already walking around perfectly so soon after the injury,” he said. “There is a strain, but no big damage. The ankle is stable. We do not know when he will be back with the group, but he has that motivation and ambition to always want to play. We do not know yet if he will be back for Villarreal, but it would be perfect to have everyone ready for that final La Liga game.”

Following a week which saw Madrid’s senior players edge past Bayern Munich in the Champions League semifinals, and then Sunday’s Clasico at the Camp Nou, Zidane is expected to heavily rotate for Wednesday’s trip to a Sevilla side who need the points to secure Europa League qualification for next season.

Youngsters Jesus Vallejo, Marcos Llorente, Dani Ceballos and Borja Mayoral could all come into the starting XI for the game at the Estadio Sanchez Pizjuan, with Gareth Bale among those rested after the Wales international’s third child was born early on Tuesday morning.

Zidane said that his plans for rotation were more about sharing out the workload among his entire squad, not hoping to avoid injuries to key players.

“In the end I do not think about injuries, or what might happen to a player before the Champions League final,” he said. “I have 25 players, and some will rest, must rest sometimes, but not thinking they will get injured. Thinking that way is not good, we must be positive. And when it happens, for example with Cristiano, which is not a serious thing, we get him back as soon as possible. This is football, we cannot control it.”

Liverpool were a typical traditional English-style team, Zidane suggested, while not getting into whether he thought that Reds star Mohamed Salah could challenge Ronaldo and Barca’s Lionel Messi for the 2018 Ballon d’Or.

“We know what they have, physical, technical, pace, a bit of everything,” the Frenchman said. “An English team, who defends, who fights, know how to do that. I don’t know if he is in the running for a Ballon d’Or, but Salah is a great player, has had a great season, although he is not my player. I don’t want to talk about Cristiano vs. Salah, just Madrid against Liverpool.”

Zidane was also asked repeatedly about Messi’s behaviour in last weekend’s Clasico, including the Argentina captain allegedly having insulted the referee during the half-time break.

“I am not going to talk about that, that stays with the players on the pitch,” Zidane said. “The problem is that today you all know, there are many cameras, and comments from many players. Before many things happened too, but it stayed more in the dressing room. But I’m not here to talk about that now.”