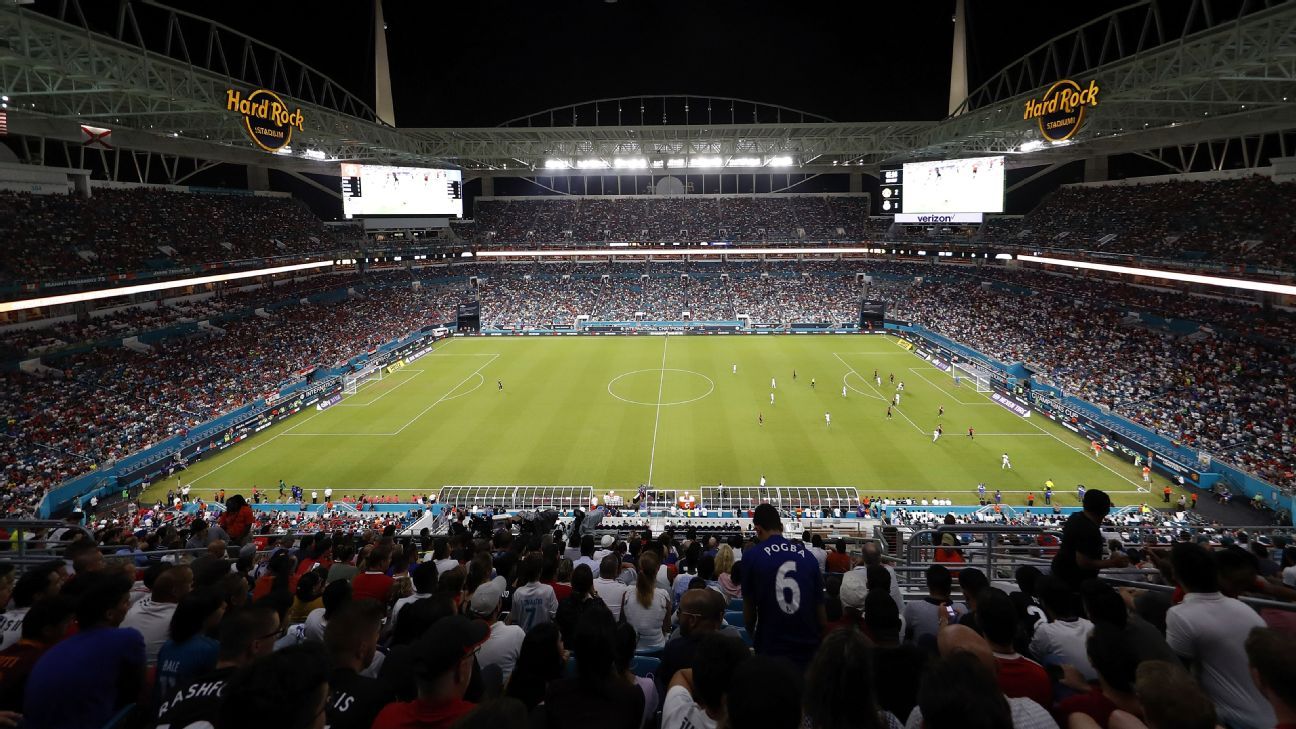 
Real Madrid has written a letter to the Spanish football federation (RFEF) expressing their opposition to La Liga’s plans to stage a game between Girona and Barcelona in the United States in January.

The game, which would take place in suburban Miami, would be the first regular-season game held overseas as part of a 15-year marketing agreement struck between La Liga and Relevent Sports with the aim of promoting the league in North America.

The RFEF and the Spanish players’ union oppose the plan to move the game, scheduled for Girona’s Estadi Montilivi on Jan. 26, to Hard Rock Stadium. FIFA president Gianni Infantino has also said he does not support the idea.

“First of all, we would like to declare that Real Madrid were never informed that La Liga had requested to play the game, nor of the intention to make the request, and we were never asked our opinion on it,” Madrid wrote in the letter, which was signed by Jose Angel Sanchez, the club’s general director.

“Nor, obviously, did La Liga obtain Real Madrid’s agreement, despite the fact that this game affects a competition in which we participate.”

A spokesman for La Liga told Reuters on Wednesday that no club would be forced to play in the United States and that the decision to do so is voluntary.

The RFEF has told the league it cannot approve the proposal, which also requires support from UEFA, CONCACAF and U.S. Soccer, until it receives more information.

Madrid president Florentino Perez has also spoken out against it, and coach Julen Lopetegui has said “every [La Liga] team should play at every ground.”

Madrid addressed the same concerns in the letter, which was first published by Cadena Ser and also included a list of objections to La Liga’s current marketing strategy and television broadcasts in the U.S.

“We cannot forget that the national league is a competition in which 20 teams participate, not two, and that it is fundamental that every team plays each other twice, home and away and at each stadium, as that guarantees the integrity and the equality of the competition,” the club wrote.

“As a consequence, Real Madrid expresses its opposition to the request made to play the game at the Hard Rock Stadium in Miami as it affects the integrity and equality of the competition.”

La Liga president Javier Tebas told Reuters earlier this month there were many things that could threaten the integrity of a competition but the Miami game was not one of them.

“In a World Cup, a team playing a … semifinal on Tuesday has a greater advantage in the final than the team playing on Wednesday,” Tebas said.

“Teams have also played at other stadiums while their grounds are being renovated or in order to generate more revenue. If we really believe in this sporting puritanism, then we would need to make many changes in football.”