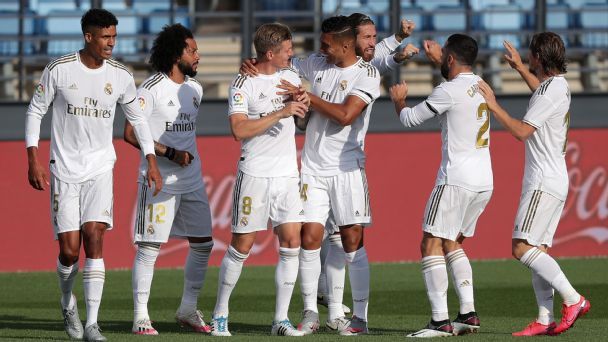 
Real Madrid cruised past Eibar 3-1 in the clubs’ first game back from a three-month hiatus due to the coronavirus pandemic on Sunday.

Toni Kroos got the hosts off to a fast start at the Alfredo Di Stefano Stadium when he beautifully slotted home from the edge of the box after some fine work by Karim Benzema near the goal line in the fourth minute.

Sergio Ramos added a second with a sensational effort on the half-hour mark. After intercepting a pass deep in his own half, the centre-back drove forward, played the ball to Benzema, who found Eden Hazard with only the keeper to beat. But instead of shooting, the Belgium international laid off for Ramos, who’d continued his run, to fire home into a gaping net.

Marcelo made it 3-0 seven minutes later, firing home from nearly the same spot as Kroos after a poor clearance attempt bounced directly into his path on the left. The Brazilian celebrated the goal by dropping to a knee and putting a fist in the air.

Pedro Bigas pulled a goal back on the hour after his shot from the edge of the area squeezed through a thicket of defenders and past a helpless Thibaut Courtois.

With Real’s Santiago Bernabeu stadium being revamped, Real re-started the campaign at the 6,000-capacity Di Stefano stadium where their reserve side play.

Real are usually greeted by a throng of supporters when their bus arrives at the Bernabeu but they faced a far more relaxing journey on Sunday as they walked 300 metres from their residency at the training ground to the stadium.

The match marked manager Zinedine Zidane’s 200th in charge at the club and moved Los Blancos back to within two points of Barcelona atop the La Liga table with 59 points from 28 matches.

With their long-awaited restart out of the way, Real will next face seventh-placed Valencia at home on Thursday. Eibar, who are 16th, will host Athletic Bilbao on Wednesday.

Information from Reuters contributed to this report.