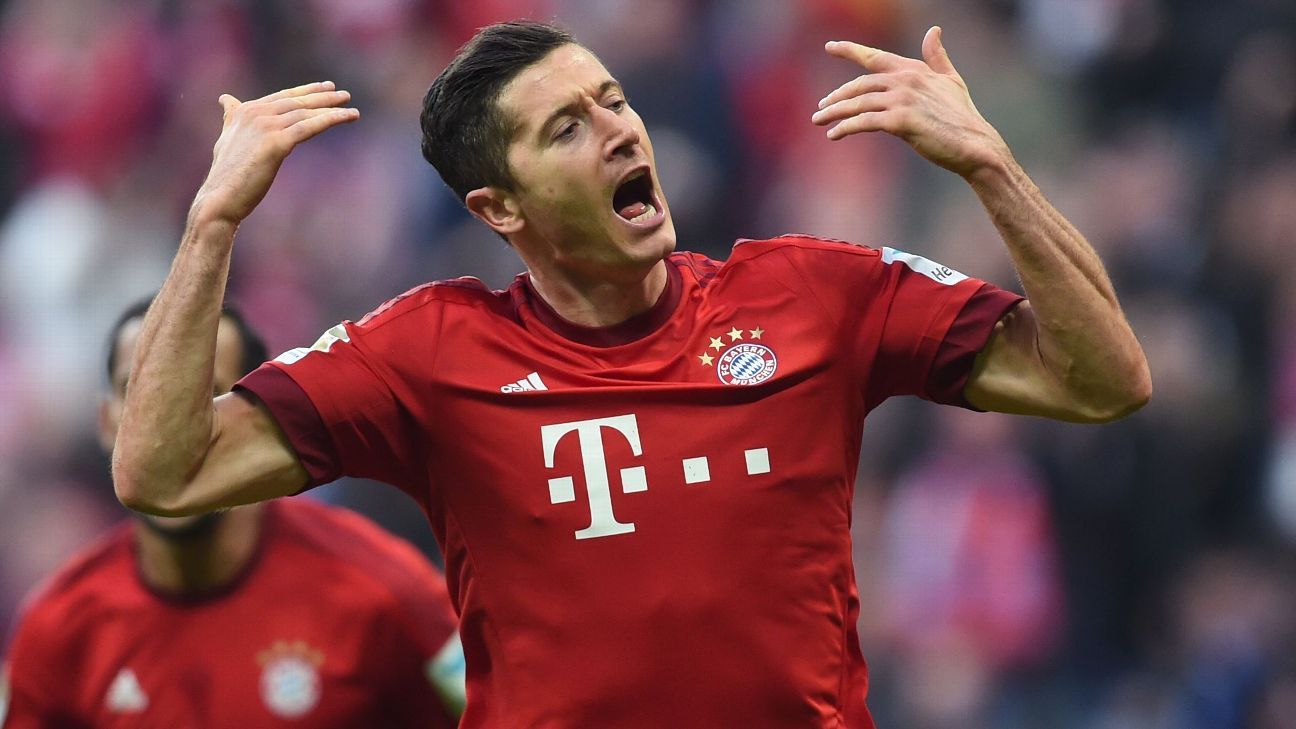 Madrid to turn to Lewandowski

Are Chelsea favourites to sign Robert Lewandowski? Not necessarily, according to the Independent, which says Real Madrid are ready to move for the Bayern Munich striker.

Madrid have switched their focus to the Poland international because of “the difficulty involved in signing Harry Kane from Tottenham Hotspur.”

The Liga and Champions League holders are planning a big summer overhaul after a disappointing domestic season that has seen them fall well behind Barcelona.

The Independent says they “want to bring in primary objective Neymar from Paris Saint-Germain along with a goal scorer and a new goalkeeper” — and Lewandowski is seen as the player to fill the striking role.

Madrid president Florentino Perez “has long been a fan of Lewandowski,” reported to be keen to leave Bayern, and has switched his attention to him after deciding that a move for Kane would be all but impossible.

Manchester United’s chances of keeping midfielder Marouane Fellaini beyond the end of the season are evaporating, the Mirror reports.

United “are bracing themselves for defeat” in their attempts to retain the Belgium international, who is out of contract at the end of the season.

Manager Jose Mourinho had previously said the club were optimistic that they would be able to keep Fellaini, but the Mirror says “United chiefs are increasingly resigned to him leaving on a free.”

It adds that clubs in Italy, Spain and Turkey “are all keen to snap him up.”

Chelsea remain hopeful of persuading goalkeeper Thibaut Courtois to sign a contract extension amid continuing links with Real Madrid — but they are going to wait a little longer to find out whether he does.

The London Evening Standard says talks with Courtois are on hold until after two vital matches next month.

Chelsea travel to Barcelona in the Champions League and face Leicester in the FA Cup quarterfinals, with the two competitions providing their last chances of a trophy this season.

Courtois has a little over a year left on his contract, and the Standard says “Chelsea have intimated that they will pay him in excess of £200,000-a-week to sign an extension.”

It adds that the Blues “are under pressure to finalise terms, with Real Madrid monitoring the situation” but both club and player “agree that the timing for talks is not right with so much at stake.”

– Joel Campbell wants to make his loan move from Arsenal to Real Betis into a permanent transfer at the end of the season, the London Evening Standard says.

Campbell has been at Arsenal since 2011 but has struggled to win a place in the side and the Standard reports that he hopes Betis — for whom he played on loan in 2012-13 — can sign him full time as he looks to “bring his association with the Gunners to an end.”

– Bad news, potentially, for Leicester and Wolves, both of whom are interested in Benfica midfielder Rafa Silva — the player’s agent has said other clubs are keen, TalkSPORT reports.

Leicester are thought to lead the way in the race for the Portugal international, but agent Antonio Araujo has suggested that other Premier League sides want to sign him.