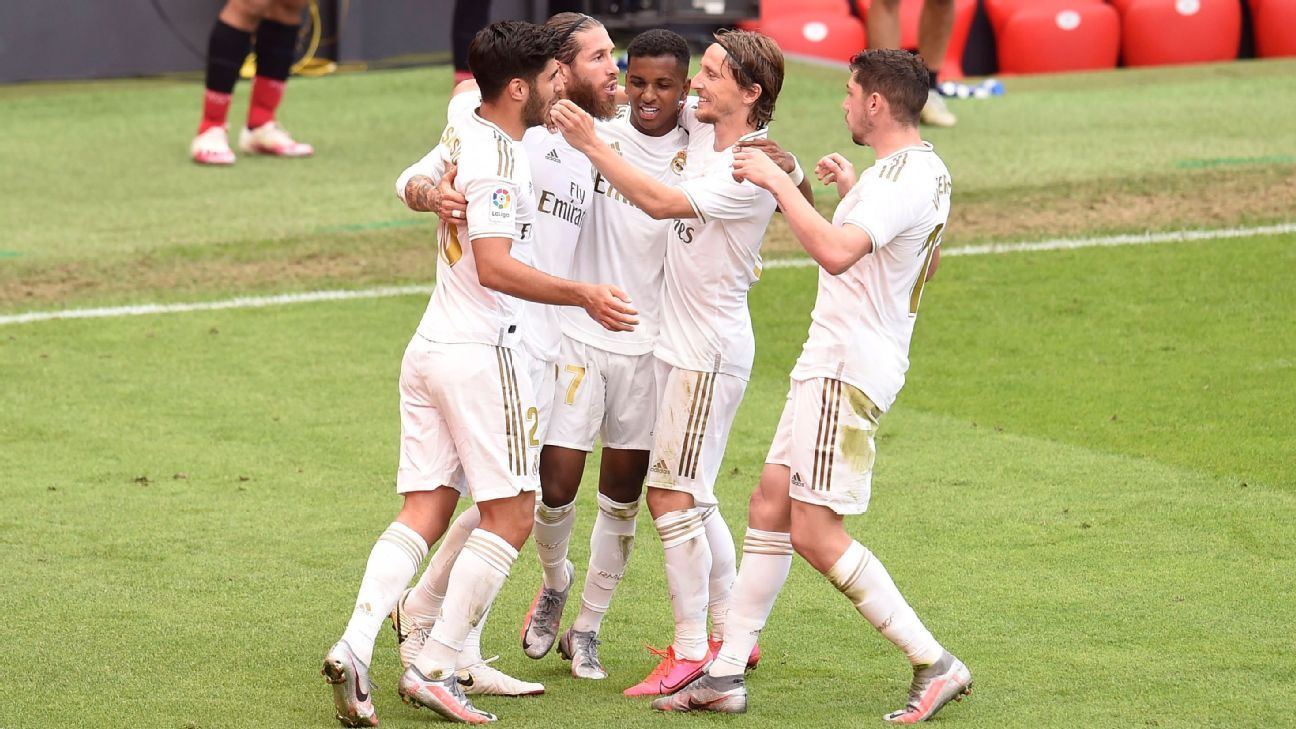 
Sergio Ramos scored another penalty as Real Madrid won 1-0 at Athletic Bilbao on Sunday to maintain their 100% record since the restart and take another step towards the La Liga title.

Marco Asensio saw an early free kick saved by Athletic keeper Unai Simon before Thibaut Courtois reacted well to keep out a Raul Garcia header. Asensio had a busy first half, crossing for both Rodrygo and Karim Benzema to head off target.

With 20 minutes to go, Marcelo was caught by Dani Garcia inside the box and Ramos put the penalty in the bottom corner for his 10th goal of the season and his fifth in the last month.

Seven games played; seven Real Madrid wins. This was one of the more difficult tests the team will face in this final stretch — away from home, in the mid-afternoon sun, against an awkward Athletic chasing European football — and, once again, Zinedine Zidane‘s side delivered.

The performance of Asensio in his first start of the season was encouraging too. Eden Hazard‘s injury problems mean there’s a spot up for grabs on the left of the attack and Asensio did enough here, especially in terms of end product, to suggest he has a case to start ahead of Vinicius Junior.

Real Madrid were far from dominant at San Mames and, in the first half in particular, their defence was tested as much as it has been at any point since the resumption of La Liga. Inaki Williams was a constant threat, Raul Garcia was a nuisance, and it was only a combination of the offside flag and some last-ditch defending that enabled Madrid to keep a clean sheet.

7 — Zidane made five changes to the team that beat Getafe on Thursday with Eder Militao and Marcelo coming into the defence, Fede Valverde in midfield and Asensio and Rodrygo in attack. The only genuine surprise was the resting of Toni Kroos, who tends to offer the team more midfield control, and the German was missed. Zidane held off making any changes until Madrid scored, when he added fresh legs out wide in the form of Vinicius and Lucas Vazquez.

GK Thibaut Courtois, 7 — Another clean sheet, his 17th of the season, for arguably the best goalkeeper in Spain this year. One good first-half save from Garcia.

DF Dani Carvajal, 7 — Showing no signs of fatigue despite starting all seven games since the restart, although he was beaten in the air by Garcia for Athletic’s best early chance.

DF Sergio Ramos, 7 — Another game, another penalty. It wasn’t the captain’s best game, there were lapses of concentration at times, but that will be forgotten. A booking means he’ll miss the Alaves game.

DF Eder Militao, 7 — His first start since Madrid’s 2-1 defeat to Betis in March. Militao has struggled to justify his €50m price tag this season but there were signs of improvement here, such as a perfectly-timed first-half intervention to steal the ball from Williams.

DF Marcelo, 7 — Did well to block Williams’ first-half shot, not knowing the forward was offside, and did well in attack, but was otherwise exposed defensively as Athletic targeted the space behind the Brazilian.

MF Casemiro, 8 — So important in games like this. Always cool in possession and always busy when out of it. Booked late on for a challenge on Muniain.

MF Fede Valverde, 6 — Still hasn’t found his best form since La Liga resumed. Offers energy and work rate but not as influential as he was earlier this year.

MF Luka Modric, 8 – Works so hard, despite starting five games in three weeks at the age of 34. Zidane might like to rest Modric more often, but the midfielder is simply too important.

FW Marco Asensio, 7 — An eye-catching display. Looked hungry to make an impression in his first league start since May 2019. Involved in all of Real Madrid’s best first-half chances, going close with a free kick and finding both Rodrygo and Benzema with pinpoint deliveries.

FW Rodrygo Goes, 7 — Zidane loves the young Brazilian’s pace and intelligent movement. Missed a decent first half chance, heading over from a difficult angle. One lovely second half touch to skip past Athletic full back Yuri.

FW Karim Benzema, 6 — Couldn’t add to a tally that has seen him score or assist more goals against Athletic Bilbao than any other La Liga club. Missed a difficult first half header. Saw a late shot saved by Simon.

FW Luka Jovic, NR — Made his first appearance since recovering from a broken foot in added time.