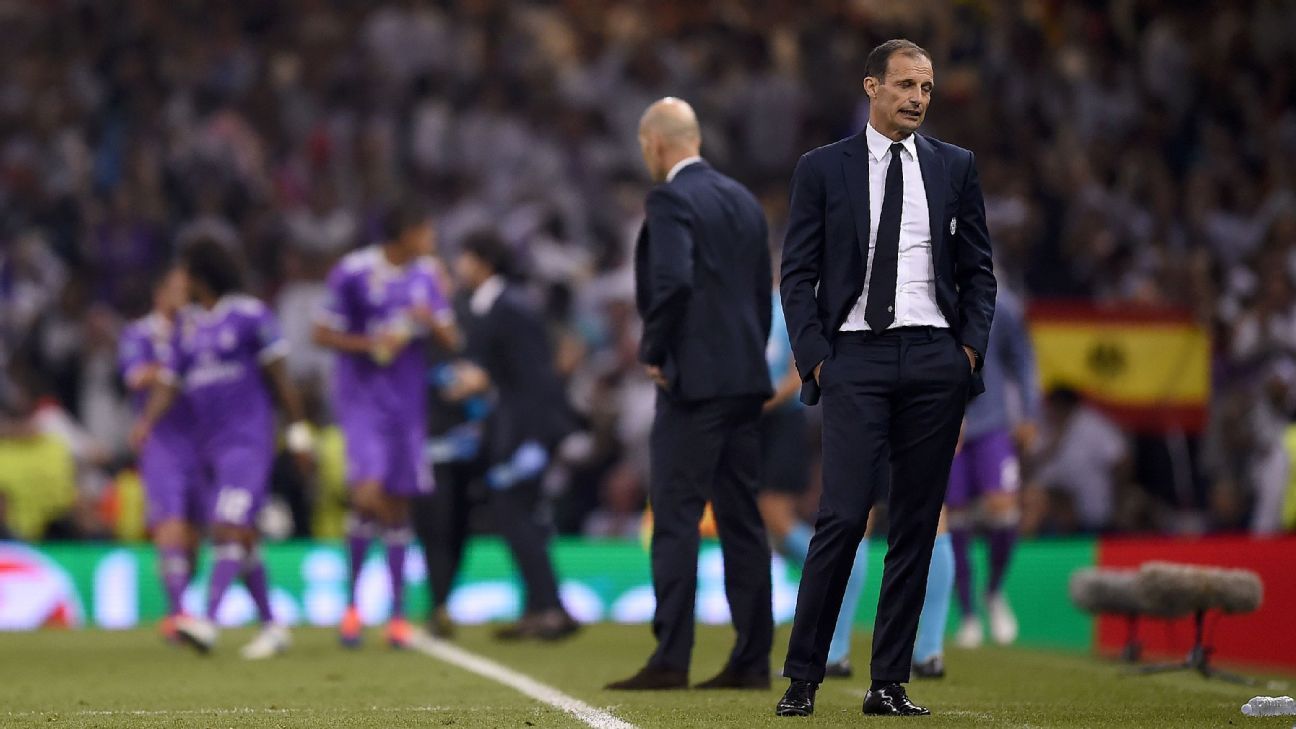 
Real Madrid ripped Juventus to shreds with a scintillating second-half display to win their 12th European Cup in Cardiff on Saturday night.

The Italians had largely managed to repel the Spanish champions in the first period, thanks to Massimiliano Allegri’s 4-4-2 shape. Their only weak spot seemed to be right-back Andrea Barzagli, who got targeted by Karim Benzema and Isco.

That did not prevent Cristiano Ronaldo from scoring the opener, but Juve responded by equalising with an attack down the left, aware that Madrid’s narrow midfield diamond would make it difficult to protect the flanks.

After the interval, Zinedine Zidane upped the tempo and told his players to press more, which overwhelmed Juve. A deflected Casemiro strike was followed by another Ronaldo goal, before a late Marco Asensio finish wrapped up Madrid’s first double since 1958.

The tactical battle centred on two different 4-4-2 systems. Allegri started the 36-year-old Barzagli at right-back and played Dani Alves just ahead, while Zidane switched to a diamond shape in order to use Isco behind Benzema and Ronaldo.

The challenge for Juve was thus to stop Madrid’s four-vs-two advantage in the middle, and Allegri had a plan. When Marcelo and Dani Carvajal had the ball, the nearest Juve winger would close him down, while the rest of the midfield shuffled across. The opposite winger would also tuck inside to mark a third central midfielder. So if Marcelo had the ball, Sami Khedira and Miralem Pjanic would pick up Toni Kroos and Isco, while Mario Mandzukic marked Luka Modric. That handled the three playmakers, leaving one of the strikers to watch Casemiro.

This stopped Madrid playing their way through the centre, with Isco forced to drop deep or out wide to get involved. Alves did a good job on Marcelo, while also tucking inside: until he was switched to right-back on 66 minutes, his tackles took place in central positions.

But Mandzukic found it tougher to track Carvajal. A natural striker, he was prone to quick switches of play, and a few diagonals set up Carvajal in one-on-one duels with left-back Alex Sandro. This happened on 20 minutes, when Madrid countered and found Ronaldo on the right. Carvajal had charged forward, with Mandzukic trailing, and as Sandro closed him down, he played a pass inside to Ronaldo who converted Madrid’s first attempt via a deflection off Leonardo Bonucci.

That move punished a Juve weak spot, but Madrid were not immune themselves. While they had the superiority centrally, Juve had a two-vs-one situation down the flanks.

This was largely harmless down their right, as Barzagli hardly attacked. But opposite, Brazilian wing-back Sandro raced forward to trouble Carvajal alongside Mandzukic. When the game kicked off, the very first thing Juve did was to hit a long ball towards this zone.

They kept going down this route. Whenever Mandzukic stayed wide, as was common at the start, Madrid reacted by moving either Modric or Isco across to pick up Sandro, though neither could match his power and pace. There seemed to be no clear system for who should be doing this job — at one point, Ronaldo could be seen tracking him — and Madrid were often too slow to close him and Mandzukic down. The first big Juve chance did indeed come when a Mandzukic cross was cleared to Pjanic, who tested goalkeeper Keylor Navas with a low drive.

After Ronaldo’s opener, Juve grew into the game and moved Mandzukic into the box more often. On 27 minutes, Sandro volleyed a Bonucci diagonal into the area, where Gonzalo Higuain set up a spectacular Mandzukic volley that arched over Navas and into the net.

After that goal, Juve continued to dominate, and Sandro soon went past Isco to win a corner. Things did not look any brighter for Madrid when Carvajal got booked for going in late on Mandzukic. The Italians created less after the break, but Sandro remained one of their best weapons, and most of their crosses took place down his flank.

Down the other end, Madrid targeted the ageing Barzagli. Zidane started off by moving Benzema out wide in order to skip past him and, inside six minutes, the Frenchman had already had three attempts. Neither succeeded.

Instead Madrid figured out that Barzagli struggled more when forced to run towards his own goal. Soon Isco ran onto a long ball behind him and set up a misdirected Ronaldo diving header. Just after the break, Marcelo lofted two passes above Barzagli in quick succession: one released Ronaldo, another found Isco, who was only denied by a surgical Barzagli intervention.

This must have concerned Allegri and, when the coach responded to going 3-1 down, it was Barzagli who came off for Juan Cuadrado.

As all this happened, Madrid were putting Juve under pressure. They pressed higher and more aggressively in the second half, forcing dangerous turnovers and denying Juve time to play their way out. Within 15 minutes, Modric, Isco and Marcelo had all recorded attempts.

As it was, the second goal came when a blocked Kroos shot fell to Casemiro, whose deflected strike spun past Gianluigi Buffon. It was lucky, but also a reward for Madrid’s dominance.

At that point Allegri wanted a strong response, but Madrid kept pressing. Their third goal, on 64 minutes, came when Modric intercepted a ball high up the pitch — denoting their approach in the second half — ran down the line and found Ronaldo at the near post.

“They raised the tempo, as we were the ones pushing Real Madrid back in the first half,” Allegri said. “But in the second we couldn’t play our way out of defence and they kept pushing us back.”

Juve never really responded. Allegri introduced Cuadrado, Claudio Marchisio and Mario Lemina, but Cuadrado got sent off, and the Italians only recorded a single effort in the entire half. Instead substitute Asensio made it 4-1 to seal Madrid’s third Champions League title in four years.