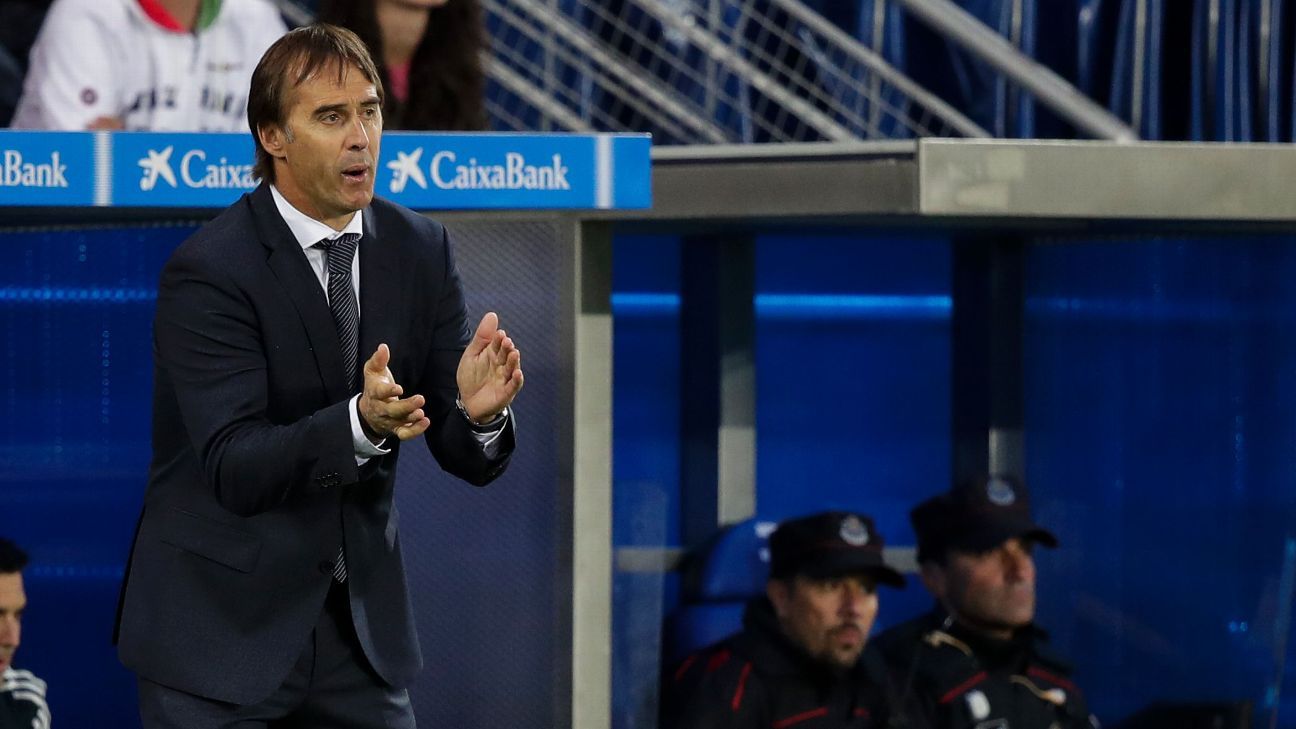 
It doesn’t matter how much the headlines splashed across Spain’s football papers scream for it. Real Madrid’s solution is not to sack their coach, Julen Lopetegui. At least, that’s not the solution to what truly ails Los Blancos.

Might current form become an excuse for Florentino Perez to feel his trigger finger getting itchy? Likely, yes. Is the near-record goal drought perfect fodder for the short-attention-span, agenda-driven hawks who permeate Spanish football’s print, radio and television media? Unfortunately so, but there’s a much clearer way to assess Madrid’s situation.

After all, a “sack the coach!” decision must not come after eight league matches, not when Los Blancos are a mere two points behind Sevilla (who haven’t led La Liga on their own since the 1940s) or tied with humble Alaves.

In other words, this is a freakish moment.

Nor can the same media organisations who, without exception, drooled over Julen Lopetegui’s Madrid when they beat Roma 3-0 on Matchday 1 of the Champions League maintain any credibility if they now wield their metaphorical knives.

Diario AS said about that match: “The same Roma that wiped Barça off the map five months ago, preventing [Lionel] Messi from touching the ball, were smashed aside last night by a side playing football like that of Ajax in the 1970s.”

Marca’s take? “White Spectacle! With performances like this, there’s no need to remind ourselves of the glorious past: This was a recital from start to finish.”

This time last season, Real Madrid (who went on to win a third straight European crown) were three points and three goals better off. Hardly a chasm between then and now. A year ago, they’d already dropped seven points at home thanks to draws against Levante and Valencia plus a defeat, for the first time in a quarter of a century, to Betis at the Bernabeu. Although they’d scored three more goals by their eighth league game and won both Champions League matches to that point, Madrid were about to be taught a severe football lesson by Tottenham across the following two group games (one point registered and four goals conceded).

Then they hit rock bottom — akin to this weekend’s Alaves experience, one might argue — when being comprehensively out-played, out-scored and out-run at Girona in another defeat that, just like the Mendizorroza, was historic in its own way.

A year ago, things were about to get significantly worse than they are right now. But please do not mistake this analysis as some kind of cheerleader support on behalf of Julen Lopetegui. Real Madrid are ill but not because of him and not because this is a sudden sickness. There are temporary, inflammatory causes.

Anyone who argues that Isco and Dani Carvajal (indeed, Marcelo for all his many flaws) are not utterly vital to the way this team has been constructed knows nothing about football, hasn’t been paying any attention or is working from a personal agenda.

Carvajal, among many laudable skills, is a brutal competitor. Even beyond his pace and tackling, he oozes Sergio Ramos-esque aggression and will to win. Believe me when I say how important that is in elite modern football, as vast wages soften people’s hunger for victory when coasting is almost equally well-paid.

Without Carvajal, Madrid are a far softer touch. Ditto Marcelo. The Brazil international has started this season out of shape and defensively more self-indulgent than usual. But while this side struggles to score, his either being off-form or absent is a major debilitating factor.

Then there’s Isco: “Mr. Solutions.” He is already a significantly more skilled player than Luka Modric, and given that he’s younger, beats opposing players more easily, scores more and makes more goal chances, how important to Madrid do you reckon he is if he’s better than “The Best?”

By far the most vital factor, though, is Zinedine Zidane’s absence. And not necessarily Zidane the coach. If, by some utter miracle, the Frenchman were to be tempted into returning and replacing Lopetegui, the key problems wouldn’t change. That’s precisely what he warned Florentino Perez and Madrid’s staff of when he dramatically left in May.

Madrid’s football philosophy isn’t developed or codified. There’s no holy book to rely on beyond: “Find the best, most marketable player in the world, and buy him.”

It begs the question: What’s the tactic if he — for this moment: read Neymar — isn’t available for purchase?

Across Zidane’s recent years at the Bernabeu, his magic enabled the football division to fly by the seat of its pants. Perez is convinced that Madrid can be run on his wisdom and excellence. Perhaps, in a business sense, he’s right, but when it comes to Zidane’s various roles — Football Director, assistant coach, youth coach, transfer market guru and, finally, head coach — the Frenchman brought precisely the elements that the Perez fiefdom lacks.

Zidane saw Isco and Raphael Varane for what they were: essential purchases. In the case of the latter, he persuaded Madrid’s President against his will, and in Varane’s instance, he persuaded the player not to join Manchester United.

It was also Zidane who kept Karim Benzema on the straight and narrow during his torrid times away from the pitch and then re-educated the striker about diet and keeping to his fighting weight. Zidane must be credited for creating and then maintaining the best-ever working atmosphere at Valdebebas training ground.

Practice sessions were tailor-made for the specifics of this current squad: technically interesting, fun and competitive, with work based around honing skills they loved to practice. (Take shooting, for example, and look how rarely Madrid hit the target from range since Zizou left and training priorities changed.)

That life at Valdebebas wasn’t massively oriented around tactics didn’t trouble Los Blancos very much. Which group of top players, as a rule, don’t react positively to this general message: “You are a group of wonderful talents, we’ll simply go out, and we’ll outplay the opposition with invention, technique, experience and skill over tactics”?

Zidane took a squad that was replete, with full stomach and belt straining, then injected it with energy, enjoyment, ambition and hunger. Replete in terms of ambitions, wages, reputation and trophies.

What he achieved, in terms of managing upward (President Perez), inspiring his squad, guiding some of the transfer policy and ensuring that his players were mentally ready when the business end of the season came around wasn’t simply exceptional. It also swam against the tide in terms of how this club is headed.

Zidane, while coach and no longer so influential on transfer market policy, disagreed with Florentino Perez’s obsession with signing a big-name keeper. He intuited, as can be seen by how much confidence he showed in them when it came to teamsheets, that the Presidential plan to invest in promising Spanish youth — Theo Hernandez, Dani Ceballos, Martin Odegaard, Vinicius Jr., Rodrygo, Andriy Lunin, Borja Mayoral, Marco Llorente, Jesus Vallejo, Alvaro Odriozola, Mariano Diaz, etc. — flew directly in the face of the same Perez-driven demand that Madrid win the title and remain a top-two or -three side in the Champions League. These demands are contradictory.

Lopetegui might or might not prove to be the right coach for a Real Madrid that is still bereft of a fully modern Director of Football role, has a squad full of superstars who are 30 years old or older and as an institution is one of the most complicated sports outfits when it comes to holding a position of power.

He wouldn’t be the first, or the last, to suffer the “right place, wrong time” disease. But it has become Perez’s committed dream, as he expressed during the media presentation for Lunin and also for Vinicius, that Madrid curb their financial outlay and invest in youth.

After blaming the changing transfer market, his phrasing was deliberate. “Little by little, we are establishing the new foundations of our team’s present and future. To our existing great squad, we want to incorporate the young but indisputable talent that will dominate football in the coming years, players who have already shown capacity and who aspire to the maximum while wearing our shirt.”

It’s laudable, and I hope it bears fruit, but frankly, it’s also so that Madrid can afford Neymar if he comes on the market.

Zidane didn’t want to commit to tiring, stormy or threatening seasons when the squad was reinforced with “potential,” when the existing stars fell into a comfort zone regarding their places in the starting XI. Given his trophy success with junior Spain international sides, is there automatically a better coach than Lopetegui to oversee the gradual incorporation of young (mostly Spanish) talents? It’s at least dubious.

This isn’t the time for Madrid to sack the coach. You’re witnessing the traditional creaking of a machine in need of disassembling and rebuilding, all of it at Perez’s behest. That takes time and can be painful; there is no Zidane to add his personal magic, and it requires the kind of expertise Perez doesn’t possess. Thus, at least until season’s end, he should stick with Lopetegui, the man he chose to cope with the results of his policy.