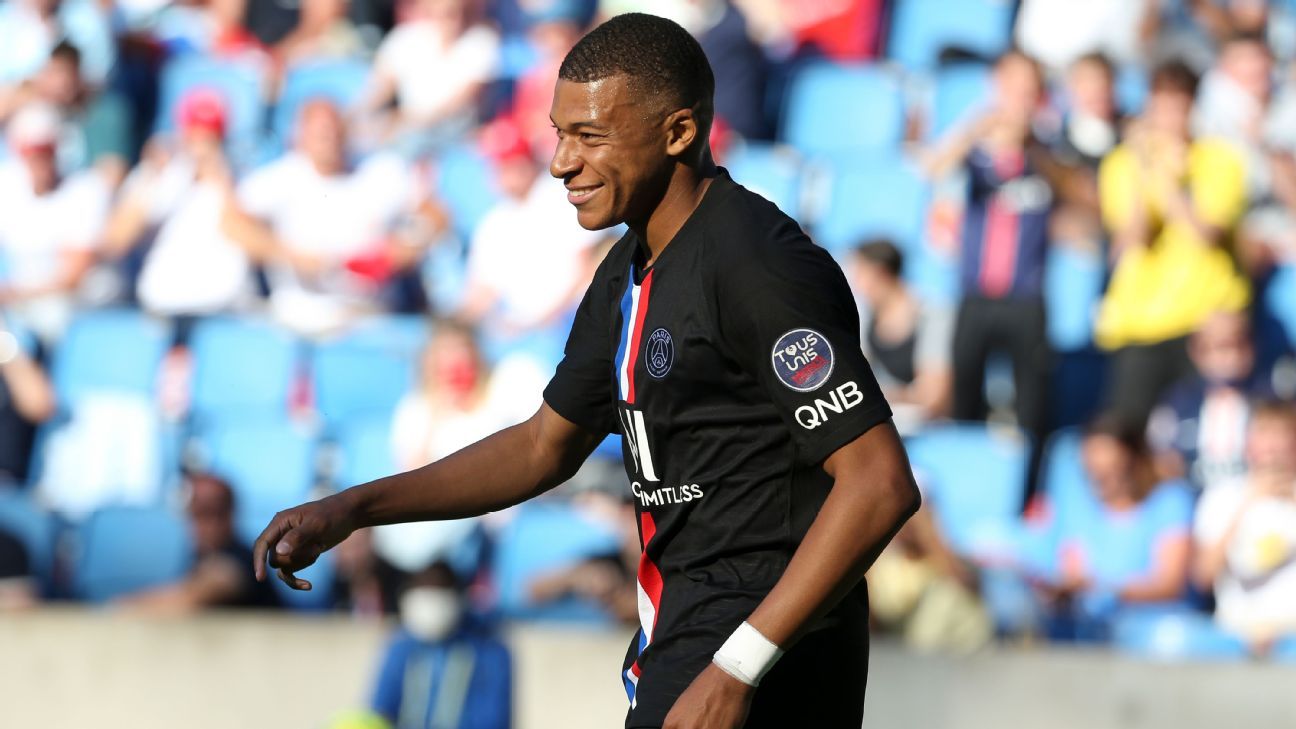 
The coronavirus pandemic has made the transfer market uncertain — you can find out when the windows close here — but here are the rumours floating around Europe’s big leagues and beyond. Plus, check out all the latest major completed transfers across Europe.

Jurgen Klopp’s team are reportedly in regular contact with the World Cup winner, and Real Madrid are looking to make a move of their own.

The Frenchman will have one year left on his contract with PSG by the time the season ends, which is something both clubs will aim to take advantage of as the French giants look to avoid losing him for free.

Mbappe has revealed his admiration for Liverpool in the past and has referred to Real as a “dream” move. But even amid the COVID-19 pandemic, he would still command a fee that would rival Neymar‘s world record of €222m.

11.00 BST: Luis Suarez is furious with Barcelona after the club backtracked on an agreement to let him leave for free when it emerged he was close to signing for Atletico Madrid, sources have told ESPN’s Sam Marsden and Moises Llorens.

Suarez is now considering holding a news conference alongside his lawyers if the situation cannot be resolved to give his version of events. He believes a verbal agreement reached with Barca this week to terminate his contract should be honoured.

After being told he could leave the club by new coach Ronald Koeman last month, the striker’s legal team had been negotiating the recision of their client’s deal with Barca.

10.40 BST: Villarreal have confirmed the signing of 20-year-old centre-back Jorge Cuenca from Barcelona B.

Barcelona continue to frantically sell players as they look to raise money to allow Ronald Koeman to remodel the squad before the transfer window closes next month.

The latest player to leave the club is Spain U21 defender Cuenca, who joins Villarreal for an initial €2.5m, with an additional €4m due in possible add-ons. Barca have a buyback option on the centre-back, who’s made one first-team appearance, and will also be due 20% of any future sale.

10.20 BST: UPDATE from Paper Talk: Barcelona have approached Ajax to ask how much they want for USMNT right-back Sergino Dest, while Bayern Munich are still in discussions as the two clubs try to find a compromise over a transfer fee, sources have told ESPN’s Tom Hamilton.

The chase is heating up for the 19-year-old, with both European giants keen on bolstering their defence with the young full-back.

Bayern were leading the race late last week and were the only club to make a direct approach, as they seek to add depth to their defence.

Barca have been long-standing admirers of Dest, though any interest was dependent on them selling players. Now, with Nelson Semedo closing in on a €40m move to Wolves, Barcelona are looking for a new right-back with Dest and Norwich’s Max Aarons on their radar.

Dest is understood to be Barca manager Ronald Koeman’s preferred option but Aarons has been a long-term target and sources close to the 20-year-old said Barca began sounding him out about a move in May. They have since had a loan bid turned down.

Barcelona’s season starts on Sunday and the club currently only have Sergi Roberto as an option at right-back so will look to sign a player quickly this week once the money comes in from Semedo’s move.

10.01 BST: Arturo Vidal has completed a €1m transfer from Barcelona to Inter Milan.

09.41 BST: Fulham are closing in on the signing of central defender Marlon from Sassuolo, sources have told ESPN’s Tom Hamilton.

Scott Parker’s Fulham have shipped seven goals in their first two Premier League matches and have moved quickly to bolster their defence. Marlon, 25, joined Sassuolo in 2018 from Barcaelona and has caught the eye of the newly promoted Premier League side with a fee in the region of £13m agreed, sources have told ESPN.

Marlon was left out of Sassuolo’s starting line-up for their opening round match against Cagliari. When Barcelona sold Marlon in 2018 they confirmed they would get 50% of any future sale and also had a buy back clause.

09.22 BST: Edinson Cavani has been linked with Real Madrid. Could it work?

08.59 BST: Atletico Madrid striker Alvaro Morata has arrived in Turin ahead of his proposed return to Juventus on loan, the Italian champions revealed on social media last night.

Morata, 27, joined Juve from Real Madrid in 2014 before returning to them two years later having won two Serie A titles.

Marca reports that Juve will pay Atletico a €10m fee to loan the Spain international for the season, and he is set to be unveiled on Wednesday.

08.28 BST: Borussia Dortmund have reiterated their stance that of winger and Manchester United target Jadon Sancho will remain at the club for the coming season.

“Jadon is here, and he will stay here,” Borussia Dortmund squad manager Sebastian Kehl said at an event organised by local Dortmund paper Ruhr Nachrichten on Monday. “That’s an important signal from the club because we have a certain responsibility. Without Jadon this team is not as good.”

With the transfer window closing in less than two weeks, and England international Sancho not indicating he could force a move to Manchester United, 20-year-old looks set for another season at the Westfalenstadion.

Sancho has already made two appearances for Dortmund this season, scoring the opener in a 5-0 DFB Pokal win at Duisburg on Sept. 14 before assisting one of Erling Haaland’s two goals in Saturday’s 3-0 Bundesliga win over Borussia Monchengladbach (stream the replay on ESPN+ in the U.S.).

08.00 BST: Atletico Madrid are near completion of the signing of Luis Suarez after the striker edged closer to terminating his contract with Barcelona, various sources have confirmed to ESPN’s Sam Marsden and Rodrigo Faez.

The talks between the two La Liga sides comes as Alvaro Morata prepares a return to Juventus from Atletico on a loan with an option to buy. The Spanish playmaker arrived in Turin, where he played from 2014-16, on Monday ahead of an official announcement.

Suarez, 33, has one more year to run on the terms he signed with Barca in 2016 but was told by new coach Ronald Koeman last month that he was not part of his plans. Koeman did not call him up for any of Barca’s friendlies in preseason but said he would look to reintegrate him into the squad if he ended up staying.

Archie Rhind-Tutt has the latest on Bayern Munich’s transfer targets, saying Ajax’s Sergino Dest will be on his way.

PAPER TALK (by Danny Lewis): Bayern closing in on Dest

Barcelona have been strongly linked with Sergino Dest, but Bayern Munich are closing in on a move for the Ajax full-back, reports AD.

The Netherlands giants originally turned down an approach from Bavaria, but Bayern have come in with another one, which is closer to the €20m Ajax had been looking to bring in for the USMNT player.

The 19-year-old turned down a new contract with Ajax. He looks to follow Hakim Ziyech and Donny van de Beek out of the door after they joined Chelsea and Manchester United, respectively.

The report has gone as far as to suggest that a move to Bayern seems imminent.

Atletico to meet with Cavani’s representatives

Atletico Madrid are getting closer to a deal for Barcelona frontman Luis Suarez, but they are not stopping there, reports L’Equipe.

The French outlet has suggested that the La Liga side are set to meet with his compatriot Edinson Cavani‘s representatives to discuss a move for the former PSG striker.

The Uruguayan’s contract with the Ligue 1 champions came to an end after last season, and there have been numerous links regarding his future since then.

It appears he might be about to finally settle on a new home, playing alongside a familiar face in Suarez.

— AS Monaco have made a €15m offer for Sporting CP midfielder Wendel, according to Record. There is a dispute about the price, though, with the Ligue 1 outfit not wanting to budge any higher while Sporting are holding out for €25m.

— Roma are adamant that they want to sign Manchester United defender Chris Smalling but don’t want to pay over the odds, according to Calciomercato. The Red Devils are said to be demanding €20m for the Englishman, while Roma have offered €13m.

— Internazionale teenager Lucien Agoume is close to joining Spezia on loan, reports Foot Mercato. The 17-year-old has attracted short-term offers from the likes of Crotone, Parma and Hellas Verona, as well as Bundesliga outfits Schalke and Borussia Monchengladbach.