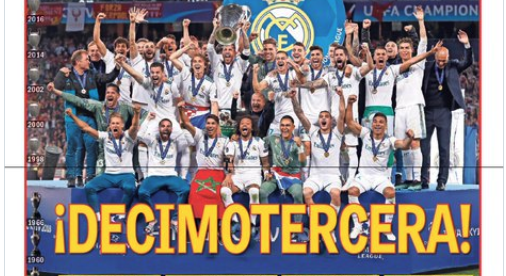 The local media reaction on the morning after Real Madrid’s Champions League final victory over Liverpool struggled to explain a night packed with unexpected drama and startling storylines, but with a very familiar ending: yet another European Cup for the Bernabeu outfit.

“The thirteenth!” said the front page of AS, along with “two huge bombs from Bale, and another from Cristiano — the first decided the game, and the second threatened to leave.”

“Eternal champion,” said the match report inside. “That has been Madrid, since they first set foot in Europe, 62 years ago. That pioneer which has changed the music, but kept the lyrics the same – a team which overcomes adversity, suffers in hard times (the first half an hour) but relentless when it matters. A team which keeps ice cool in difficult moments, having learned to win by winning. Their latest title, the 13th, came adorned by a bicycle kick for the ages from Bale. The Welshman ran from the bench to eternity at the speed of sound.”

Marca’s cover said ‘Unbeatable – Madrid are European champions for a 13th time’, while also adding ‘Cristiano sows doubt [by saying] it has been very nice playing for Madrid’.

“If football is only a sport, then music is just noise, and the heart is just an organ,” said Marca’s report. “But we all know that is not the case. Because football has soul, musical is a celestial mix of sounds, and the heart simply moves the world. If Real Madrid is just a football team, then the European Cup is just one more trophy for its cabinet. But we all know it is not like that. Because Real Madrid are not just one more team. Madrid won in its favourite competition, nothing new, but something old, eternal, everlasting. They did it suffering, resisting, holding on against Liverpool, but with the capacity to send a star up into the sky, in this case Bale, who wrote himself into the team who wins the Champions like with a bicycle kick.”

“Europe laid down once again before the victorious and unique Real Madrid. An infinite Madrid for whom time does not pass. A club which walks to pick up the European Cup in its slippers. An enchanted team who is just as capable in this tournament in good times as in bad. Who secured their 13th ‘Big Ears’ with a goal for posterity from Bale, along with two similar howlers from the rival goalkeeper. So in Kiev they won their third consecutive Cup, something only within reach of Di Stefano’s Madrid, Cruyff’s Ajax and Beckenbauer’s Bayern. It could have been Ronaldo’s Madrid, but the Portuguese tarnished the celebrations with an out of place tantrum. Blank in the final, CR decided to suggest he was leaving the club. His ego in the clouds yet again.”

El Mundo – ‘Madrid, the champion of the 13 heartbeats’

“To write match reports about Madrid is one of the best, and the worst, jobs. On one hand, it allows you to become a writer of the kings of football, leaders of an empire which denies the destiny of all empires – decline. On the other hand, it frustrates you as all arguments are reduced to nothing, and reason is laughed at. The conclusion is the same as Neruda on love – Madrid are not understood by looking, Madrid are understood by feeling, in Kiev just like in Cardiff, in Lisbon just as in Amsterdam, cities where they have left their mark, whether through their own artist’s touch, or the misfortune of others. The heart has reasons which the head cannot understand, and that is the only way to understand this Madrid of the 13 Champions Leagues, the champion of the 13 heartbeats.”

ABC – ‘Madrid lift the 13th, with some help from Karius’

“Madrid secured their 13th Champions League, with a hegemony unknown in Europe since the 1970s. They now have more European Cups than all of England. We could explain Cruyff’s Ajax, Beckenbauer’s Madrid, and Sacchi’s Milan. But this Madrid is impossible to explain. Madrid are a mix of the Harlem Globetrotters and Disney with a secret which seems more like the Coca Cola recipe than a philosophy of play. The game had two injuries, a bicycle kick, and two howlers. A renaissance and a sporting death. It was an extravagant final, as it could only be with a cocktail made of Klopp’s energy, Zidane’s fortune and Madrid’s leading men.”