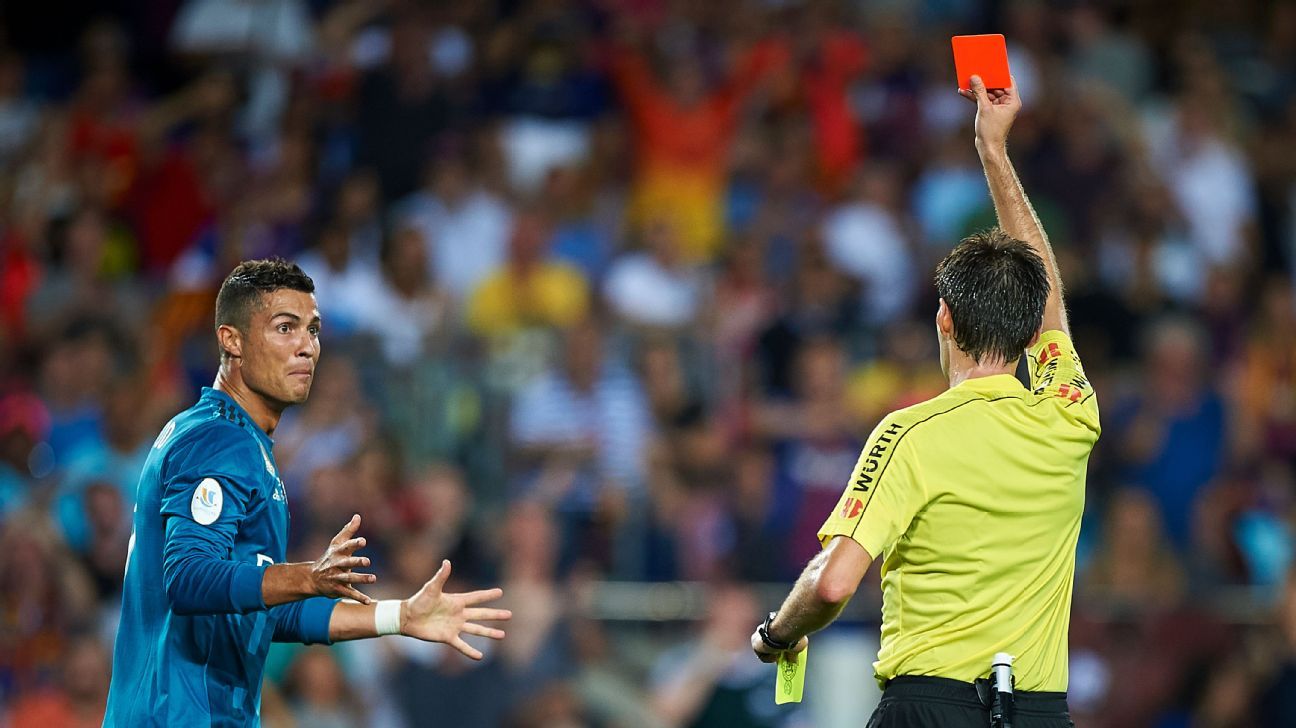 
Real Madrid supporters are planning a white-handkerchief protest for Wednesday’s Spanish Super Cup second leg at home to Barcelona after Cristiano Ronaldo was hit with a five-match suspension.

Although the planned “panolada” protest comes in response to the decision to give Madrid forward Ronaldo an extended ban for pushing the referee after he was shown a second yellow card in the first leg, the president of the official Madrid fan group Pena Capote y Montera said that the ruling marked a trend that has seen the European champions suffer unduly at the hands of officials in recent years.

The group plans to display a banner at the Bernabeu to highlight the feeling that Madrid have been harmed by “scandalous” officiating, with the protest timed for when Jose Maria Sanchez Martinez, 33, enters the pitch ahead of what will be the Murcian referee’s first Clasico.

Pena Capote y Montera — named after a bullfighter’s cape and hat — issued a call to fans on Twitter, reading: “Take out your hankie when the three officials come out, in a signal of protest for the refereeing which Real Madrid is suffering and in condemnation of the unfair punishment for our player Cristiano Ronaldo.

The group’s president, Nabil Alturek, told radio show “El Larguero” that he had not spoken about the protest with club officials but other fan groups had said they would join in.

“They all said we should go ahead with it, that they were with us,” Alturek said. “We will see what happens, but it has a big media impact already. We have made a banner to show when the referees come out onto the pitch, and not just that but also packets of Kleenex, which we will be handing out.”

Ronaldo was shown a second yellow card late on in Madrid’s 3-1 win at the Camp Nou after referee Ricardo De Burgos Bengoetxea ruled he had dived to try to win a penalty. The Portugal captain reacted by pushing the Basque official, earning an extra four-game suspension on top of the mandatory one-match ban for the sending off in a ruling from the Spanish federation’s presiding judge on Monday.

Although the Spanish federation’s disciplinary code is clear in saying that the punishment for even a slight push on a match official warrants a ban of between four and 12 matches, Madrid coach Zinedine Zidane told Tuesday’s prematch news conference that he was “upset” with a suspension he considered “a lot when very little happened.”

Meanwhile, some Madrid fans and pundits have suggested Ronaldo’s second booking was unjust, particularly in light of the contentious penalty awarded in favour of Barcelona striker Luis Suarez in the same game.

Alturek said: “It is not just about Cristiano but all the refereeing we have been suffering recently, and the [favourable treatment] Barca have been getting.

“It is a scandal, a real scandal. And then there is the ban for Cristiano, which seems to us completely over the top.”

Some pro-Madrid media outlets such as OK Diario have fed anger among fans by talking about “shameful” pro-Barca refereeing in recent years, highlighting facts such as the 14 red cards issued to Madrid players and only two for Barca in the last 29 Clasicos.