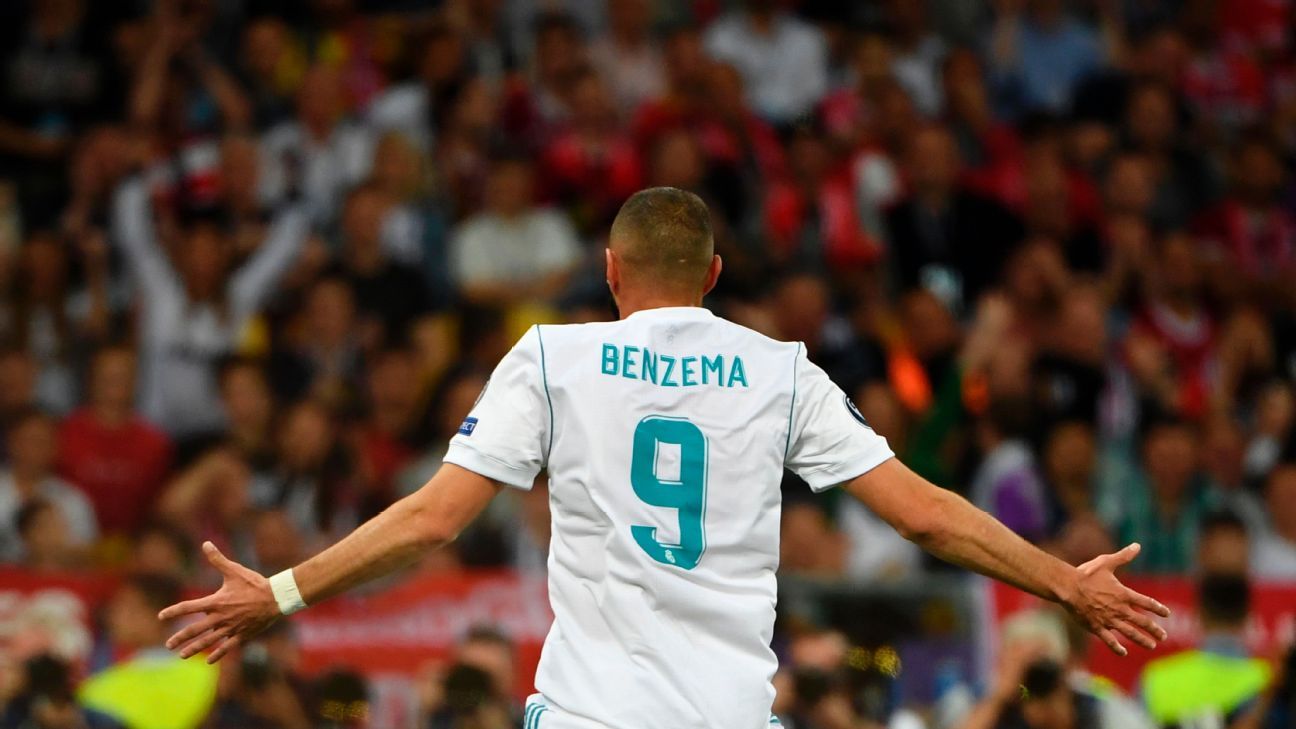 
Three minutes isn’t a very long time in football, as Karim Benzema can attest. That was how long it took during a home game last season for the Bernabeu to leap on the Frenchman’s back, his heavy touch eliciting a cacophony of jeers from the stands. For Benzema it was nothing new; it’s been the soundtrack to his Real Madrid career.

In Spanish football’s most exacting arena, the Madrid No. 9 has never won the crowd despite posting a higher goals-per-game ratio than Raul. The shirt weighs heavily on Benzema, who has admitted he should score more. But since his arrival at the Bernabeu in 2009, that has not been his primary task. Few attacking partnerships since the turn of the century have been as productive as the Benzema-Cristiano Ronaldo tandem, but while the Portuguese has reaped the records and the awards, the other has gone largely unnoticed.

Benzema is not, as his first manager at Real, Manuel Pellegrini, noted, a goal scorer: “He is a mixture of a creative player and one who operates on the edge of the area.” Or a No. 9 1/2, which is the number it has often been suggested Benzema should wear for those unsure of his job description.

Replacing Ronaldo’s strike rate is a thankless task and one that was earmarked for Gareth Bale. But it was Benzema who came out of the blocks firing, netting four in three games as Real strolled to wins over Getafe, Girona and Leganes. The weight of responsibility then took its toll, Benzema’s number proving a psychological millstone around his neck. Six games passed without a shot on target as Real slumped to a nadir not witnessed since before he was born.

The apple of Florentino Perez’s eye, Benzema did not help his case when he said: “If I’m starting, there’s no reason to go anywhere else.”

Madrid fans disagree. A recent poll by sports daily AS landed overwhelmingly in favour of striker Mariano being handed the reins. Another asking if Perez should reach for his cheque book in January to sign Chelsea’s Eden Hazard, rather than waiting until next summer, was backed by 85 percent of respondents. The Real honcho is under pressure to take the hit sooner rather than later.

Perez may be bulletproof but he cannot avoid a level of responsibility for Real’s current plight; Benzema hasn’t faced serious competition since the departure of Gonzalo Higuain in 2013. El Pipita has gone on to hit 115 goals in Serie A while Benzema has managed 76 as Real’s starting striker, the high-water mark coming in 2015-16 when he knocked in a career-high 24 in the league.

Since then Benzema has scored 20 Liga goals. He managed just five domestically last season, and while his record in Europe is often overlooked — a double against Bayern in the semifinal return leg and the opener in the final proving vital to Real’s third consecutive Champions League triumph last season — the consensus is that he is not the answer to redressing a total of two Liga titles in 10 years.

The fault does not lie with Benzema: Perez’s refusal to stump up in the market while he eyes his name adorning the remodelled Bernabeu is a key factor. The squad has been left to stagnate, cut-price solutions to a €117 million question left terminally unanswered. Benzema was half of a double act; he cannot be expected to carry the can alone.

Real’s rot seeps further than a dilapidated stadium. Atletico have neatly made the step towards modernity while Perez continues to flounder as though the recession never happened. “We’ll wait until he costs €60m,” is a quote that should come back to bite the de facto life president with his club knee-deep in Kaka.

Madrid fans, stumping up their fees every year, are left questioning why their scouting department failed to pick up on players like Krzysztof Piatek or Timo Werner, instead indulging buy-back policies that consistently fail to bear fruit.

Benzema is likely to miss Real’s next two games against Levante and Plzen, scarcely the toughest opponents fate could have provided. If Mariano is not afforded the chance to answer a question nobody seems willing to ask, El Presi should duck. Both are home games, and the Bernabeu will not be in charitable mood.

Hazard is being pushed by the pro-Madrid media as a January signing, but Chelsea will not be easily persuaded to part with their star player, although as Alvaro Morata noted: “If Madrid come in for him, there would be nothing blocking him.” Perez has done too little for far too long, and somebody is going to pay the price.

Negative results against modest opposition will certainly be the curtain call for Julen Lopetegui if the Clasico goes Barcelona’s way. Failure to address the cracks covered by Ronaldo and Zinedine Zidane over the past three seasons will have Madrid fans rightly calling for Perez’s head as well.

This time, as when he stepped down in 2006, Perez has no case for the defence. For his part, Benzema has until January to prove that his president’s unwavering faith is better-placed than his shooting.