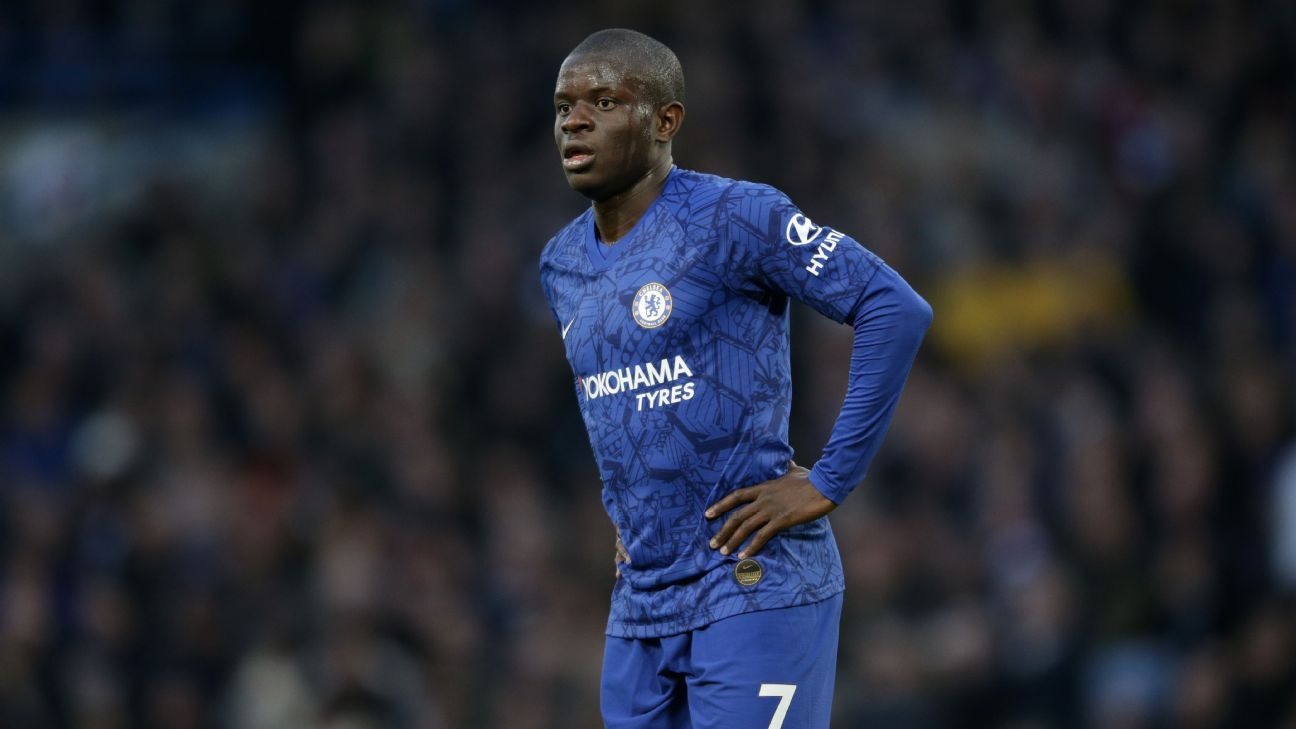 Real Madrid have a history of spending big money on attacking talent, but arguably their best business in recent years has been in the defensive midfield area. Claude Makelele set the tone in 2000 and now Casemiro is carrying on the tradition. But are Real about to splash €80 million on Chelsea‘s N’Golo Kante?

AS reports that Chelsea need to sell players in order to fund their moves for RB Leipzig striker Timo Werner and Ajax’s Hakim Ziyech — as well as a possible deal for Bayer Leverkusen star Kai Havertz. Sources told ESPN last month that Kante was not going to be allowed to depart, but Real seem ready to test that resolve with an €80m bid for the Frenchman.

Rennes’ teenager Eduardo Camavinga is also of interest to Real, but Kante is a player who could slot in and improve the team immediately. Juventus and PSG are also reported to be on the 29-year-old’s trail if the Blues are willing to sell.

11.48 BST: The Daily Express claims that Norway midfielder Mathias Normann is of interest to Manchester United.

Norman, 24, plays for Russian side Rostov and has been valued at around £15m. The defensive midfielder has also been linked to Valencia and Tottenham but with Norwegian Ole Gunnar Solskjaer at the Old Trafford hotseat, a move to Manchester would be appealing.

11.11 BST: Bayern Munich could win the Bundesliga title today if Dortmund lose and they win, but the club are are prioritising the signing of Man City winger Leroy Sane and a right-back this summer, says the Athletic.

Bayern were close to signing the 24-year-old Sane last summer before his knee injury and now a €100m deal looks like it could cost as little as €60m.

There is some work to do on the deal though as the report states: “Bayern are supposedly willing to pay just €40m so City are insisting they would rather run down his contract and lose him on a free next summer.”

Steve Nicol rejects suggestions that Jurgen Klopp could manage Bayern Munich in the near future.

– Barcelona are set to complete the signing of young Rayo Vallecano forward Fabian Luzzi after flexing their financial muscles to beat Real Madrid and Atletico Madrid.

– Manchester United have watched Ansu Fati‘s progression into the Barcelona first team, but there is an acceptance he will remain with the Spanish giants despite rumours of a £100m bid.

– Release clauses are supposed to simplify transfers, but Chelsea have still had to negotiate with RB Leipzig over their imminent purchase of Timo Werner.

– David Silva is considering a move to Major League Soccer when he leaves Manchester City at the end of this season.

Ramsey, 29, only joined last summer on a free transfer but the Italian club are looking to save his reported £400,000-a-week wages and Manchester United are interested in bringing him back to the Premier League.

Cherki, 16, signed his first professional contract at Lyon in July 2019 but not before plenty of clubs had shown an interest in the talented winger.

“He’s undoubtedly a player who will go to the highest level,” Aulas told Telefoot. “That’s why we did everything we could to sign him. The two clubs that were interested when we won his faith were Real Madrid and Manchester United.

“We want him to succeed with Lyon. We want to support him and that’s why we’re trying to move his career on. In years to come, we want him to become not only a leader for our attack, but a leader from the academy.”

The Evening Standard is reporting that Ben Chilwell‘s eagerness to leave Leicester City for Chelsea this summer could speed up the process of getting a deal over the finish line.

The Foxes were initially hoping that they could hold out for a fee close to £80m, but due to a combination of Chilwell showing a real desire to leave and the current financial market due to COVID-19, it appears as if a fee of around £50m is going to be more realistic.

Leicester had already resigned themselves to the idea of the defender heading to Stamford Bridge, but at this stage, it really does seem like an inevitability.

Rivals Manchester City’s priority in the next transfer window remains bringing a new centre-back to the Etihad Stadium despite monitoring Chelsea’s pursuit of Chilwell, sources have told ESPN.

The England international has transformed into one of the best players in world football during his tenure in the Bundesliga, but now, it appears as if the momentum is swinging back in the direction of him returning to the Premier League.

United have been tracking the 20-year-old’s progress for months on end with the intention of putting in an offer, but the Reds are reportedly ahead of the curve as the summer transfer window beckons, though his €100m price tag may see them rethink their strategy.

Barcelona are willing to pay a portion of Philippe Coutinho‘s wages in order to sell the Brazil star, The Telegraph reports.

The former Liverpool frontman has been unable to make anything close to the kind of impression that many were expecting when he moved to Camp Nou two years ago, and, as such, a €60m return to the Premier League has been on the cards for months.

There’s a chance he’ll stay with Bayern Munich following his loan spell with the German giants, but either way, Barca have recognised that his wages of over £200,000-a-week will not be feasible in the current climate — even for Europe’s biggest clubs.

– The Mirror is reporting that Leicester are interested in trying to sign Southampton defender Jannik Vestergaard this summer. Back in January, they were contemplating a bid of around £26m. In the present day, they’re happy to lower that total as Vestergaard has started just once in the league since January — in addition to the fact that he has entered the final two years of his contract.

– Wolverhampton Wanderers are now in the running to try and sign Reims defender Axel Disasi, Daily Mail reports. The 22-year-old, who has just one year remaining on his contract, is valued at £13m. However, Nuno Espirito Santo’s men have a tussle on their hands with fellow top flight clubs Southampton, Tottenham Hotspur and Arsenal all showing interest.