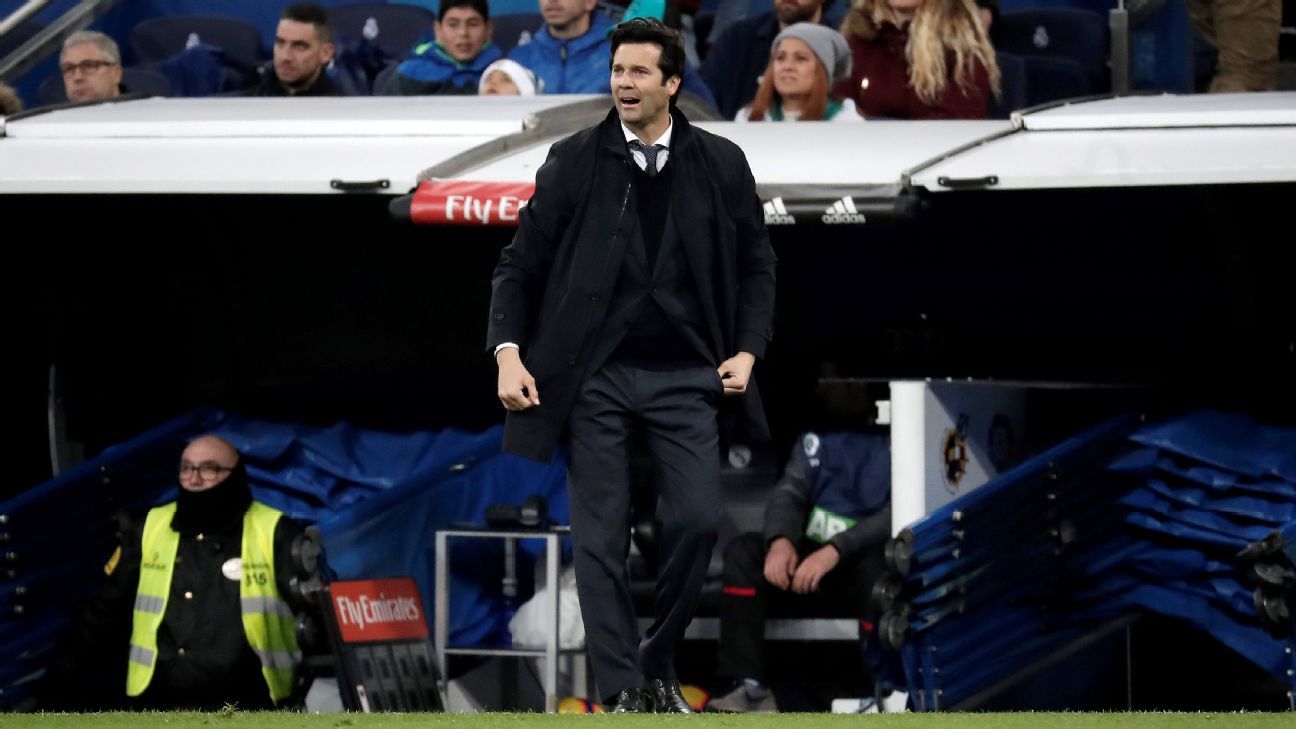 
Real Madrid coach Santi Solari proclaimed himself very satisfied with his team’s performance and form despite whistles from a frustrated Bernabeu crowd and anger from local media after Saturday’s uninspiring 1-0 La Liga win at home to Rayo Vallecano.

Karim Benzema’s well-taken early strike was enough for the three points versus a Rayo team struggling against relegation, with Madrid having just four shots on target all game, and Blancos goalkeeper Thibaut Courtois making a double save in added time to ensure the victory.

With his side having moved to within two points of La Liga leaders Barcelona, albeit with one more game played, Solari claimed at the postmatch news conference that he had seen a satisfactory performance from his team.

“I am very satisfied,” Solari said. “We played a very good first half, moved the ball well and created many chances. We should have had a bigger lead at the break.

“But football is like that, if you are not decisive, then you can suffer at the end. It is normal that this happens. If we had scored a second it would have been very different.”

Twenty-four goals in their first 16 La Liga games is Madrid’s lowest total since 1993, and Benzema with just six is their top scorer. But Solari said he did not think the team had a problem in front of goal.

“We will try and score more goals,” he said. “Today we had many more chances than at Huesca [another 1-0 win last week] when we made a big sacrifice to be together in defence. Today with our good play we kept the ball and made lots of chances. We should have had a bigger result, and the next day those chances will go in.”

With local reporters disputing Solari’s impressions of the game, the mood in the press room got increasingly tense. And the Argentine was asked why, if their team were supposed to be in such great form, the Bernabeu fans had whistled at the end, as they did after Wednesday’s 0-3 UCL home defeat to CSKA Moscow.

“I was delighted with the support of the fans through the whole game,” Solari replied. “Then there was that last chance, and that is football. We have won our Champions League group, made the next round of the Copa del Rey, and have cut the gap at the top of La Liga.”

While giving no details on any injury matters, Solari admitted recovery time was tight with the team flying to Abu Dhabi on Sunday ahead of Wednesday’s Club World Cup semi-final against Japan’s Kashima Antlers.

“I think [Karim] just got a bang, and Marco too,” Solari said. “I don’t think it is more than that. We will see tomorrow, although the plane is tomorrow, so we don’t have much time.”

Patrick Vieira can underline Arsenal’s decline and need for change when he takes Palace to the Emirates
Barcelona haven’t given up on Erling Haaland move next summer
I disagree with Sir Alex Ferguson
United States vs. Costa Rica – Football Match Report – October 13, 2021
Newcastle owners must forget star signings