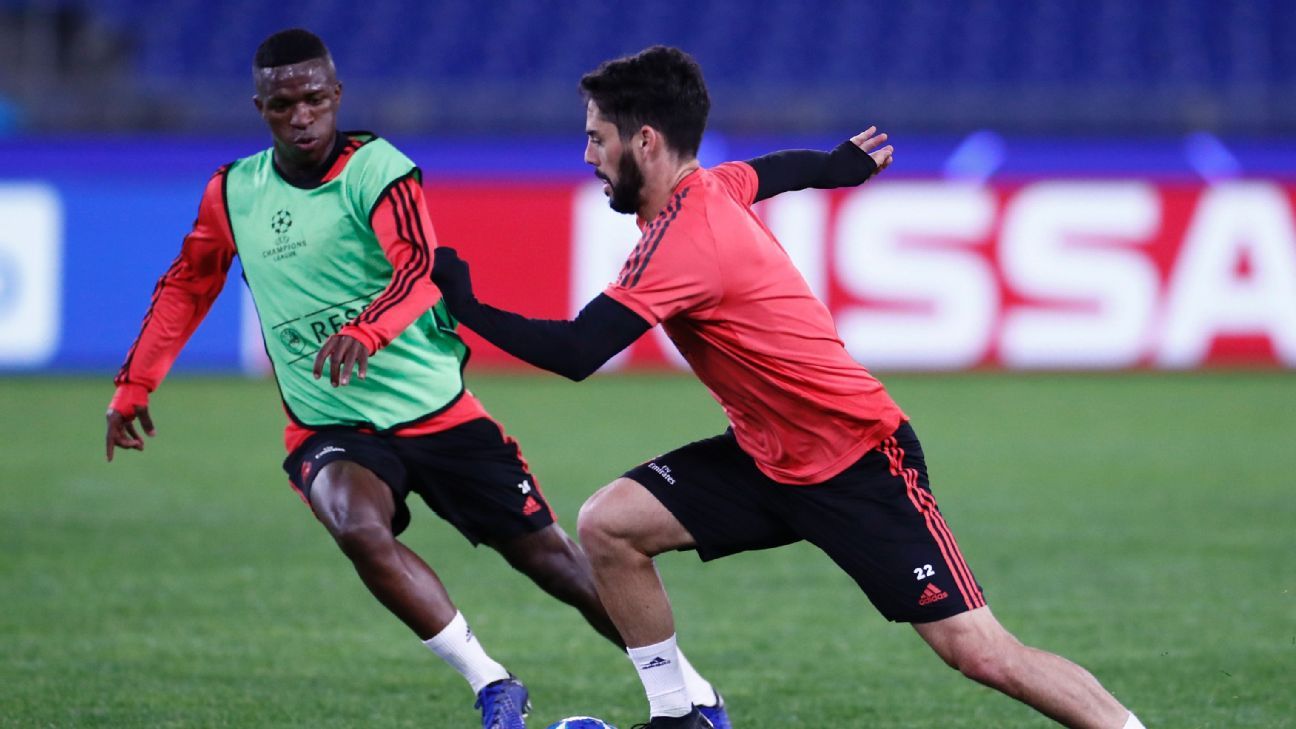 
Real Madrid coach Santi Solari said Isco’s absence from the club’s bench in Tuesday’s 2-0 win at Roma in Champions League action was nothing more than a “sporting decision.”

“These are calls that you make in a certain moment,” Solari said of Isco, who was fit and available for selection. “We are here to do that, nothing else. It was a sporting decision, nothing else. There are no starters, or substitutes, in football. It is up to all players to be at 100 percent, so the coaches pick them.”

Solari told the post-game news conference that his team had put in a serious performance which should lift the gloom that settled after Saturday’s embarrassing 3-0 defeat at Eibar in La Liga action.

“We worked very hard in the game,” he said. “Games last 90 minutes and sometimes you need to have patience. Today we put in a very serious performance, all the players showed responsibility. It was important to lift ourselves up quickly. We are happy. It is true they had a chance at the end of the first half, which can change games, from our own mistake. But we were better and more precise in the second half.”

Solari said he was happy with his surprise decision to give Marcos Llorente, 23, a first Champions League start in holding midfield after just 11 minutes of domestic play until Tuesday this season.

“We are here to take decisions, sometimes you get it right, sometimes not,” he said. “Always easier to talk after the game, but we must do it before. I am very happy for how he played, he is an example as a professional with a lot of discipline, works very well, and played a spectacular game today. He trains very well everyday, which is why he can play like this.”

Madrid goalscorer Gareth Bale said that he hoped clinching qualification for the Champions League last 16 as group winners would help calm what has been a “turbulent” first four months of the season at the club.

With neither team at their best in Madrid’s win at Estadio Olimpico, the visitors should really have gone behind but for Cengiz Under’s shocking miss just before the break. Bale then capitalised on a Federico Fazio error to coolly make it 1-0 just after half-time, and Lucas Vazquez soon doubled the lead by finishing off a sweeping team move from close range to seal the victory.

The Wales international told Viasport  afterwards that there had been frustration in the Madrid dressing room at half-time, with Solari stressing the need to just keep playing their natural game.

“We were obviously a little frustrated at half-time,” Bale said. “We have been in that situation many times, we know that even if we have a bad first 45 we need to keep going as the game lasts 90. The manager told us at half-time we needed to keep playing the way we know. And in the second half we played very well, played ball like we normally do. We got some confidence back and need to build on that now.”

Bale admitted that he himself had not been at his best during the first half, but said that he had kept working hard and hoping for a break which came with the opening goal.

“That is football, it can be frustrating sometimes when things are not quite coming off,” he said. “I know from experience you just have to keep working hard, together as a team, and we did that today. I closed the keeper down and he made not a great clearance. I stood there waiting, hoping I’d get a bit of luck. Luckily enough it came off for me, and I could get the first goal, which was crucial for us.”

Bale accepted that Madrid’s season so far had not gone to plan — with the team on their second coach of the campaign and sitting sixth in the La Liga table.

“The main objective [in the UCL] was to get through the group, that is sorted now, and we need to keep improving, keep winning games,” he said. “It has been a bit of a turbulent start to the season. We have to keep fighting every game, no matter what position we were in. We know obviously the start of the season was not exactly as we would like. We need to keep working hard together as a team to get the performances and get the results and get back up the table in the league.”