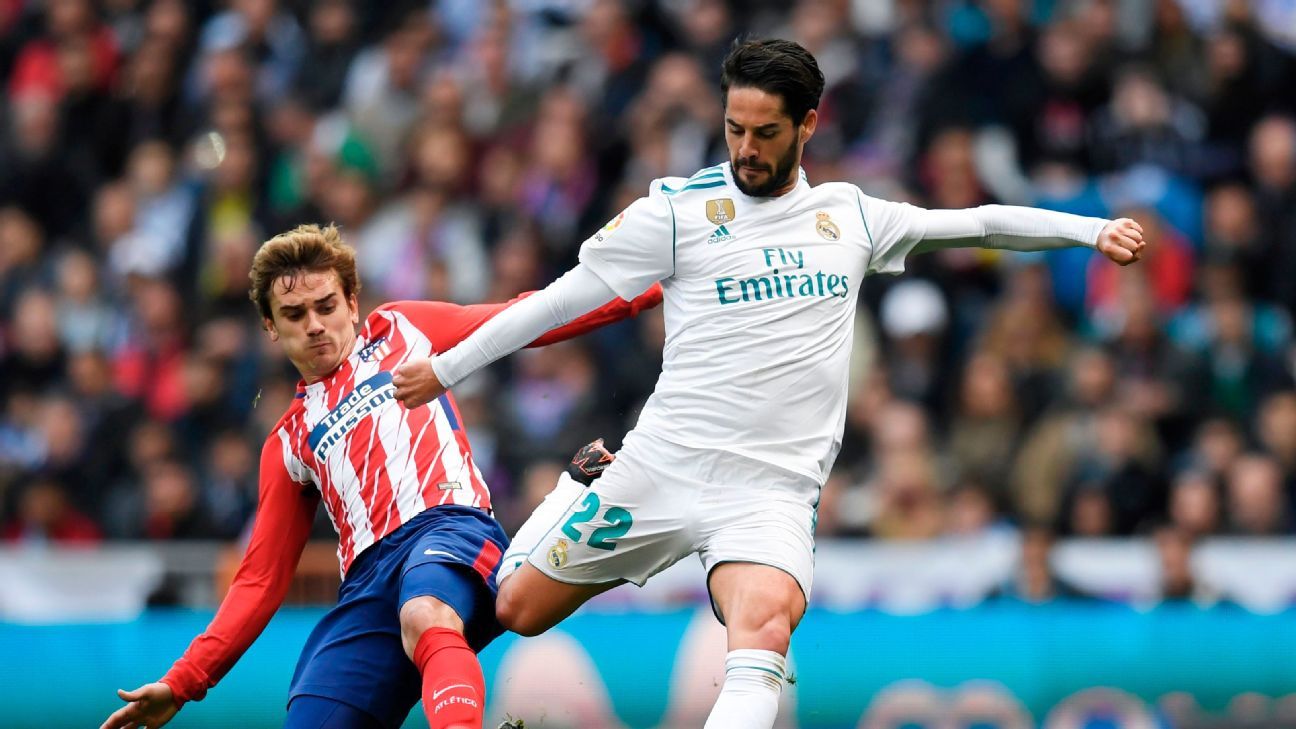 
Real Madrid face Atletico Madrid on Wednesday in the UEFA Super Cup, with both sides looking looking for a momentum boost ahead of the new La Liga season.

Real start life without Cristiano Ronaldo: How do you see it working out?

Rob Train: So far, so good. Julen Lopetegui has emphasized the team aspect since taking over and although, as Toni Kroos noted, replacing Ronaldo’s 50-odd goals a season isn’t an easy task that burden will be shared and won’t be as much of an issue if Real continue to show signs of tightening up at the back. After a lethargic loss to Manchester United, Madrid dispatched Juve, Roma and Milan with little fuss and the front three of Gareth Bale, Karim Benzema and Marco Asensio will require no time to forge an understanding. Bale has looked particularly sharp and young Vinicius Junior, who adds the unpredictability factor, has displayed flashes of his immense talent.

Ronaldo will certainly be missed. He is a one-of-a-kind player, but Lopetegui’s handling of his squad to date shows that there will be life after CR7 and that it may be just as effective as a whole as Ronaldo was as an individual.

Joe Walker: It is certainly going to be strange. Cristiano has been a thorn in Atleti’s side throughout the years, so in that sense it will be a welcome relief for Los Colchoneros. He has been so pivotal to Madrid, scoring countless crucial goals. It might take them a while to get used to not having their Portuguese safety blanket and it could well be their undoing on Wednesday, too.

His departure means Gareth Bale will be front and centre and although the Welshman has looked sharp in preseason, there remain many doubts surrounding him in the Spanish capital. The decision to allow the Portuguese to go will be judged on how well Bale does this year.

Who is having the better summer in the transfer market?

RT: As it stands, Atlético. Holding on to Antoine Griezmann was a coup in itself and the additions of Rodri, Gelson Martins and Thomas Lemar are an indicator of the club’s elevation to the European heavyweight division. Decent squad players have also been added in Santiago Arias and Nikola Kalinic.

Real’s summer business has been solid if unspectacular. Alvaro Odriozola is a huge upgrade on Achraf Hakimi and Lopetegui now has two world-class keepers at his disposal after the arrival of Thibaut Courtois. Vinicius also will be afforded his chances to shine after settling in more swiftly than many expected. Florentino Perez has again suppressed his natural urge to sign for the sake of signing. There are still three weeks of the window left and Lopetegui is in the market for a defender, with Jesus Vallejo not convincing his new coach, and a No. 9 to keep Benzema on his toes. A Galactico probably won’t be forthcoming but two experienced reserves in those positions will strengthen Lopetegui’s hand considerably.

JW: Atletico, without question. The arrival of Thibaut Courtois aside, Madrid’s summer has been a bit of a shambles, with no Galactico signing and all of Europe’s top managers turning them down.

Contrast that with Los Rojiblancos, who have not only retained the services of Antoine Griezmann, Diego Godin and Jan Oblak, but also revamped and upgraded an ageing squad.

In the middle of the park Rodri is a natural replacement for Gabi, while Thomas Lemar’s arrival is something of a coup given the megabucks Premier League interest in the player. Gelson Martins brings lightning speed to a side who love to play on the counter, Santiago Arias will provide competition for Juanfran and — let’s face it — Nikola Kalinic cannot be any worse than the hapless Fernando Torres or Luciano Vietto were last season as backup strikers.

What can your side learn from this match?

RT: Sterner examinations than facing Diego Simeone’s brick wall are hard to come by and as a season-opener, Lopetegui will be happy enough to test his mettle against a side that will push Real all the way in La Liga. The Super Cup may not be a priority for either club but Atletico are unbeaten in the competition, handing the Real manager an opportunity to lay down an early marker.

Since Simeone and Co. snapped a 14-year winless streak in September 2013, Real have won just one Madrid Liga derby in nine attempts. The competitive edge of a Super Cup is somewhat blunter than the biannual encounter but with Real hosting their city rivals next month both sides will treat the game in Tallinn as a full dress rehearsal for the real thing. Lopetegui has been flexible in his tactics during preseason and against Simeone’s 4-4-2 he’ll be able to gauge the potential of his wide men to break down one of the most obstinate defences in world football.

JW: The game provides an opportunity for Diego Simeone to see where his new look Atletico are at in their development.

With key duo Griezmann and Lemar both in the victorious France World Cup squad, they haven’t had a huge amount of playing time alongside Diego Costa. The trio will need time to gel and this match will give them more valuable playing time to forge an understanding.

RT: Lopetegui has used a 4-2-3-1 in preseason and may opt for a similar formula in Tallinn with Luka Modric still feeling his way back after the World Cup. In that formation, Benzema’s task will be to pull Atletico’s central defenders around and open up space for Bale, Asensio and Isco to exploit. By his own admission, the Real striker needs to find the net more regularly this season but his movement off the ball is a criminally underrated facet of his game. There are few more accomplished in the art than Benzema and few more alert to the dangers it presents than Godin. Who comes out on top in that game of cat-and-mouse will go some way to deciding the outcome of the match.

JW: Diego Costa vs Sergio Ramos — It had to be, didn’t it? Two of football’s pantomime villains going head-to-head and whoever gets the better of their opponent will almost certainly be on the winning side.

RT: 1-1 sounds about right, with Keylor Navas to be the hero in the shootout to send a timely little message.

JW: 1-0 to Atletico — If they cannot beat Real Madrid in a European tie after such a good summer of recruitment — coupled with their neighbour’s uncertainty — then they might never do so.