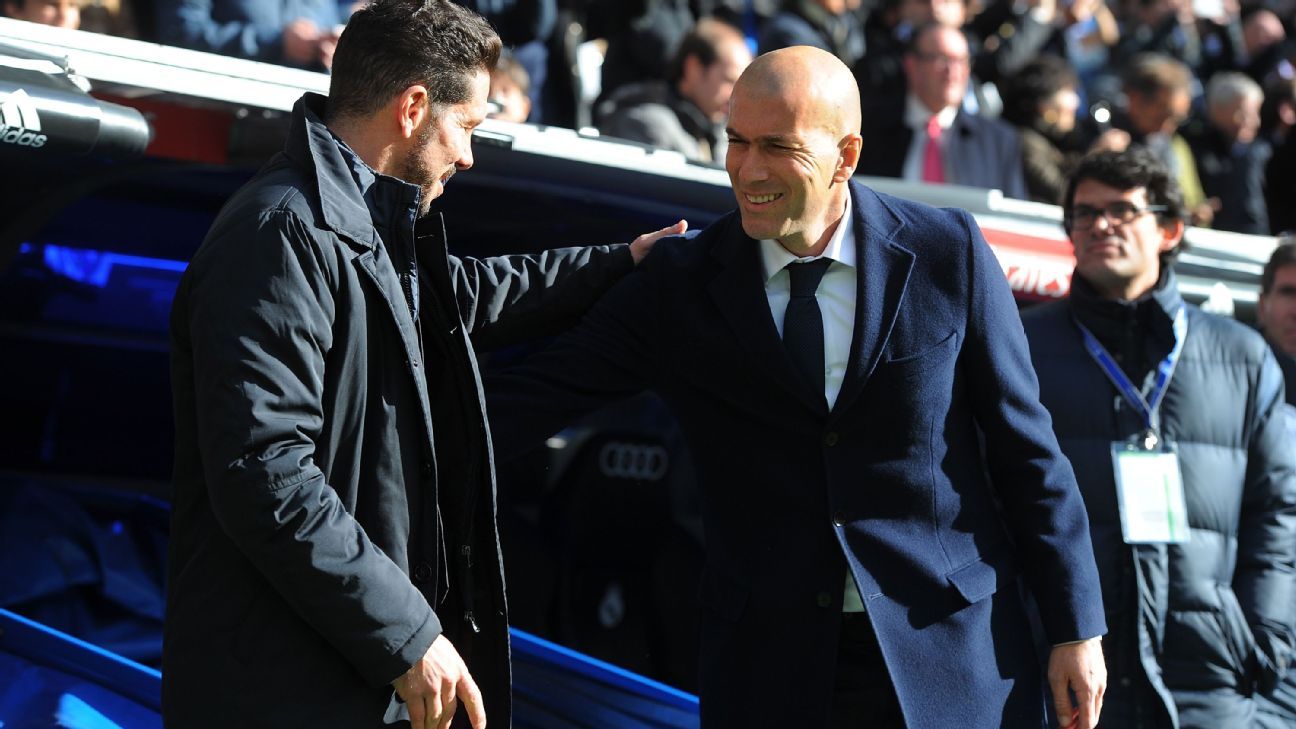 
The Madrid derby is rarely short of side narratives, but perhaps the most interesting aspect of this one — the 161st La Liga meeting between the sides — is that it really doesn’t matter much on paper.

Both Real Madrid and Atletico are between European concerns, and both have a firm foot in the semi-finals of the Champions League and Europa League, respectively. Neither side has any realistic chance of winning the league and the possibility of not qualifying for the continent’s elite club competition is as remote as Villarreal are in fifth, 16 points separating the Submarine from Zinedine Zidane’s side in third.

Local bragging rights are hardly an issue either. Both the Real boss and his Atletico counterpart, Diego Simeone, couldn’t care less about finishing above the other. This is not North London. Success in Madrid is measured in terms of trophies in the cabinet, not a single rung on the on the ladder of runners-up.

What this derby represents is a chance to do what football was originally designed to do: entertain. Zidane owes the Bernabeu a show in La Liga after an abject campaign and Simeone has little choice but to employ attack as his best form of defence. Last weekend the Argentinean was forced to call up five of his reserve team just to fill the bench and he will be without Jose Gimenez in the Bernabeu, with Sime Vrsaljko a doubt and Filipe Luis nursing a calf injury.

Cristiano Ronaldo’s voracious form and the opposition will not tempt Zidane into resting his star player with the Champions League semifinals all but assured. The Frenchman may also be inclined to smooth Gareth Bale’s ruffled feathers by fielding the “BBC” in the Bernabeu.

Simeone is likely to reply in kind with Diego Costa, who the Atleti boss described as “an animal” after his side’s 2-0 victory over Sporting, and Antoine Griezmann, with the first-choice Rojiblanco in the orchestra in support. The result should be strings, percussion and the full wind-up section. Costa and Sergio Ramos may be friendly off the pitch but they deserve a dedicated camera on it; their rivalry harks back to a different kind of derby, where chunks are there to be taken if the opportunity arises.

Zidane, meanwhile, will not welcome the sight of Simeone in the opposition dugout. The Real manager’s ill-deserved reputation as a “clapping hands” coach could not be further removed from the Argentinean’s manic touchline style. Simeone even complained of the freshly minted Metropolitano that the fans were unable to respond to his habitual cajoling of the stands from the technical area. He obviously found his angle against Sevilla in September, when his side were a point behind Barca, likening his new home to the Circus Maximus.

Now, the gladiatorial instinct that burns inside Simeone will be ignited again in the Bernabeu. Zidane has faced no opposition manager more often than the Atletico boss and the poorest return in his Liga career rests on the Argentinean’s laurels. Real average 1.57 points per game against Atletico in the league: Zidane’s CV reads two losses, one draw and one victory.

That victory was a hammer blow delivered in a 3-0 win by Ronaldo and an exceptional Isco in the final Calderon derby, a minor blemish on Simeone’s conversion of the crumbling old arena into a Madrid-repelling fortress. Otherwise, Simeone has had the measure of Zidane domestically. The Atletico boss would surely swap any of his Liga successes for a different result in the Champions League final of 2016 or last season’s semis but there is no reason to deny himself a trademark Simeone strut down the Bernabeu touchline on Sunday.

This is a one-off. A rumble in the Liga stumble. A hell-no in the Bernabeu. The gloves should be firmly off and any player wearing a pair prevented from stepping onto the pitch.

Zidane will be keen to redress his Liga balance against the one manager who has consistently proved a thorn in his side domestically and should set up accordingly. His side are a different beast in Europe and have little to fear from Juve next week after schooling the Serie A champions in Turin. Only one side in European Cup / Champions League history has ever recovered from a 3-0 first-leg deficit from the last eight stage onwards; Barcelona against Gothenburg in 1985-86.

That is a matter for the next round of European competition. In the league, there are old scores to settle. The performance is largely irrelevant. It’s all about pride on Sunday. Simeone has created an effective siege mentality in the derby. It is time for Zidane to attempt to break through that barrier. The Real boss has absolutely no reason not to. Simeone will be thinking along similar lines. Attrition need not apply in the Bernabeu.