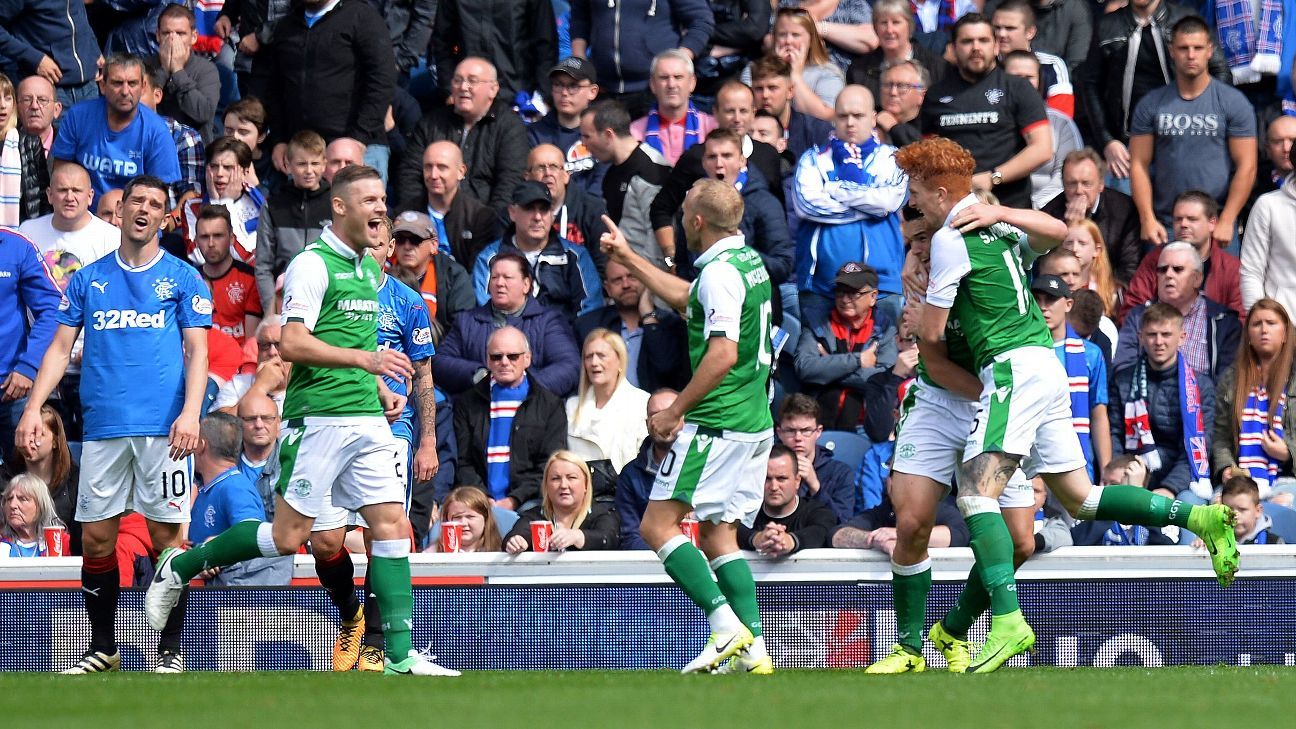 Hibernian came from behind to beat 10-man Rangers 3-2 in a pulsating but at times ill-tempered Scottish Premiership clash at Ibrox.

It was first meeting between the two clubs since the 2016 Scottish Cup final where David Gray scored a stoppage-time winner to give Hibs victory by the same scoreline, before a pitch invasion led to clashes and several arrests, and there was no little drama in this encounter.

Rangers midfielder Ryan Jack was shown a straight red card by referee John Beaton in the 35th minute following a melee and then Hibs took the lead soon after with a James Tavernier own goal.

Midfielder Vykintas Slivka drove in a third in the 65th minute before Tavernier reduced the deficit with a header but Hibs held firm for the victory.

It had promised to be so different for Pedro Caixinha’s men when Morelos, who had scored a double in the 6-0 win over Dunfermline on Wednesday night to open his account in Light Blue, leapt to head in a Daniel Candeias free-kick from wide on the right, sparking wild scenes of delight among the Gers supporters.

The stadium was still rocking when an attempted clearance from Hibs keeper Ofir Marciano rebounded off Rangers skipper Kenny Miller and slipped past the post.

Hibs striker Anthony Stokes, a former Celtic player, and Gers defender James Tavernier were both booked by referee John Beaton for a spat as tempers frayed.

The Easter Road side steadied themselves and began to work their way back into the game.

Miller almost made it two for the home side when his left-footed shot from 10 yards from a Josh Windass cut-back hit the post but Hibs raced up the park and Murray jinked easily into the Gers box before sending a low drive past keeper Wes Foderingham.

The goal was enjoyed by Hibs boss Neil Lennon, who, the last time he was at the ground in 2012 as Celtic manager, watched from the media room having been banned from the dugout for the second half by the referee Calum Murray.

The game erupted again when Light Blues midfielder Graham Dorrans reacted after a foul by Hibs counterpart Slivka and when Beaton brought some order to the chaos it was Jack who was sent packing, perhaps for raising his hands at Dylan McGeouch.

Moments later, Hibs took the lead when Tavernier, in attempting to stop a Slivka shot, could only turn the ball into his own net with Foderingham clawing desperately to keep it out.

Hibs were on top and only a fine save from Foderingham from a John McGinn drive kept out number three.

The half-time break gave everyone a welcome respite.

Caixinha reshuffled into a 3-4-2 formation and striker Eduardo Herrera and defender Danny Wilson replaced Candeias and Hodson for the start of the second-half.

However, it was the excellent Murray who came close for the Leith men with two efforts on goal, a shot then a header, before Lithuanian Slivka increased the visitors’ lead with an excellent drive from the edge of the box.

Carlos Pena replaced Morelos to make his competitive debut for Rangers but it looked a forlorn hope for the home side.

With 10 minutes remaining Wilson’s cross from the left was headed in by Tavernier from 12 yards to give Rangers some hope but they just could not muster a third and it was the travelling support who hailed the final whistle.