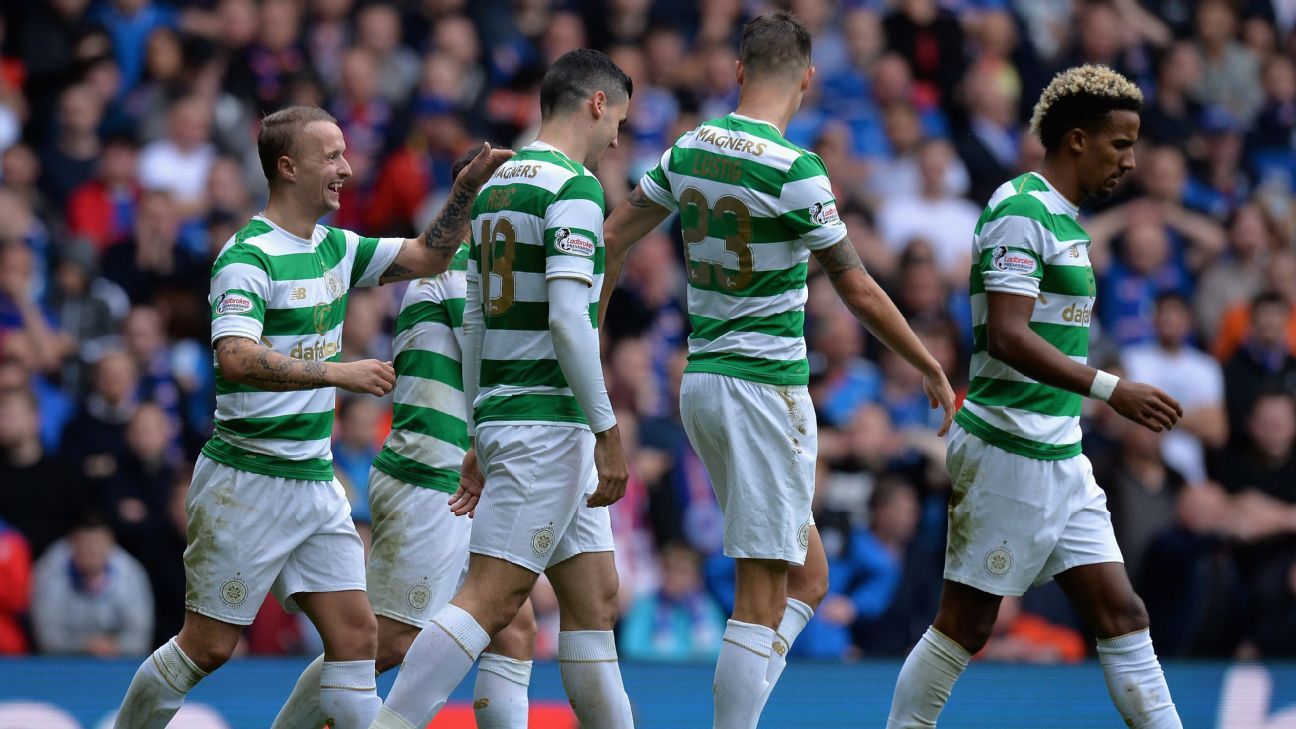 
Brendan Rodgers’ Celtic once again underlined their Old Firm superiority as they claimed a 2-0 Premiership win over Rangers at Ibrox.

Rangers were under orders to get in the faces of their bitter rivals and for 45 minutes they made the opening derby clash of the season a compelling watch.

But goals from Tom Rogic and Leigh Griffiths after the break swung the game decisively in Celtic’s favour as they opened up an eight-point lead over Pedro Caixinha’s team.

The Rangers faithful’s big prematch fears proved well-founded as centre-back Bruno Alves and left-back Declan John failed to recover in time from the knocks they sustained against Partick Thistle on Tuesday night.

That meant — along with Lee Hodson — 19-year-old Ross McCrorie was thrown in for his first Gers start in a side already containing six other Old Firm debutants.

Rodgers had no such injury worries and was able to leave the likes of Callum McGregor, Olivier Ntcham, James Forrest and Moussa Dembele on the bench as he kept an eye on Wednesday’s Champions League clash with Anderlecht.

Caixinha vowed he had learned lessons from last May’s 5-1 thrashing. Given their capitulations last term, the Ibrox support were demanding as a very minimum their side made a better fight of it and it was evident from the start Gers would not be the same pushover they were previously.

Yet there were early warning signs. Rogic forced Wes Foderingham to tip over inside the first minute while Griffiths swung a free kick just wide.

But with every scare survived, the hosts grew in confidence. Ibrox erupted with screams for a penalty just before the quarter-hour mark as Alfredo Morelos and Jozo Simunovic came together but referee Craig Thomson waved away the appeals.

It was an absorbing contest with the action racing from one end to the other. Hodson’s loose header dropped for Griffiths but Foderingham gathered, while Rangers’ stand-in captain Graham Dorrans could not keep his strike down after Josh Windass sent Morelas scampering down the left.

Morelas was having trouble keeping himself onside but then found himself arriving a fraction too late as James Tavernier dropped a cross to the back post.

The chance of the half fell to the Parkhead side as Patrick Roberts turned Hodson inside out on the left before driving straight for goal — but Foderingham was off his line quick to block.

At the end of a half where neither side had given an inch, Caixinha and Celtic captain Scott Brown even ended up nose-to-nose as the teams went down the tunnel.

Gers had given their all in the first period but there was a sense Celtic could go up another gear and so it proved.

It took just five minutes after the break for them to grab the opener. Gers should have cleared their line when Roberts’ mis-hit ball dribbled into the box. McCrorie — who up until that point had barely put a foot wrong against Griffiths — and Fabio Cardosso got in each other’s way before Hodson swiped at fresh air, allowing Australian Rogic to whip home a stunning finish.

Rangers came back at Celtic looking for a quick-fire leveller but — when Craig Gordon threw out a hand to stop Morelos’ point-blank header — the belief in the Ibrox ranks began to seep away.

And there was no coming back when Griffiths sneaked in behind McCrorie to slot home the second after 66 minutes when Roberts sent the striker racing clear.

Stuart Armstrong and Kieran Tierney could have rubbed further salt into Gers wounds in stoppage time but the hosts were relieved to hear the final whistle.