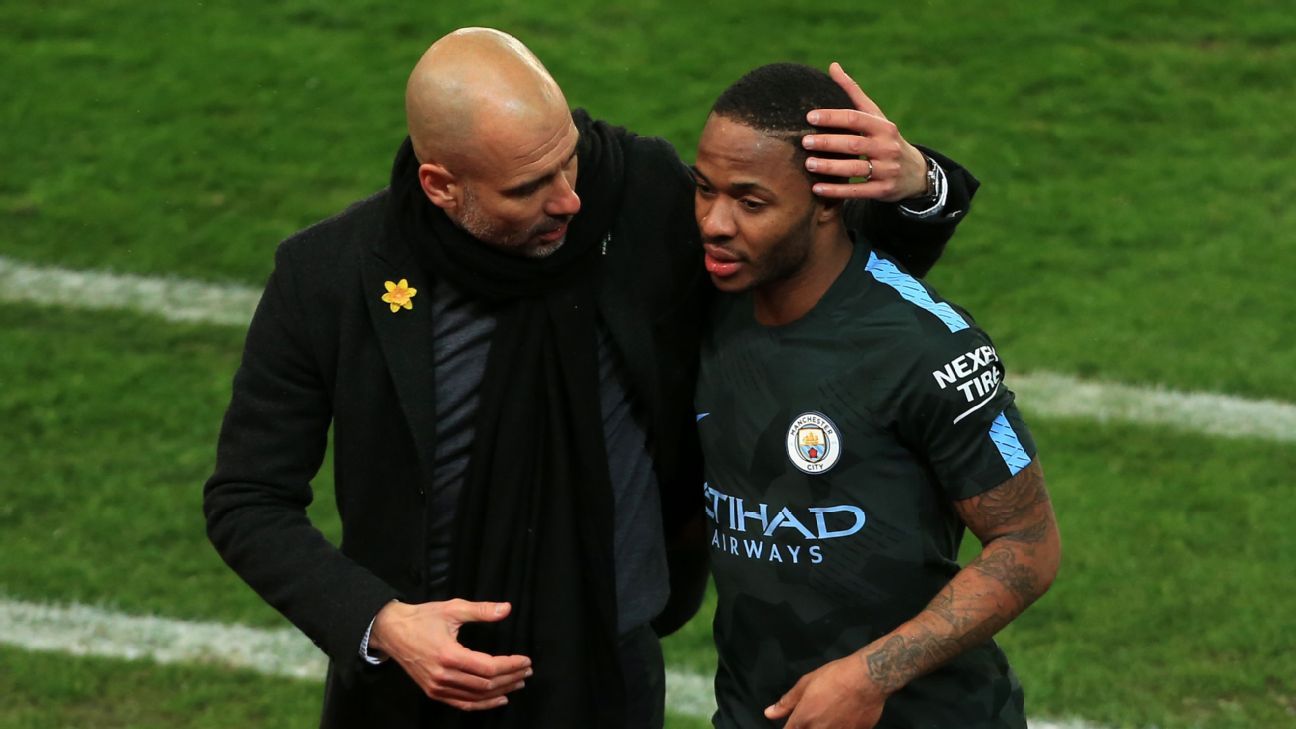 
The goal was scrappy, the finish applied from a few yards in a crowded penalty area. The immediate significance was that it put Manchester City 3-1 ahead at Tottenham. It assumed a greater importance the following day when Manchester United’s shock defeat to West Bromwich Albion made City champions.

But even before then, a different meaning was apparent. It was Raheem Sterling’s 22nd goal of the season. He had doubled his previous best tally. It used to be a mantra of Manuel Pellegrini’s that the winger should score goals. It is an achievement of Pep Guardiola that he has converted Sterling’s potential into potency.

But he has company. Around an hour earlier, Ilkay Gundogan converted a penalty. His sixth goal of the season was a new personal best. Another German, Leroy Sane, had already rattled the post. His total stayed at 13, still a career high. Injury deprived Sergio Aguero of the chance to participate; otherwise he may have closed in on his biggest haul of 33 which, nevertheless, came under Guardiola’s management.

It is part of a trend that dates back a decade. Players become more prolific under Guardiola; not all, obviously, but sizeable numbers, many of whom score far more than before. Thomas Muller, Mario Mandzukic and Arjen Robben — with 32, 26 and 21, respectively — had their finest scoring season in his Bayern Munich teams. So, at Barcelona, did Andres Iniesta (nine), Bojan Krkic (12), Xavi (14), Pedro (23) and Lionel Messi (a ludicrous 73).

The Argentinian is the great outlier. Yet it is notable both that, pre-Guardiola, his highest total was 17 and that he improved year on year under a mentor: 38 in his first year, followed by 47, 53 and then 73. But in a way Xavi is as indicative, a distributor becoming a scorer for Guardiola. The playmaker never got more than seven goals in a season for Barcelona under any other manager. Like Sterling, he doubled that for Guardiola.

A manager indelibly associated with passing gets his players scoring. Some reasons are both obvious and a feat in themselves. He has excellent footballers, often at their peak, operating in top teams that create a lot of chances and who, because of their prowess in knockout competitions, play more games than most.

But other factors reflect on Guardiola’s coaching, with his capacity to improve players, and his tactics. Sterling and Sane highlight the merits of his positional game, of the way he teaches wingers to cut inside to the penalty box when the ball is on the opposite flank. It points to improved decision-making, in terms of both where they are and when they shoot.

Each has only scored one league goal from outside the box this season. Neither is actually particularly clinical: less than 40 percent of Sterling’s attempts are on target, a lower ratio than most of the league’s top scorers, while Sane’s return of 32.7 percent is smaller still. Each has shown composure at times, but the key is how frequently they appear in space in the box to finish off passing moves.

They are assuming strikers’ positions but, perhaps, not with a striker’s prowess, yet they get there so often it may not matter. Robben told Marti Perarnau in his book Pep Confidential that Guardiola told him not to obsess about his goal return; they would just come. “I think in every single game I’ve ended up with chances to score,” the Dutchman said; Sane and Sterling may now echo those sentiments.

Like Robben, each is blessed with great pace. Guardiola has prospered by getting players arriving into the penalty area either late or at speed. Those supplementary attackers fall into three categories: electric wingers, ball-playing midfielders or those who brought a striker’s shooting from a different starting berth. Muller, whose movement is famously good, and Pedro were particularly clinical finishers; so, needless to say, was Messi.

And examining the list of men who had their most prolific season under Guardiola, it is notable how few were centre-forwards: only Aguero, who he nevertheless dropped, and Mandzukic, with whom he fell out. Admittedly, Samuel Eto’o and Robert Lewandowski both posted career-best totals under Guardiola, only for the Cameroonian to raise his under a combination of Rafa Benitez and Leonardo, and the Pole to prove more prolific for Carlo Ancelotti, both in more-conventional teams.

Yet the counter-argument, one formulated by Guardiola’s critics, could reference Zlatan Ibrahimovic, Thierry Henry and David Villa, men who scored more for other managers. The Swede was benched, the Frenchman and the Spaniard used in wider roles, charged with stretching the game to create more room for others; Messi in particular.

But that capacity to make everyone else more potent underlines Guardiola’s ethos. He can seem the scourge of the specialist scorer, looking for players with broader skill sets and, according to Xavi, once saying that if he could play with 11 midfielders, he would. The advocate of the false nine and the nemesis of the false nine has excelled in making different types of midfielders better on the ball, but also better at putting the ball in the back of the net. Their improvement can be measured in pass-completion rates but, above all, in personal-best scoring tallies.