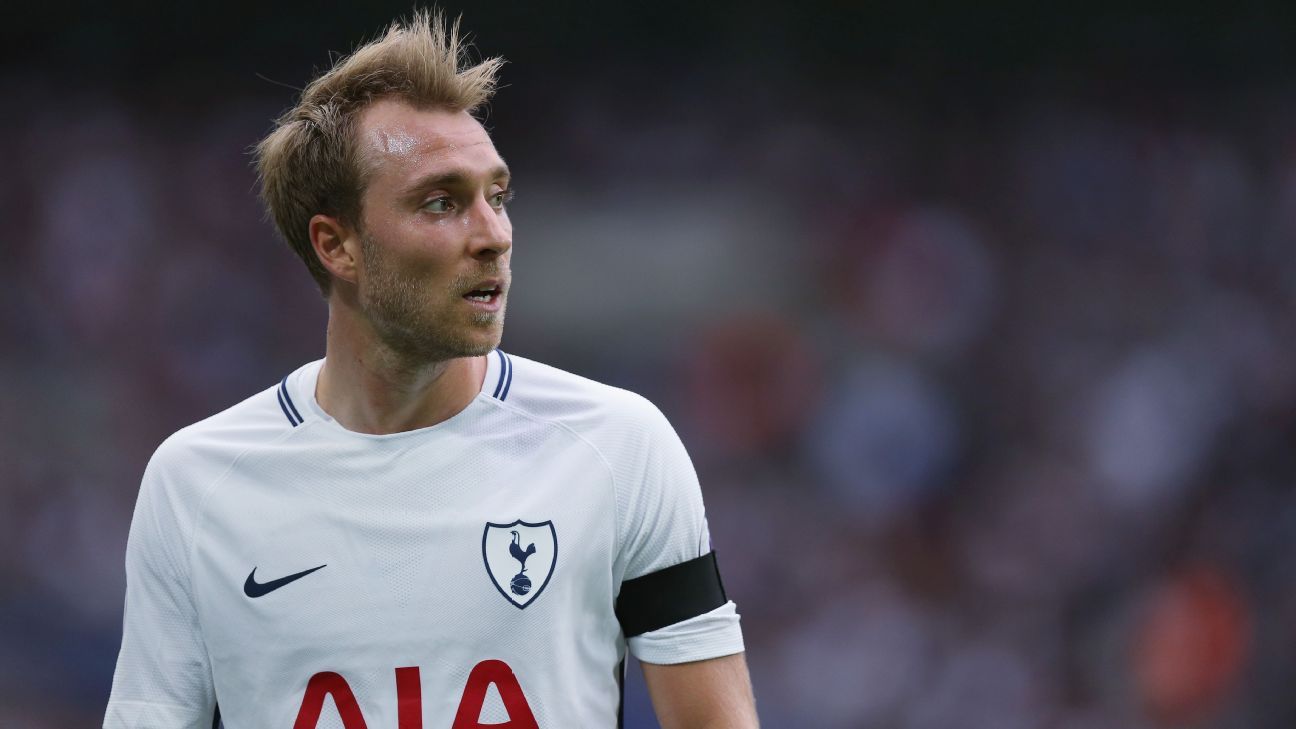 
All eyes will be on the No.10s when Tottenham visit Everton on Saturday. Wayne Rooney and Dele Alli, misbehaving England internationals past and present, are back in the spotlight for the wrong reasons, while Gylfi Sigurdsson will try to justify his £45 million fee against the club that sold him for less than a quarter of that.

Not for the first time, though, Christian Eriksen will go about his business away from the glare, even though no-one in the Premier League had a better international break. Eriksen scored a screamer and notched a hat trick of assists in Denmark’s 4-0 win against Poland on Friday, before scoring a long-range free kick in the 4-1 win in Armenia. Denmark are locked in a three-way battle for World Cup qualification and Eriksen’s brilliance could be the difference between going to Russia and staying at home.

He has scored in the last four internationals and the 25-year-old is finally living up to his star billing in Denmark. Eriksen has been recognised as his country’s best player for years, maybe even since a coming-of-age performance in the 2-1 defeat to England in 2011, but he has faced frequent criticism at home for not turning up in the biggest matches.

“We blame him. He must stand up to the criticism,” then-Denmark manager Morten Olsen fumed in Oct. 2014, after Eriksen was anonymous in a 1-0 defeat to Portugal. “It is a brutal world, otherwise you have to play at another level. It is not Ajax any more, this is not development.”

But Eriksen was named Danish Player of the Year three years running from 2013 and he is a celebrated superstar — if not at Michael Laudrup levels yet.

In England, it is a different story. Tottenham manager Mauricio Pochettino knows how important he is and so do the club’s supporters, who voted him their player of the year last season. But Eriksen rarely attracts the limelight or earns the accolades, prompting Pochettino to say last year: “He is a player that does not need too much feedback from the fans, the media, the people outside. I like him a lot because he does not need to be recognised.”

Eriksen has never been nominated as PFA player or young Player of the Year, made the team of the season or even won the Premier League Player of the Month award. Harry Kane and Alli are Tottenham’s poster boys, while Eden Hazard, Kevin De Bruyne, David Silva, Juan Mata, Philippe Coutinho, Mesut Ozil and others are generally rated above Eriksen, despite all kinds of statistical evidence to the contrary.

Since the start of the 2015-16 season, for example, Eriksen has 30 Premier League assists, more than any other player, and he has developed a habit of delivering at crucial times in big matches for Tottenham. Take his performances last season against champions Chelsea: he was the first player to score against the Blues in seven league games, before creating all four of Tottenham’s goals across the return fixture and FA Cup semifinal with sublime crosses.

Eriksen’s relative lack of recognition may stem from his inconsistency, and he has never played his very best over the course of an entire season. Last year, he was subdued for the first few months before hitting his stride from December and in 2015-16 he faded in the run-in. It is telling, incidentally, that Tottenham’s dips mirror the Dane’s.

He is still the occasional source of frustration, too. One of his assists against Poland was from a corner but he too frequently hits the first man in a Spurs shirt, while he has not scored a direct free kick for the club for nearly two years. These are minor gripes, however, and there is no doubt that Eriksen has responded to Pochettino’s call at the beginning of last season to “step-up”. There is no-one in the Spurs’ squad who the manager could less afford to lose for a long period.

If Eriksen’s international form has finally caught up with the hype, it may not be long before English football’s spotlight catches up with him.