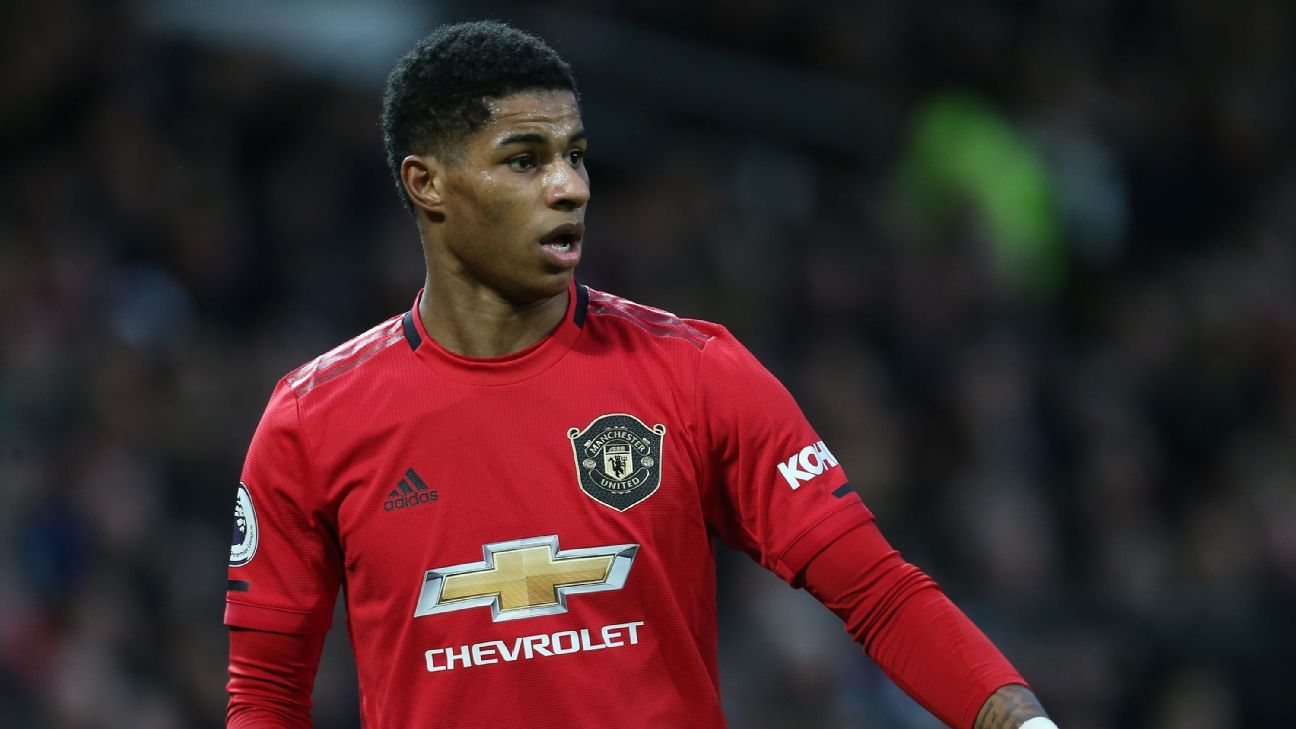 A report from The Independent claims Paris Saint-Germain are lining up a surprise move for Manchester United forward Marcus Rashford.

PSG boss Thomas Tuchel has identified the 22-year-old as “the perfect model of the modern dynamic attacking player,” and is willing to spend up to £100 million to land his No. 1 target, despite the coronavirus pandemic potentially causing an unusual transfer market.

The Parisians are not the first European side to show a keen interest in the United academy graduate, with Barcelona making tentative inquiries to the Rashford camp last year, only to instead pursue a move for Atletico Madrid‘s Antoine Griezmann.

A deal to take Rashford to the French capital will be a tough one to complete, however, with the forward enjoying a great working relationship with United boss Ole Gunnar Solskjaer, along with a lucrative contract at Old Trafford that lasts until the summer of 2023.

12.21 BST: AC Milan have taken up the option to permanently sign Denmark captain Simon Kjaer from Sevilla on a two-year deal.

Kjaer joined the Serie A side in January on a six-month loan with AC Milan now permanently extending his stay until June 2022.

He has played 13 times in all competitions for the Italian side who are in seventh place.

The 31-year-old spent the first half of the season at Atalanta and has previously played for Roma and Palermo.

11.46 BST: Thomas Partey will reject a move to Arsenal and sign a new improved contract at Atletico Madrid, according to Diario AS.

The newspaper cites claims from Ghana Soccernet that Partey, 27, is close to agreeing a deal that would more than double his salary and increase his bargain €50m release clause to €100m.

The midfielder has been a key player for Diego Simeone’s side in an impressive run since the La Liga restart, but AS reports that he’s only their 16th highest-paid player.

11.07 BST: Barcelona director Xavier Vilajoana has said the club turned down the chance to bring Take Kubo back last summer because of his financial demands.

Barca were expected to re-sign the youngster, who had previously played at La Masia, but were beaten to his signature by Real Madrid, who subsequently loaned him to Mallorca.

Barca’s decision to pass on Kubo has been thrust back into the limelight this week following the signing of Brazil youngster Gustavo Maia for €4.5m. Kubo joined Madrid in a deal worth an initial €2m. However, Vilajoana insists that doesn’t tell the full story of the cost involved.

“He was asking for much more than the money we’ve spent on Maia,” Vilajoana told Catalunya Radio. “[He wanted] certain obligations, a long-term contract and [high] salary.”

Kubo signed a six-year deal with Madrid last summer. He had joined Barca’s academy as a 10-year-old but was forced to leave in 2015 when the Catalan club was investigated for breaking FIFA’s regulations on signing young players from abroad. He returned to his homeland to play for FC Tokyo.

Addressing the recent signing of Paris Saint-Germain defender Tanguy Nianzou Kouassi on a free transfer, the Bayern CEO told France Football: “Bayern Munich have never signed a player to weaken a rival. Our relationship with PSG is very good. I rate my counterpart Nasser al-Khelaifi, he does an excellent job. The relationship to [sporting director] Leonardo is also very good.”

“If such a talent plans to continue his career abroad, it’s logical that a club like Bayern Munich should be interested,” Rummenigge said.

09.30 BST: Borussia Dortmund do not expect Manchester United to make a move for Jadon Sancho before they have qualified for the Champions League as the England winger does not want to play in Europa League next season, German outlet Sport Bild reports.

Dortmund have in the past said there will not be any cut-price sale of Sancho, who is under contract at the Westfalenstadion until 2022. They are holding out for a fee in the region of €120m and have said that from a “sporting perspective” it makes sense that the 20-year-old stays at the club for another season.

United are fifth in the Premier League but, with three games remaining, it could all come down to the final day of the season when they travel to Leicester City. Both sides are on 59 points, but the Foxes have a marginally better goal difference.

Dortmund are reportedly not expecting any progress in the transfer saga before the end of the Premier League season. While Sancho would like to link up with his friend Marcus Rashford, he also feels that he needs Champions League football.

Earlier this month, Dortmund stated that they will not wait until the final week of the transfer window, Oct. 5, and reports have suggested they want a decision one way or the other until the end of August.

08.53 BST: Valencia will put all of their players, excluding Carlos Soler and Jose Luis Gaya, on the transfer list, as the club looks to make wholesale changes this summer, according to Cadena SER.

Valencia have endured a turbulent campaign and will miss out on European football next season. They have already notified the players that the club will listen to offers with only Spanish midfielder Soler and Spanish left-back Gaya considered non-transferrable.

Valencia have yet to appoint a coach for next season after sacking Albert Celades last month. Sporting director Cesar resigned following Celades’ dismissal.

08.26 BST: Bayern Munich defender David Alaba favours a move to Spain over a transfer to another league, Bild reports.

The 28-year-old, who is in the final 12 months of his current deal at the Allianz Arena, could be allowed to leave the club for as little as €36m.

Alaba’s €20m-a-year salary, however, would be too much for La Liga giants Barcelona and Real Madrid. This would leave Chelsea, Paris Saint-Germain and Manchester City as possible destinations for the Austria international who has been at Bayern since the age of 16.

City, whose Champions League ban was overturned on appeal this week by CAS, are planning to spend big this summer and Alaba has worked under Pep Guardiola during the Catalan’s time at the Allianz Arena.

But Bayern coach Hansi Flick has also not given up on the versatile star, and only recently said that he’d be incredibly delighted should Alaba remain at the club.

08.00 BST: Pep Guardiola has refused to give any assurances about his future despite Manchester City’s successful Champions League ban appeal.

Guardiola has a year left on his contract at the Etihad Stadium and when asked at a news conference on Tuesday whether the decision by the Court of Arbitration for Sport to overturn a two-year European ban handed down by UEFA increased the possibility of extending his stay, the 49-year-old was non-committal.

“This club is incredibly solid with Pep and without Pep,” said the City manager. “This club had success before my arrival here, with [Roberto] Mancini and with [Manuel] Pellegrini they won a lot of titles and they played really good football.

“So without me, when I leave — I don’t know when that will be — the structure of the club wants to grow and to be solid, this is the most important thing.”

Mario Mandzukic looks set for a return to Serie A this summer, after leaving Qatari side Al-Duhail, and Calciomercato claims the Croatian is attracting interest from a trio of Italian sides.

The 34-year-old left Juventus at the start of the calendar year after falling out of favour under new manager Maurizio Sarri, but after opting to terminate his contract in the Gulf State after making only 10 appearances, the forward has set his sights on a return to Italy.

Inter Milan are believed to be the front-runners for the former Bayern Munich striker’s signature, but Fiorentina and Benevento are also believed to have made contact with the player’s agent. Nerazzurri boss Antonio Conte says he believes that the target man represents a cheap replacement for Lautaro Martinez, with the Argentinian forward being heavily linked with a move to Barcelona.

Roma will make a move for Napoli striker Arkadiusz Milik if they lose star striker Edin Dzeko in the summer, according to reports at Gazzetta dello Sport.

Inter Milan have been linked with a move for 34-year-old Dzeko, and Conte’s side are believed to be lining up a bid of around €15m for the Bosnian, which would represent great business for Roma for a player who is arguably in the latter stages of his glittering career.

Milik, meanwhile, is attracting interest from a long line of European clubs, but sources in Italy claim the Poland international favours a move to table-topping Juventus. However, with the champions-elect boasting a bulging forward line, it is unlikely they will pursue a deal for the 26-year-old in the upcoming transfer window.

— Arsenal utility man Ainsley Maitland-Niles looks set to leave the Emirates Stadium this summer, with The Athletic claiming the 22-year-old has conceded that his time in north London is up. The right-sided full-back and midfielder has struggled for game time under Arsenal boss Mikel Arteta, and the England youth international now appears ready to move on to pastures new.

— Talks to keep promising Rangers youngster Kai Kennedy at Ibrox have stalled, according to the Daily Record, placing European giants Bayern Munich and Manchester City on high alert. The 18-year-old has made just one appearance for Steven Gerrard‘s side this season.

— Calciomercato claims PSG are considering a bid that would meet the release clause of Roma midfielder Lorenzo Pellegrini, but sources in Italy believe the Azzurri international wants to remain in the Eternal City. The 24-year-old has become an integral part of the Roma side since signing from Serie A rivals Sassuolo in 2017.