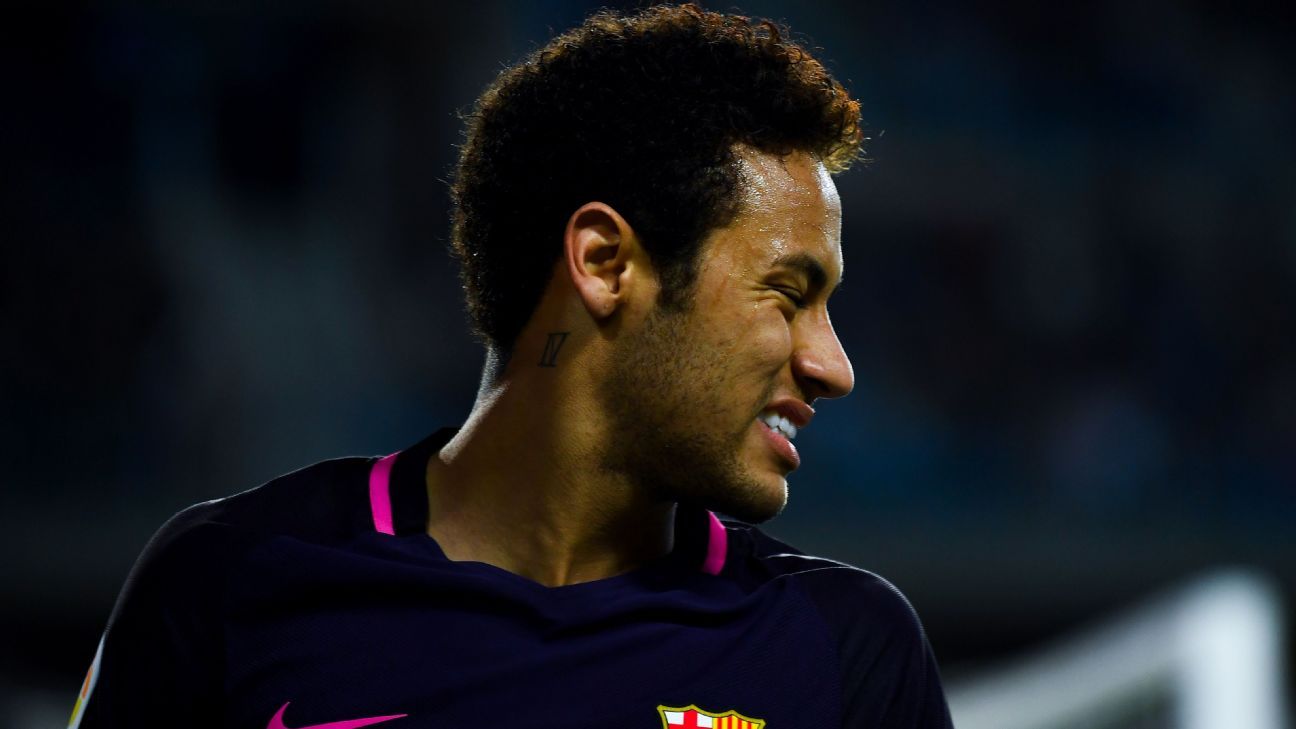 
PARIS — Paris Saint-Germain have wanted Barcelona’s Neymar for a long time and despite numerous disappointments over the past few years, the French capital outfit’s ambitious Qatari owners are still desperate to see the Brazil international lining up at Parc des Princes in the future.

PSG have been made aware that a deal to bring Neymar to Paris this summer is possible and the Ligue 1 giants are ready to start serious talks, a source has told ESPN FC.

Esporte Interativo reported on Tuesday that the 25-year-old has accepted Les Parisiens‘ offer and will move for a world-record €222 million transfer fee.

The same Esporte Interativo journalist has since added that the man from Mogi das Cruzes in Sao Paulo has already told PSG players that he will be joining them this summer.

ESPN FC’s source said Neymar has not agreed a deal yet but that serious talks are due to commence soon and that sporting director Antero Henrique has already returned to France from the USA to step up their interest in the South American superstar and Arsenal’s Alexis Sanchez.

Everybody knows that PSG are one of the richest clubs in world football and Neymar’s exorbitant minimum fee release clause at Camp Nou is also common knowledge.

However, what must Les Parisiens actually do this summer to make the signing of Barca’s No. 11 feasible?

It is not as simple as activating Neymar’s release clause and agreeing personal terms. In order for the Oryx Qatar Sports Investments-owned (QSI) club to be able to bring the player in, they must free up some space — at least in terms of the wage bill.

Before the signings of Dani Alves and Yuri Berchiche, PSG’s summer transfer budget was set at around €220 million — conveniently close to the value of Neymar’s release fee value — all within the financial fair play (FFP) boundaries.

Berchiche cost an initial €13m and could cost more in add-ons, while Alves arrived on a free transfer but has been handed a significant salary.

To balance that out, Jean-Kevin Augustin was sold to RB Leipzig for roughly the same amount that Berchiche was signed from Real Sociedad and now assistant sporting director Maxwell, Salvatore Sirigu, as well as a number of youngsters, have left the wage bill.

Right now, PSG have most of the money they will need to activate Neymar’s release clause and the capital club are still looking to sell other players.

Serge Aurier, Hatem Ben Arfa and Grzegorz Krychowiak have all been told they can leave, while the likes of Blaise Matuidi, Lucas Moura and Jese Rodriguez could also be flogged in order to raise some significant funds.

One thing that PSG must make sure they do before activating Neymar’s release clause is ensure they have enough capital to complete the move and satisfy the player’s financial demands.

Barca and PSG are already at odds this summer because of Marco Verratti and Neymar’s transfer would be seen as fanning the flames.

The Italy international is highly unlikely to be included in any potential Neymar deal. PSG are trying to build their future around Verratti and putting the two in the same starting XI would be a serious statement of intent.

Unlike the Brazilian, Verratti has no minimum fee release clause. So, as long as PSG can fund Neymar’s transfer fee and wages, they will still be under no pressure to sell the Azzurri star and their commercial position will have been massively strengthened.

Ultimately, PSG’s ability to swoop for Neymar might come down to whether Aurier, Ben Arfa, Krychowiak and Jese can be shifted permanently.

There is so much capital tied up in that band of mostly deadwood that it would better serve going towards an indispensable figure like the Samba star.

Aurier alone is expected to fetch between €20-€25m and it could be that selling the Ivory Coast international puts PSG into a position where they can launch their Neymar offensive.

Henrique is already back in Europe with business to do and his ability to find new homes for undesirables such as Aurier, Ben Arfa and Krychowiak could make all the difference.

PSG are also very keen to bring in AS Monaco’s Fabinho this summer but Les Monegasques are unwilling to sanction a sale to their Ligue 1 rivals for now, despite the fact the Brazil international wants to move to Parc des Princes after being won over by Henrique’s vision.

The French juggernaut probably will not be able to land Neymar, Fabinho and Alexis Sanchez but one or a combination of two of the three could be possible and it is up to Henrique to satisfy Emery’s needs and boost star power at the same time.