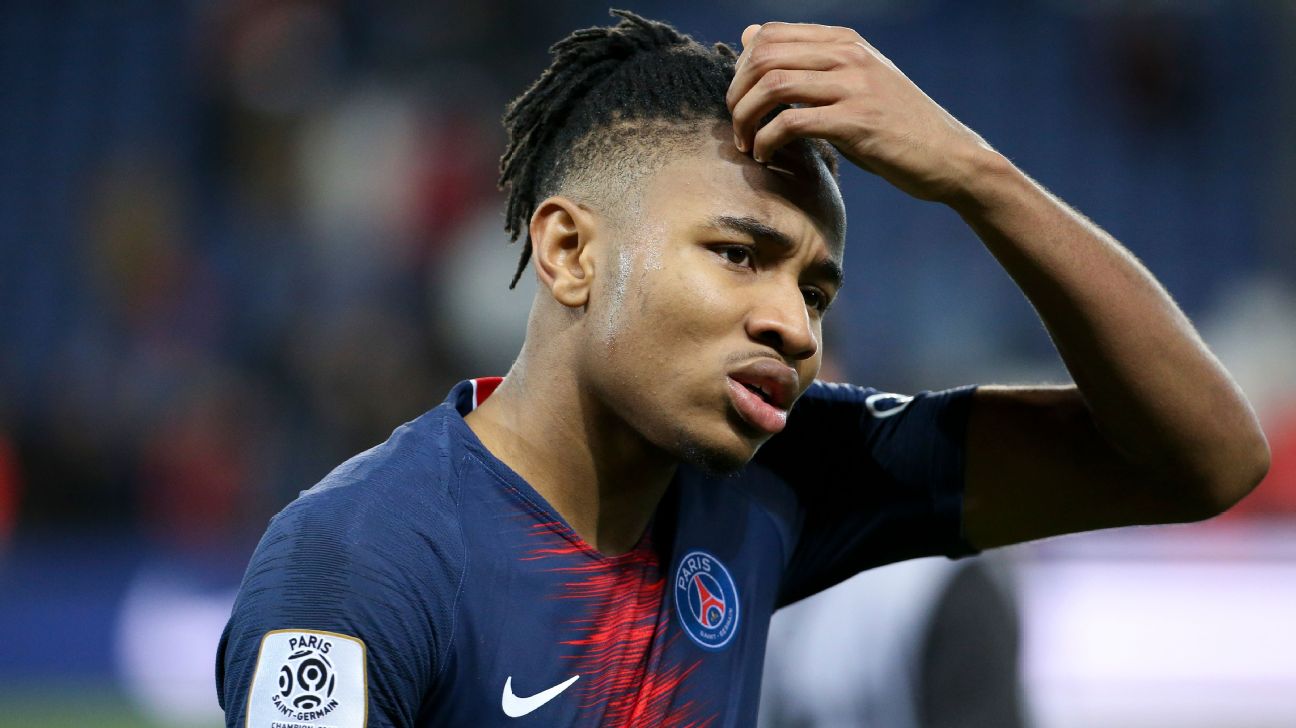 
When it comes to Paris Saint-Germain’s young stars and their exits from the club, the list is long, and all indications suggest it will keep getting longer and longer. Last summer Paris Saint-Germain sold Moussa Diaby (Bayer Leverkusen), Stanley N’Soki (Nice), Christopher Nkunku (RB Leipzig), Timothy Weah (Lille) and Arthur Zagre (AS Monaco) for a combined amount of €54 million.

None of them was older than 21, and all had arrived at the club between the ages of 12 and 15.

A year earlier, it was Jonathan Ikone (Lille), Odsonne Edouard (Celtic) and Yacine Adli (Bordeaux) who were sold all together for just less than €20m. That same summer, Claudio Gomes, one of the most promising talents in PSG’s U19 team, was poached by Manchester City after he decided not to sign his first professional contract in Paris.

– Stream new episodes of ESPN FC seven days a week on ESPN+
– Stream every episode of 30 for 30: Soccer Stories on ESPN+

And before that, there also were Matteo Guendouzi (Lorient), Kingsley Coman (Juventus), Mike Maignan (Lille), Moussa Dembele (Fulham) and many more. Despite Paris being their hometown, PSG their club and the Parc des Princes their dream, they decided to leave almost as soon as they could.

This is nothing new. The pioneer was Nicolas Anelka, who left for Arsenal in February 1997 at the age of 17 for hardly any money.

In 2008, the more unknown Gael N’Lundulu, then a promising striker, signed for Portsmouth, at the time an upwardly mobile Premier League side. In 2009, Chris Mavinga joined Liverpool. Both were promising academy products, and both moved on free transfers.

Seeing their best young talent leave for next to nothing, some without even playing for the first team, was never part of the PSG plan. So what’s gone wrong?

In the summer of 2011, when Qatar finalised their takeover of PSG, there was one clear message in their desire to build a great team capable of dominating French football and winning the Champions League: Focus on the club’s academy so that instead of having to buy Lionel Messi one day, Paris would find the next Messi in their own academy, develop him, nurture him, give him his debut and then have him triumphing while wearing their shirt.

Almost 10 years later, PSG have not yet found the next Messi. Nowhere near it, in fact. They have spent a lot of money, budgeting €10m annually for the youth setup, and the results have been significant. Last year, the French federation named the PSG academy the best in the country, putting an end to the dominance of Lyon, who had held that title in each of the previous six years. The development of some of these PSG youth players has been impressive, yet the biggest talents keep leaving.

There are two primary reasons for the exodus: the absence of a pathway to PSG’s first team and the lack of game time. In a team of superstars, a youngster has to be truly excellent and better than the bigger names to play regularly. Coman could not wait any longer for first-team opportunities when Laurent Blanc kept snubbing him in 2013-14; Diaby and Nkunku didn’t believe that Thomas Tuchel had enough faith in them to play them as often as they wanted.

“Every case is different, but most of the youngsters who left then succeeded in their new club,” Edouard told ESPN before the coronavirus pandemic. “Becoming a starter in Paris is difficult, especially in attacking positions like mine. If we think that we are ready to play, we have to play. There is no point waiting. That’s why so many young players like me decide to take another direction: to have game time and express ourselves.”

The Qatari owners want stars such as Neymar or Kylian Mbappe. They need those big names for the image of the club, for the revenue they bring in merchandising and sponsorship and for the immediate results they crave. They don’t want to go down the Ajax route and base everything on the academy.

Nevertheless, they could have gone for a bit of both: have superstars and homegrown talents, a bit like the “Zidanes y Pavones” at Real Madrid in the early 2000s. Paris did so at times in previous seasons, when you regularly had four or five Paris-born-and-bred academy graduates on the pitch at the same time. But only Presnel Kimpembe and Adrien Rabiot really succeeded — with the latter still leaving on a free last summer for Juventus after a drawn-out contract battle with the club.

Luis Fernandez — who was part of some of the most successful periods of the club’s history both as a player (winning the French title in 1986) and manager (lifting the Cup Winners’ Cup in 1996) — became the head of the academy in 2017. He only lasted a year, leaving due to being disappointed by the direction of the club.

“The young players are not a priority anymore,” Fernandez told Le Parisien last year. “We will see the consequences. The reserve team was removed. I don’t know what is the aim of the club’s youth policy because right now; they are getting rid of their young players.”

Like Fernandez, many coaches and scouts have been disillusioned by the club’s youth policy, the players’ departures and the lack of appreciation for their work. The staff keeps changing. Last year, PSG took the decision to scrap the reserve team and only have a U19 team. They believed that the reserve team, playing in the fourth division, cost too much for what it delivered. The message: Either a 20-year-old player is good enough for the first team or he isn’t and can be sold.

From PSG’s point of view, not all the players who left were ready or good enough to play more. They argue that those players were offered good deals and decided not to take them because they could get a big signing-on fee somewhere else and potentially more money. For the club, it’s easier to cash in on them to satisfy Financial Fair Play and balance the books when bigger names on much bigger wages such as Julian Draxler or Layvin Kurzawa don’t want to move. But it doesn’t reflect well on PSG’s image. And it causes another issue: Young Parisians often prefer joining an academy other than the one in Paris because they believe they’ll have a clearer pathway to the first team somewhere else.

This is exactly what happened with Paul Pogba, who chose Le Havre instead; and Thierry Henry and Mbappe, who both picked Monaco. Like many others, they could have gone to PSG and decided not to.

Paris and the surrounding area is one of the biggest, if not the biggest, hotbeds of football talent in the world. At the 2018 World Cup, a third of the title-winning France squad was from Paris (Pogba, Mbappe, Kimpembe, Alphonse Areola, N’Golo Kante, Benjamin Mendy, Steven N’Zonzi and Blaise Matuidi).

There are a few reasons to explain the extraordinary footballing success of the area. It’s populated by around 12 million people living in the capital and its banlieues. The culture of street football, coming from council estates and their numerous football pitches, means that the game is played everywhere, all the time, in a very competitive environment with the emphasis on technical ability. Finally, the organisation of grassroots football with so many clubs, many divisions, affordable costs and good coaching means that from a very young age, the instruction that children receive is very effective.

For PSG, it is a dream. On their doorstep, they have an almost unlimited well of talent in every age group. But the abundance of ability is also a problem. The issue is that all those prospects are highly coveted. Scouts are at every game, home and away. Other European clubs are in constant contact with the players’ agents and families.

“[Clubs] know that the PSG starlets might want to leave at some point before they sign their first professional contact or can be tempted to leave,” a French agent close to the club tells ESPN. “So they are on [players’ families] constantly. Agents also know that you can get a bigger commission if their players leave to sign a first professional contract somewhere else.”

All of which has created a situation in which the PSG academy has become one of the best in Europe despite the first team hardly benefiting from it.

The latest starlets poised to leave the club are Adil Aouchiche and Tanguy Kouassi. Both 17, they have not yet signed their first professional contract despite being involved with the first team this season, especially Kouassi, who played 13 matches in total and was outstanding in midfield or defence. Aouchiche has been linked with Saint-Etienne, Lille, Bordeaux and Arsenal, while Kouassi is in advanced talks with RB Leipzig. They are two of the biggest talents of their generation, and both will leave on a free transfer.

As summers go by in Paris, things don’t really change.