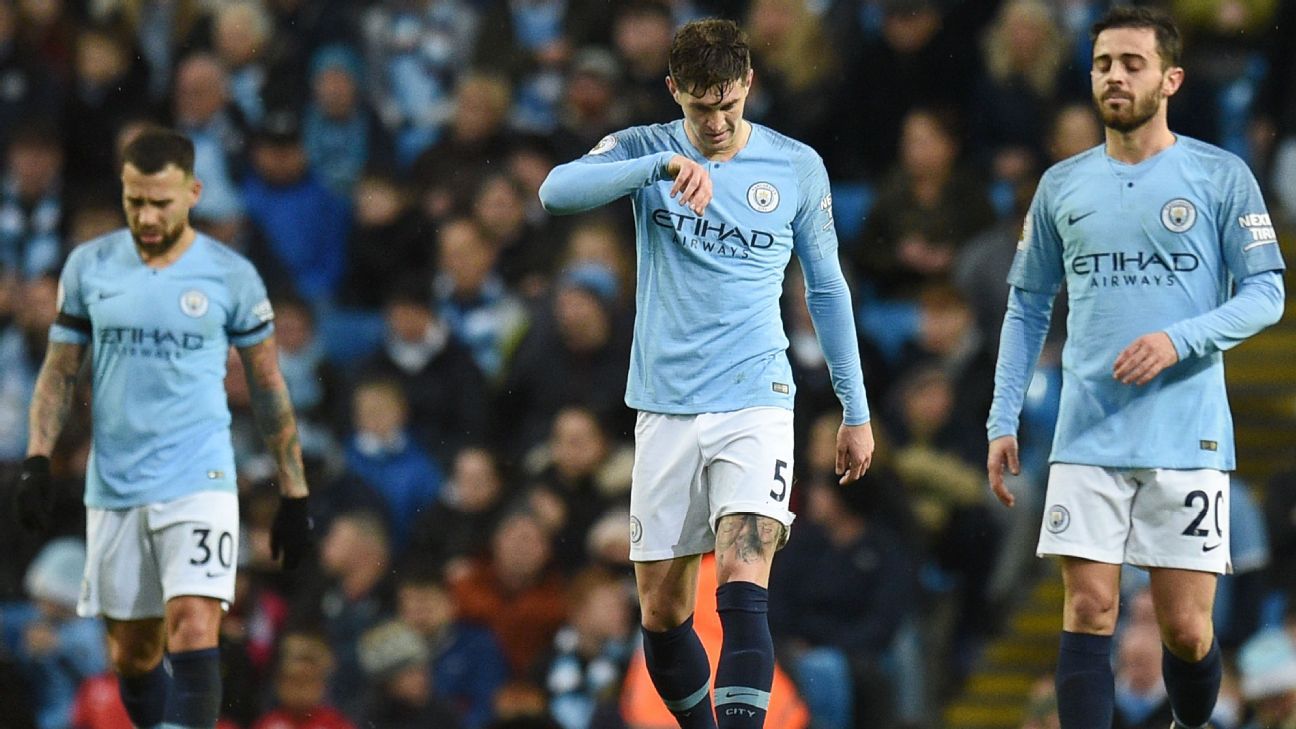 Just how vulnerable are Manchester City?

Down is up, black is white, dogs and cats are living together: Manchester City are vulnerable. Ultimately, City’s 3-2 defeat to Crystal Palace at the weekend might not turn out to be a particularly big deal come the final chalking up at the end of the season. Then again, this could prove a crucial moment in the title race because it exposes Pep Guardiola’s side to pressure, which last season they hinted they could buckle under.

The astonishing amount of control that Guardiola demands of his side is among City’s biggest strengths, but it could also represent their biggest weakness. Or, more specifically, how they react when that control is broken. City are astonishing front-runners, and any team that cowers in front of them is likely to be beaten to a pulp. But when someone challenges them, when things start to go slightly wrong, for the plan to go a little awry, they can be beaten.

They showed it against Liverpool a couple of times last season, both domestically and in Europe, and of course in the infamous Manchester derby where they had a once in a generation chance to win the title against their rivals, but choked. But they were rarely under pressure in the league table: at this stage a year ago, they were 11 points ahead of United.

Last season they coped with small, isolated moments where they were asked questions, scoring late goals against sides like Southampton and Bournemouth, but when that pressure is bigger and more significant, they have displayed their fundamental weakness, and arguably the fundamental weakness of any Guardiola side. When things don’t go to plan, they’re not sure what to do.

So now, with Liverpool four points ahead at the top of the table, what will City do? How will they react? Against Leicester, who won at Chelsea on Saturday, we might begin to see.

What will Solskjaer do when he has to manage?

If Ole Gunnar Solskjaer’s six months or so at Manchester United is thought of as a free swing, his opening game against Cardiff was effectively someone gently throwing the ball into the air so he could hit it as far as possible. By Neil Warnock’s own admission Cardiff were terrible, and if anything the 5-1 scoreline flattered them. This wasn’t so much a football match more a welcoming party for Solskjaer, but that changes from now.

On paper his friendly start continues, United facing a Huddersfield side who have lost their last five games, only scoring three goals in the process, but they haven’t been blown away in those defeats. David Wagner’s side will not be the pushovers that Cardiff turned out to be.

Not being Jose Mourinho worked for Solskjaer at the weekend and that novelty may stand for a short while longer, but sooner or later he will have to actually manage if his spell as United manager isn’t to be simply doomed as a romantic bridging period before a real manager takes over.

Really, the surprise isn’t so much that Chelsea lost to Leicester last time out, more that despite that defeat they’re still fourth in the league. Maurizio Sarri took over with barely any preseason in which to implement a total change in style, and has been operating since August without a reliable centre-forward, but Chelsea have a point more than they did at the same stage last season: given the differences in expectations, he’s doing a fine job.

But Sarri still has a pretty fundamental problem to fix, namely that Chelsea have seemingly started switching off after around the hour mark of games, something that led to defeats to Wolves and Leicester, and will cost them more if it continues. What can he do to fix it? Who knows, but he must find a solution soon in order to keep their Champions League spot.

Burnley must turn progress into points

Burnley are getting better. They only just lost to Tottenham, after which Sean Dyche was very positive about their performance, and the 3-1 defeat to Arsenal wasn’t entirely reflective of the game overall. The trouble with progress, much like artists being paid in “exposure” and “opportunity” by miserly clients, is that it doesn’t do much tangible good. The artists can’t pay their electricity bill with exposure, and Premier League teams won’t get out of trouble with mere progress.

Putting a positive spin on things, logic states that these positive performances against the big teams should mean that results will come against the lesser lights. So now, with two home games against Everton and West Ham over the next week, points are crucial if Burnley are to escape their current predicament.

A clean sheet now, and next… a win?

Fulham are taking baby steps forwards. The performances have shown some promise, and against Newcastle at the weekend they achieved the massive feat of keeping a clean sheet, their first of the season. At his introductory press conference after being appointed, Claudio Ranieri suggested he would treat his squad to a McDonald’s when they kept an opponent at bay, so hopefully they won’t be too full of Happy Meals when Wolves visit on Boxing Day.

Fulham are slowly piecing things together, but only one piece at a time: keeping a clean sheet is great, but it isn’t all that helpful unless you stick a goal or two in at the other end, which their theoretical key sources haven’t been doing of late. Aleksandar Mitrovic hasn’t scored since November, nor has Andre Schurlle, Tom Cairney hasn’t notched all season and Ryan Sessegnon has been injured. Keeping Newcastle out was a step in the right direction, but Fulham need more than just one step now.