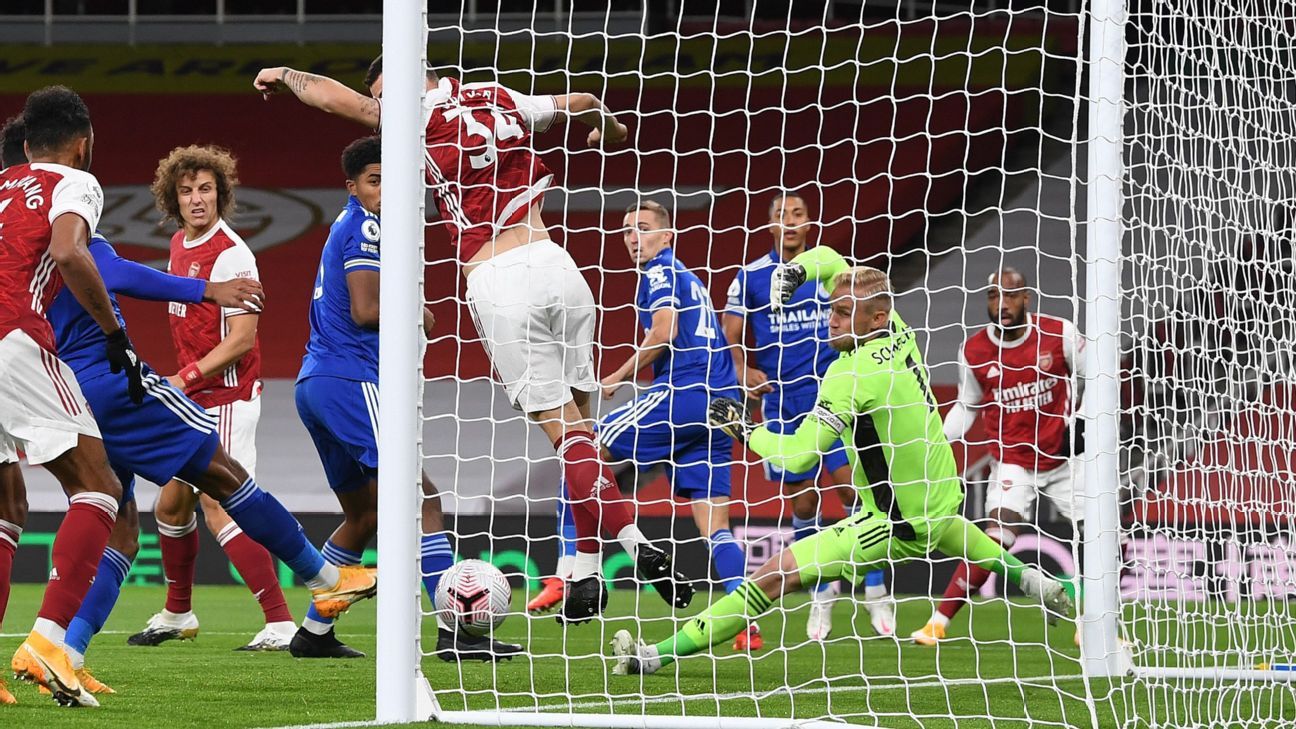 Throughout the 2020-21 Premier League season we are collecting the biggest VAR incidents and rating each one for controversy — and VAR.

– How VAR decisions have affected every club
– How VAR has changed for 2020-21
– VAR in the Premier League: Ultimate guide

What happened? Arsenal thought they had the lead in the fourth minute when Alexandre Lacazette headed home, but the linesman raised his flag for offside against Granit Xhaka. He was in an offside position, stood virtually on the goal line, and had swerved out of the path of the ball to allow it to go in

What about the review? The VAR, Paul Tierney, checked to make sure the offside was correct and decided there was no clear and obvious error, as Xhaka’s position had impacted upon Kasper Schmeichel’s ability to make save and Justin’s to clear it.

Controversy rating 7/10 – This one certainly split opinion among former referees, as Xhaka was not in the line of vision of Schmeichel. But some did feel that Xhaka’s position so close to goal, and his moving out of the way of the ball for it to go into the net, could only impact upon opponents who could play the play.

VAR rating 5/10 – The “clear and obvious” requirement for an overturn always meant it was unlikely the goal would be reinstated, but as there was clear doubt over how much influence Xhaka had on the outcome perhaps a pitchside review would have removed any controversy. Would the VAR have disallowed it if the linesman had not ruled it out? Probably not.

What happened? Liverpool’s Fabinho attempted to win the ball off Oliver McBurnie on the edge of his own box, but went through the Sheffield United player in doing so. Referee Mike Riley awarded a free kick on the edge of the box.

What about the review? The VAR, Andre Marriner, reviewed the position of the foul, and found that part of McBurnie’s foot was on the line of the penalty area. The line belongs to the box, which means it became a penalty review. Even though Fabinho got the ball, he also took McBurnie so this could not be a “clear and obvious error” by the referee so a penalty was awarded. If the VAR had decided the challenge was in the area but wasn’t a foul, play would have restarted with a dropped ball to Alisson.

Controversy rating 7/10 – This caused an outcry among Liverpool fans, who didn’t feel it was a foul by Fabinho and even argued contact wasn’t inside the box. As Liverpool went on to win the game, despite the penalty being scored by Sander Berge, the controversy wasn’t quite so fierce.

VAR rating 8/10 – A tough one to rate because, while the correct decision was reached in law, it is the kind of incident that fans find difficult to stomach. Would Dean have given the decision if he thought it would result in a penalty? We get the impression that, in general, fouls in the box seem to carry a higher threshold for officials than those outside.

What happened? Chelsea played a ball into box in the first half and Harry Maguire and Cesar Azpilicueta battled for the ball, with the Manchester United defender heading clear. However, replays showed that Maguire went over the top of Azpilicueta, with both arms around his shoulders, to get to the ball first. A holding offence is defined as “when a player’s contact with an opponent’s body or equipment impedes the opponent’s movement.”

What about the review? This took place in the background while play continued and the VAR, Stuart Attwell, quickly decided there was not enough in the challenge to warrant a penalty to Chelsea.

Controversy rating 9/10 – This was a crucial decision which could have handed Chelsea three points at Old Trafford. Attwell was too quick to move on and allow the play to restart when it did eventually stop.

VAR rating 2/10 – Referee Martin Atkinson may have been unsighted but Attwell should have picked up on a “serious missed incident.” What made matters worse is that Attwell, acting as referee, had given a very soft penalty for holding by Brighton’s Tariq Lamptey on Crystal Palace’s Michy Batshuayi just six days earlier.

What happened? Virgil van Dijk was played through on goal, and as he got to the ball Everton goalkeeper Jordan Pickford came rushing out and clattered into him with a wild challenge. However, the offside flag had already been raised against Van Dijk but Pickford could still have been sent off for serious foul play, defined as a “challenge that endangers the safety of an opponent or uses excessive force.”

What about the review? VAR official David Coote reviewed for a possible penalty by checking the offside. This showed he had acknowledged there was a possible foul by Pickford. However, once the offside was upheld Coote did not initiate a review for a possible red card missed by referee Michael Oliver and play restarted with a free kick to Everton.

Controversy rating 10/10 – Pickford should have been sent off for the challenge, and as Liverpool were 1-0 up just five minutes into the Merseyside derby they will feel they would have gone on to comfortably win the game. Added to that, Van Dijk was forced off injured with an anterior cruciate ligament injury which may well have ended his season.

VAR rating 3/10 – Okay, so the VAR got the offside review correct. But Coote’s failure to identify a red card — he also missed a clear red card as the VAR for a Giovani Lo Celso challenge on Cesar Azpilicueta in February — was a huge error and affected the outcome of the game. Coote was appointed as neither VAR nor referee for the following weekend’s games.

What happened? Liverpool thought they had a winner in the 92nd minute through Jordan Henderson, but the VAR disallowed the goal for offside against Sadio Mane, who had created the goal.

What about the review? The change to the handball law now means the shoulder and the top of the arm count for offside, and it was this that made Mane (and Van Dijk in the earlier incident) offside. Mane would have been onside under last season’s interpretation of offside.

Controversy rating 8/10 – This was the first time we had seen offside given from the new shoulder/arm point, so it’s understandable many fans could not comprehend how the goal had been disallowed. The angle, and the offside lines, were unclear on the VAR graphic, leading to added confusion.

VAR rating 6/10 – VAR gets a 6 here because protocol was followed correctly. However, as the offside technology cannot be considered 100% reliable there will always be questions offside to such small margins — especially when emotional, match-winning goals are ruled out.

What happened? Andy Carroll rose to head a cross into the box in the 93rd minute, which was blocked by Eric Dier, who had his arm raised above his shoulder. A penalty was awarded and Callum Wilson scored a dramatic 97th-minute equaliser.

What about the review? The referee, Peter Bankes, did not spot the infringement but was advised to check a possible handball by the VAR, Lee Mason. As the handball law was being more strictly enforced in the Premier League following pressure from FIFA, it was always going to be a penalty. Dier had his back to the play, so could not see the ball when it hit his arm — but there is no dispensation in law for this.

Controversy rating 10/10 – This was a watershed moment, the fifth handball penalty awarded by the VAR just three weeks into the season. It caused by far the most controversy and a huge media backlash, effectively leading to a relaxing of the handball interpretation in general to reduce the number of penalties. Ironically, however, this kind of incident would still be a penalty under the revised interpretation.

VAR rating 10/10 – Like it or not, this was perfect VAR. Whatever we may think about the law itself, it is the law and the referees have to follow it. FIFA says there is no room for leeway on handball when a defender has his arm above shoulder height — regardless of any intent.

What happened? Chelsea had been 3-0 down at West Brom after just 27 minutes, but stormed back in the second half to take a point through Tammy Abraham’s 93rd-minute goal.

What about the review? The VAR, Darren England, checked for a handball against Kai Havertz. The ball had hit the midfielder’s arm and dropped to Hal Robson-Kanu, whose failed clearance only reached Mason Mount — his shot was parried by goalkeeper Sam Johnstone and Abraham tapped in.

Controversy rating 6/10 – This was the first time a goal had been allowed following a handball which almost certainly would have been ruled out last season. A law change now requires immediacy of the handball to the goal — so the ball must fall straight to Mount rather than there be a failed clearance from Robson-Kanu first. The confusion over attacking and defensive handball means many fans could not understand how this could be allowed yet soft penalties were being awarded for very similar offences.

VAR rating 10/10 – The VAR checked to make sure Havertz’s handball wasn’t deliberate, which could have ruled out the goal. It wasn’t, so the check was swift with no need for a lengthy stoppage.

Argentina legend Diego Maradona’s passing will be mourned across South America
Decimated by injuries, Liverpool remind title challengers that they remain firm favourites
How to get married and play in a semifinal on the same day!
Liverpool’s Jota earns 7/10 vs. Brighton but Robertson gets 5/10 after late penalty
Dynamo Kiev vs. Barcelona – Football Match Report – November 24, 2020