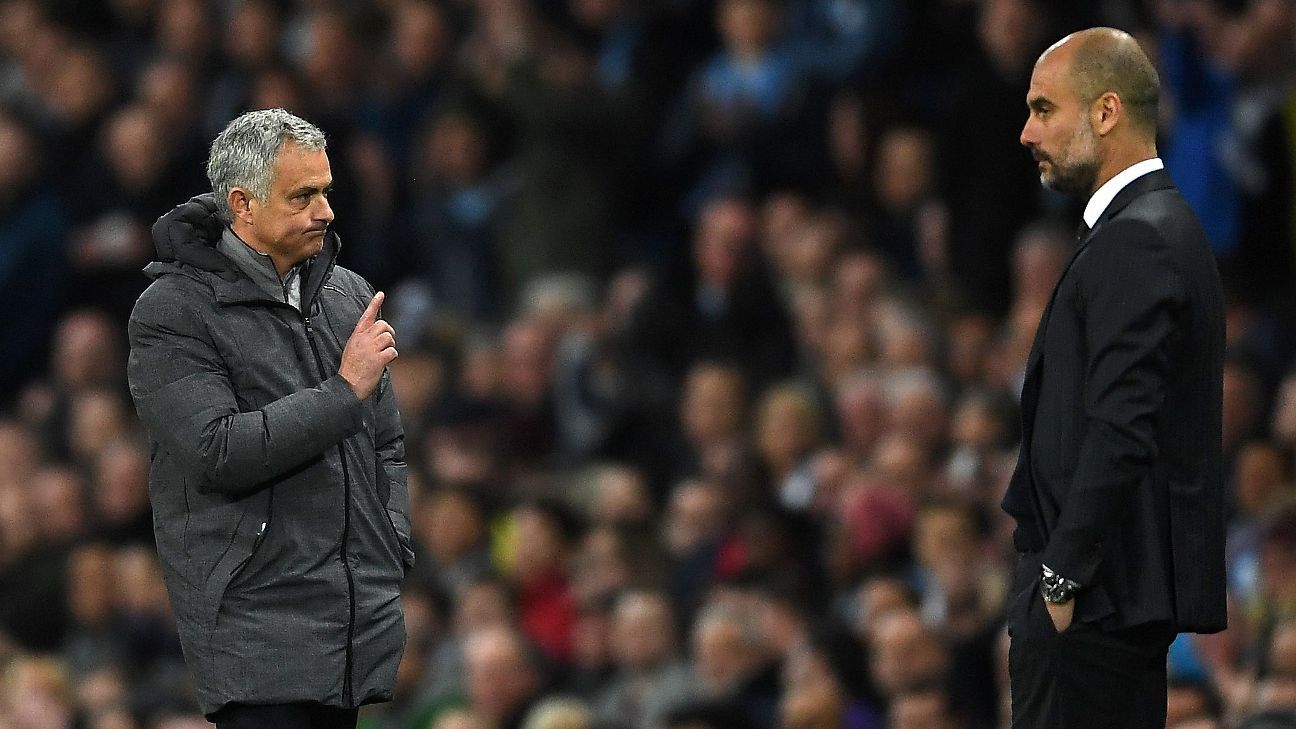 
They do things differently in Manchester. City and United are two clubs working toward different directions, and their methods are so distinct that they are almost polar opposites.

On one side of town, City are playing with a joyful, sweeping brilliance. They have turned the Etihad into a temple of entertainment. A handful of miles away at Old Trafford, United are built around power and mean-eyed pragmatism with few frills in their approach. What the neighbours have in common, however, is that they are unbeaten in the Premier League. Early indications are that the title battle will be conducted in a small area of the northwest, and as disparate as these teams are, they are on a collision course.

City’s performances have been seductive. The latest, a 7-2 rout of Stoke City, has generated a whirlwind of superlatives, and there are already suggestions that Pep Guardiola’s team could go unbeaten through the Premier League season. A year ago, after City won their first six league games, there were similar predictions, but Guardiola’s team went on to finish third, 15 points behind Chelsea.

After a transfer window in which the club spent £225 million, Guardiola’s squad is stronger than it was 12 months ago. To imagine that they are unbeatable is a mistake, though. As good as they are, City have a number of flaws.

Guardiola has clear ideas about how he wants his team to perform. The side is packed with attacking players who press the opposition deep in enemy territory. Gabriel Jesus, Leroy Sane and Raheem Sterling are quick and skillful on the ball, but Guardiola values their work rate in squeezing defenders almost as much as their ability to score. The manager believes the side is better without Sergio Aguero, the club’s most clinical goal scorer, because the 29-year-old is less inclined to chase down opposition ball carriers.

Guardiola believes the team functions more effectively with his younger forwards harrying defenders. That’s because when that front line puts the opposition back four under pressure close to their own goal, it allows City’s defence to push up and play a high line. The former Barcelona boss wants to condense play in the opponents’ half so that David Silva and Kevin De Bruyne can find space with which to strike. Silva’s awareness and touch with the Belgium international’s explosiveness make them a formidable threat.

The flaw in the system is that it means City often operate with just one dedicated midfielder, Fernandinho. Against stoke, full-backs Kyle Walker and Fabian Delph (the latter in a make-shift role) tucked in to supplement the middle of the park and make sure the midfield are not overrun.

The policy has worked well in the Premier League. City have racked up 27 goals and beaten two of their top-six rivals. However, even when Guardiola’s men concertina the game into their attacking half, there is still a lot of empty space between the defenders and the attackers. Better sides will exploit this room and take charge of the midfield. If teams can get a foothold in the centre of the park, they can get at City. Before Sadio Mane was sent off at the Etihad, Liverpool troubled Guardiola’s team by breaking behind the full-backs and running at the centre-backs. The home side ran out 5-0 victors in the end but suffered quite a few hairy moments in the early exchanges.

On a week-to-week basis, City will sweep aside domestic adversaries, but smarter, more sophisticated sides might see Guardiola’s tactics as naive.

Napoli will present the first serious test for City in the Champions League. The Serie A leaders have had an even better start to the season than their English counterparts, going unbeaten in eight games. Maurizio Sarri’s side invariably adopt a 4-3-3 system with Marek Hamsik, Allan and Jorginho forming a compact unit in the middle. Up front, Dries Mertens and Lorenzo Insigne could take advantage of City’s weakness in defence.

For all Guardiola’s spending in the summer, the back line still looks uncertain. Delph has been co-opted as a makeshift left-back following Benjamin Mendy’s long-term injury, while John Stones and Nicolas Otamendi still show signs of uncertainty at the heart of the back four. The suspicion remains that at some point City’s defence will undermine their brilliant forward line.

Napoli’s “Sarri football,” with its more balanced approach, should give Guardiola’s side their first real examination. The Italians have a solid defence, a structured framework that will not be easily pulled out of position and sufficient pace up front to exploit the running room behind City’s high line.

Mourinho’s approach is very different, and where City have drawn praise, United have engendered scorn. Their performance at Anfield in the 0-0 draw with Liverpool was generally derided as United seemed to show scant ambition and were more interested in killing the game. Mourinho was delighted to take a point and took malicious pleasure in quashing any sense of entertainment.

The 54-year-old former Chelsea manager is a curmudgeon; at times he looks like a relic of another generation compared to the likes of Guardiola, Jurgen Klopp, Antonio Conte and Mauricio Pochettino. Last season, Mourinho was significantly more successful than everyone except Conte. He brought two trophies to Old Trafford and pulled a Champions League spot out of the bag by winning the Europa League despite finishing sixth in the table.

Mourinho gets things done no matter how many people he alienates. He is up to mischief off the pitch, too, flirting with Paris Saint-Germain in what seems to be a fairly transparent attempt to gain more power over the transfer policy at Old Trafford.

Mourinho has also spent big in the two summers he has been in Manchester, both literally and figuratively. United’s outlay of more than £300 million has been spent almost completely on players with significant physical power. The only Mourinho signing who is not a 6-footer is Henrikh Mkhitaryan. This has been a manager shopping for power as well as pace.

If City aim to dazzle the Premier League, United plan to bully it. When they cannot compete with speed (as at Anfield), they concentrate on neutralizing the opposition. City give rival sides a chance to play against them, while Mourinho’s side browbeat lesser teams and turn difficult matches into wars of attrition.

For all the sneering aimed in the United manager’s direction, he’s had repeated success in England, and none of the pretenders to his crown have landed too many blows on Mourinho yet. City’s 29 league goals have provoked gushing praise, but United’s tally of 21 is impressive, too. Up until the Liverpool game, Romelu Lukaku & Co. were averaging three goals a game in the league: pretty impressive for a team that had been lambasted as negative.

The battle of philosophies will continue in Manchester. The first derby is not until December, and any flaws in their managers’ approaches are likely to be highlighted by the time the game comes around.

Despite all the excitement surrounding City, flamboyance does not necessarily lead to titles; after all, Mourinho has spent a career proving this. Guardiola has a real battle on his hands in the quest to rule Manchester.