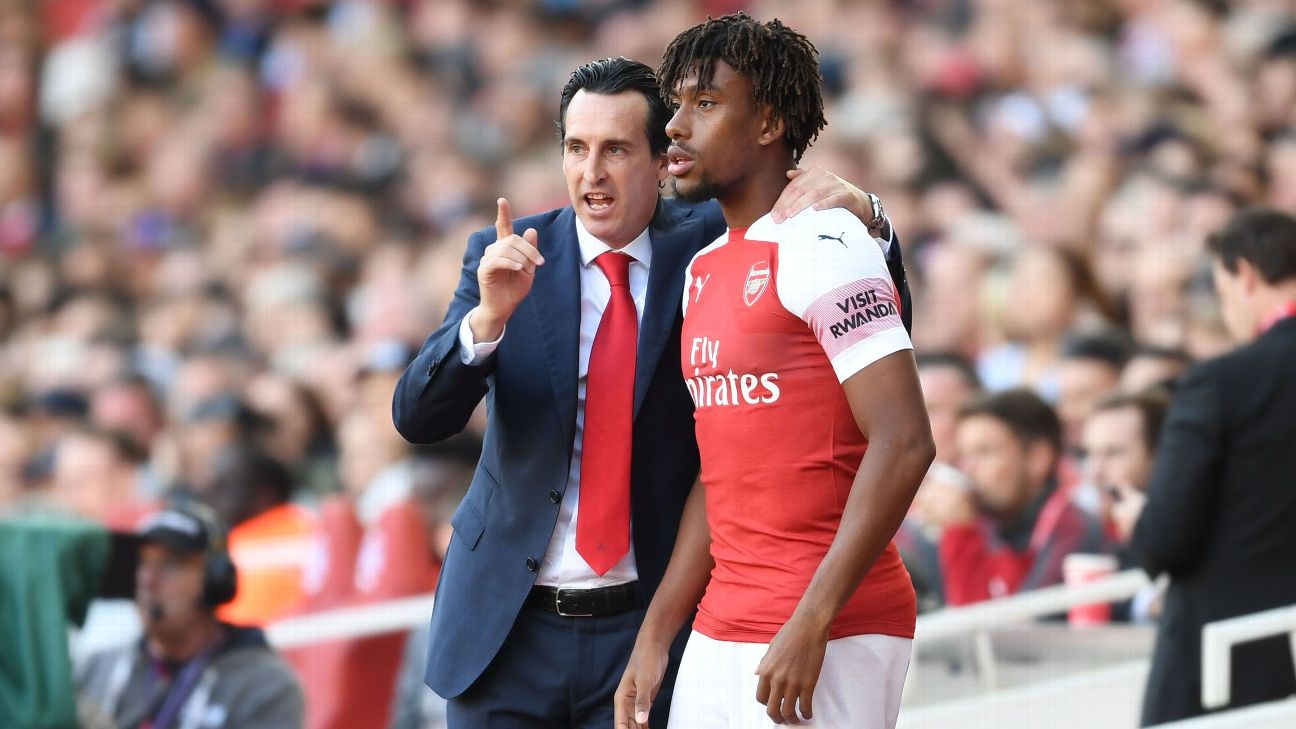 
English football is bad for your health. According to a study in the British Journal of Sports Medicine, teams that play in leagues without a winter break lose players to, on average, 303 more days of injuries than their contemporaries in competitions that take time off around Christmas and New Year’s. This weekend also sees the fourth round of the FA Cup, another competition for England’s top clubs to worry about when it comes to their squads.

Given the shortened World Cup summer and the newly added strain of competitive matches in the UEFA Nations League, you might think that Premier League managers were doing everything possible to keep their players fresh this season. You, however, would be wrong.

Through 23 games, there have been a total of 91 unused substitutes in the Premier League. While both Liverpool manager Jurgen Klopp and his Manchester City counterpart Pep Guardiola have both complained about the fixture-bloat in the English game, neither one has used all 69 substitutions afforded to him this season.

The premier practitioners of juego de posicion and gegenpressing might have revolutionized the way the British game is played, but like most of the other managers in the Premier League, they’ve shown little desire to innovate against the idea of traditional substitution patterns.

Think of how the average Premier League game plays out. Depending on the manager, the first sub comes somewhere around the 60th minute. Then maybe there’s another sub somewhere around the 70-80 minute mark, and then potentially a third move in the dying moments of the match. Rarely does the strategy seem pre-planned, and most subs come on as an injury replacement, as a like-for-like swap for a player who’s performing poorly, or as a defense-for-offense or offense-for-defense exchange to either close a deficit or shut down a game.

“If they have a good sports science team, managers should know whether a player can go 60 minutes or 90 on the day,” said Daniel Altman, founder of the consultancy North Yard Analytics. “Optimally, managers make substitutions punctually, so that they never have a severely fatigued player on the field.

“It’s like in baseball; even if a pitcher throws six good innings, that doesn’t mean he has a seventh in him. Also, it’s usually good to be the first mover with tactical changes: challenge the other manager and make him react rather than vice versa.”

Among the top six teams in the league, only Arsenal’s Unai Emery has emptied his substitution holster in every match. (Jose Mourinho also used all of his subs, but that seemed more like it was out of some combination of displeasure and desperation rather than any kind of strategic foresight.)

Meanwhile, the stingiest substitutor of the Big Six is Tottenham’s Mauricio Pochettino, who has made just 62 out of a possible 69 changes. Of the Premier League managers who have been on the sideline for all 23 matches this season, only Crystal Palace’s Roy Hodgson, Burnley’s Sean Dyche and Newcastle’s Rafael Benitez have given less playing time to substitutes than Pochettino.

The big difference, of course, is that none of those teams has played more than 31 games this season. With the Champions League and an extended League Cup run, Spurs have already played 34 matches. Superstars Harry Kane and Dele Alli recently both went down with long-term injuries, while squad players like Victor Wanyama, Moussa Sissoko, and Lucas Moura are all on the shelf, too. Did Pochettino substitution stinginess lead to the club’s current injury crisis? Well, it certainly hasn’t made the team any better.

NCAA soccer isn’t necessarily a breeding ground for innovation. I played four years of relatively unspectacular Division I collegiate soccer at Holy Cross in the United States, and most coaches are worried about job security, so they trot out the most conservative tactics imaginable. The best American kids don’t typically go to college, so the skill level isn’t as high as it could be. And even though pretty much everyone is between 18 and 21 years old, the average program isn’t too concerned about talent development.

But there was one specific game that, though meaningless at the time, feels important in hindsight.

In my senior year, we played against the Naval Academy on an unseasonably warm, late-October Sunday afternoon in Annapolis, Maryland. The military academies never had particularly good teams and we expected to win… until about midway through the first half, when Navy’s coach subbed off nearly the entire starting XI at once.

NCAA rules essentially allow an unlimited number of substitutions — the official rulebook says “Either team may substitute up to 11 players at a time… ” — and the only restrictions are that if you’re subbed out in the first half, you can’t come back until the second half, and if you’re subbed out in the second half, you can only re-enter the game once. All in all, Navy used 21 different players over the course of the game.

At the time, it felt like they were cheating, using some bush-league gimmick to twist the rules just enough to eke out a win. But really, they were just making up for a lack of talent, and my disgruntled sentiment echoes the responses of coaches in other sports to the development of newer, more optimal ways of playing their games. So, while FIFA rules prohibit professional soccer managers from ever replicating that kind of full-squad turnover, why shouldn’t they try something similar when it comes to their substitutions?

Players will either tire as the game goes on or they’ll conserve their energy knowing that they have to play 90 minutes. If a player goes into a match knowing he’s going to play only an hour, he can max out his effort over that stretch before being replaced by a player with fresh legs who gets to run around against a bunch of tired opponents.

By not using all three subs earlier in a match, managers are taking a hit in two directions: They lose out on the upside of the effect of three high-energy players and they get hit by the deteriorating performances of the players they’re not subbing out sooner.

“When managers think a match is going well, they’re afraid to change the team,” Altman said. “Unless they have no one fit on the bench, this just means that the opposition will have fresher legs for the later stages of the game; it’s like going into the final round of a boxing match with one hand tied behind your back.”

If the logic behind it is clear, why don’t managers make more aggressive use of their subs?

“I would guess the reason is that doing this will result in them sometimes being left short if a player gets injured,” Trainor said. “If that did happen, I would imagine the manager would take serious flack for having the temerity to buck the trend and go against common conventional thinking. So by being prudent, as managers currently are, it means that rarely do teams end up with less than a full complement of players. It’s kinda like not going for it on fourth down in the NFL.”

On top of that, managers will have to convince their players that a place in the starting lineup doesn’t mean what it used to, or that being subbed out early doesn’t mean you’ve failed. Right now, getting replaced at half-time is perceived as a fate worse than death, but despite all the ingrained skepticism, there might finally be some progress happening this season.

In four consecutive Premier League games from Dec. 2-16, Emery made at least one sub at half-time. According to Statsbomb data, through 16 games, Emery was the most aggressive manager in the league, with his average substitution coming in the 63rd minute. (The least aggressive personnel handler in England? Hodgson, whose average sub occurs all the way in minute 76.) Emery has given more playing time to substitutes than any manager in the league, most notably finding success with soon-to-be-departing Aaron Ramsey, who has two goals and four assists in 235 substitute minutes.

Elsewhere this season, Chelsea’s Eden Hazard briefly terrorized teams as a sub in the first few games of the season. Wolverhampton’s Adama Traore, who’s played more substitute minutes than anyone in the league, has been a dribbling menace off the bench: He’s fifth in the Premier League in completed take-ons despite playing only 670 minutes, while everyone else in the top five has played at least 1,650. In 150 substitute minutes, Liverpool’s Xherdan Shaqiri has an assist and three goals, including an off-the-bench brace in the 3-1 mid-December win against Manchester United. Meanwhile, Borussia Dortmund’s Paco Alcacer is second in the Bundesliga in goals (12) despite starting just five matches.

As analytical thinking continues to seep slowly into the game, perhaps those average substitution times will start to creep even closer to half-time. A study from Villanova professor Bret Myers suggests that the first sub should come before the 58th minute, the second before the 73rd minute and the third before the 79th. Trainor has even floated the radical-seeming idea of subbing a player in the 30th, at half-time, and in the 60th minute. Altman also thinks managers should consider subbing multiple players at once.

“Alex Ferguson used to do this by replacing Andy Cole and Dwight Yorke with Teddy Sheringham and Ole Gunnar Solskjaer,” Altman said. “Two strikers off, two completely different strikers on.”

His example might provide a sliver of hope for Manchester United fans still skeptical of the club’s new manager: If a Patriot League coach and Sir Alex Ferguson can both do it, then why not him? Solskjaer already knows it works. Six league games in, he hasn’t just won all 18 points. He’s used all 18 subs, too.