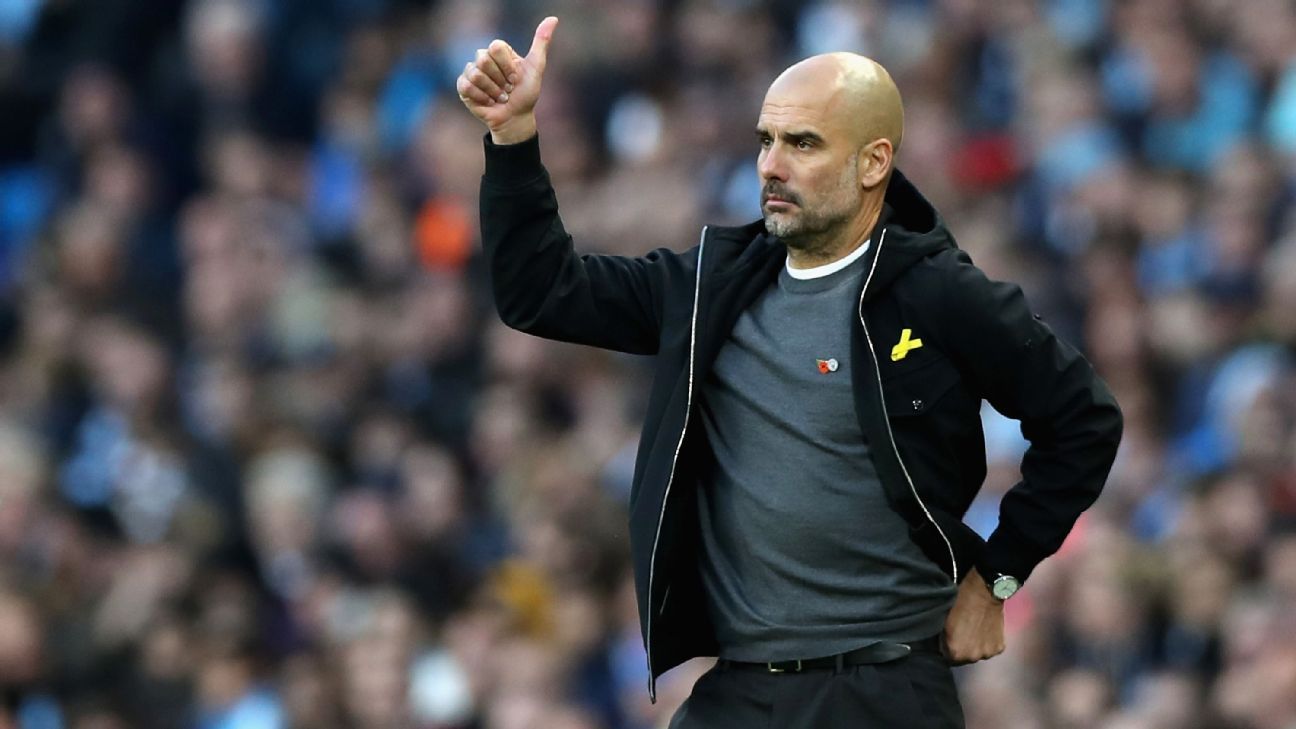 
Given he pushed his players up, went for the win on the road and lost 1-0 at Chelsea, hindsight suggests Jose Mourinho might have been better sticking to his principles. The gap between Manchester United and Premier League leaders Manchester City is eight points, and while not an irreversible deficit — it’s only November, for goodness sake — it does rather suggest that Pep Guardiola is having a more satisfying second season in England than his longtime rival.

Manchester City are wonderful with the ball. They move quickly, they pass with clinical accuracy and they have the potential not just to beat anyone in the league, but humiliate them. And yet it’s what they do without the ball that really impressed on Sunday, especially in the first half. Arsenal were desperate to play out from the back, but City kept three men up to close down Petr Cech’s options. The Gunners were desperate to pass the ball among themselves, but City wouldn’t let them. Pep Guardiola’s men slackened off for a period in the second half but had enough about them to regain control, albeit with the help of the match officials. The leaders have got some team.

Happiest manager of the weekend

Antonio Conte has come under heavy scrutiny in recent weeks. Reports of a growing divide with the senior hierarchy at Chelsea refuse to go away and the clown-car defending in Rome in midweek only intensified the pressure. That Champions League disaster was believed to be the reason for David Luiz’s absence from the matchday squad, a high risk move by the manager. But it paid off; Man United were more aggressive and open than anyone expected, but Chelsea had the most of the possession and the chances. Indeed, Conte was so pleased with the performance that he completely forgot to shake Mourinho’s hand.

Unfolding endgame of the weekend

The eagerly-awaited sequel to last week’s farce, when West Ham lost two points at Crystal Palace because they failed to hold the ball at the corner flag, had the critics rolling in the aisles and fans striding up them to leave the stadium. The Hammers were apparently unaware that Liverpool are quite good at counter-attacking, and when their decision to push almost everyone up for an early corner left poor Aaron Cresswell as the only defence against a breakaway from Sadio Mane and Mo Salah, there was only one outcome. There were other errors by Slaven Bilic’s side, but we’re on a word count here.

Unlikely plot twist of the weekend

The impending demise of Bilic isn’t exactly unexpected, but his mooted replacement? Now that’s a bit of a surprise. David Moyes has been trapped in a hideous career decline for four-and-a-half years, leaving a trail of devastation in his path. He failed at Manchester United, he failed at Real Sociedad and he failed at Sunderland. While the more cruel of our readers might suggest that actually makes him perfect for West Ham, it’s the sort of recruitment strategy that goes beyond a gamble and into a whole new territory of risk. We’ll watch with interest.

Sinking feeling of the weekend

Swansea’s supporters must have thought they’d seen the last of relegation battles for a while. They had a manager they trusted in Paul Clement, they made two exciting loan signings in Tammy Abraham and Renato Sanches and they looked ready to step up. Instead, they’ve slipped back down. Clement will be furious at the ease with which Glenn Murray scored Brighton’s winner, but he’ll be just as upset with his side’s lack of threat at the other end. Only Crystal Palace have scored fewer than Swansea’s seven, and none have taken fewer shots. Swansea need to turn this around quickly.

With just one goal and only a handful of shots on target from both teams, there wasn’t a lot of entertainment on offer when Huddersfield hosted West Brom. But Rajiv van la Parra certainly made up for it with an absolutely incredible hit just before half-time. West Brom made the mistake of standing off and giving him time, and the Huddersfield man took possession, looked up and then sent the ball screaming into the top corner. There’s one for the goal of the month competition.

Debut of the weekend

When we saw Paulo Gazzaniga clattering off his line after two minutes, arms outstretched like a starfish fired from a cannon, missing the ball by distance and clouting Mamadou Sakho, we did fear the worst for Tottenham. The Argentine goalkeeper didn’t have the happiest of times at Southampton, and even as a third-choice option, his move to Spurs in the summer was still a surprise. But Gazzangia settled, made a series of fine saves and won the man of the match award in a crucial 1-0 win. So we’re sorry for doubting him.

One to watch the weekend after next

It’s always the same: You get used to Arsenal picking up results, you start to forget their moments of weakness, you see the quality in their ranks and you think: “Hey, maybe they can still mount a challenge.” And then they play a team like Manchester City, and you see the gulf between Wenger’s men and the real contenders for the crown. Unfortunately for Arsenal, Spurs are among that number and will visit the Emirates when club football resumes after the international break. Arsenal have a 100 percent winning record at home in the league this season, but if they still have one after that game, it’ll be a surprise.