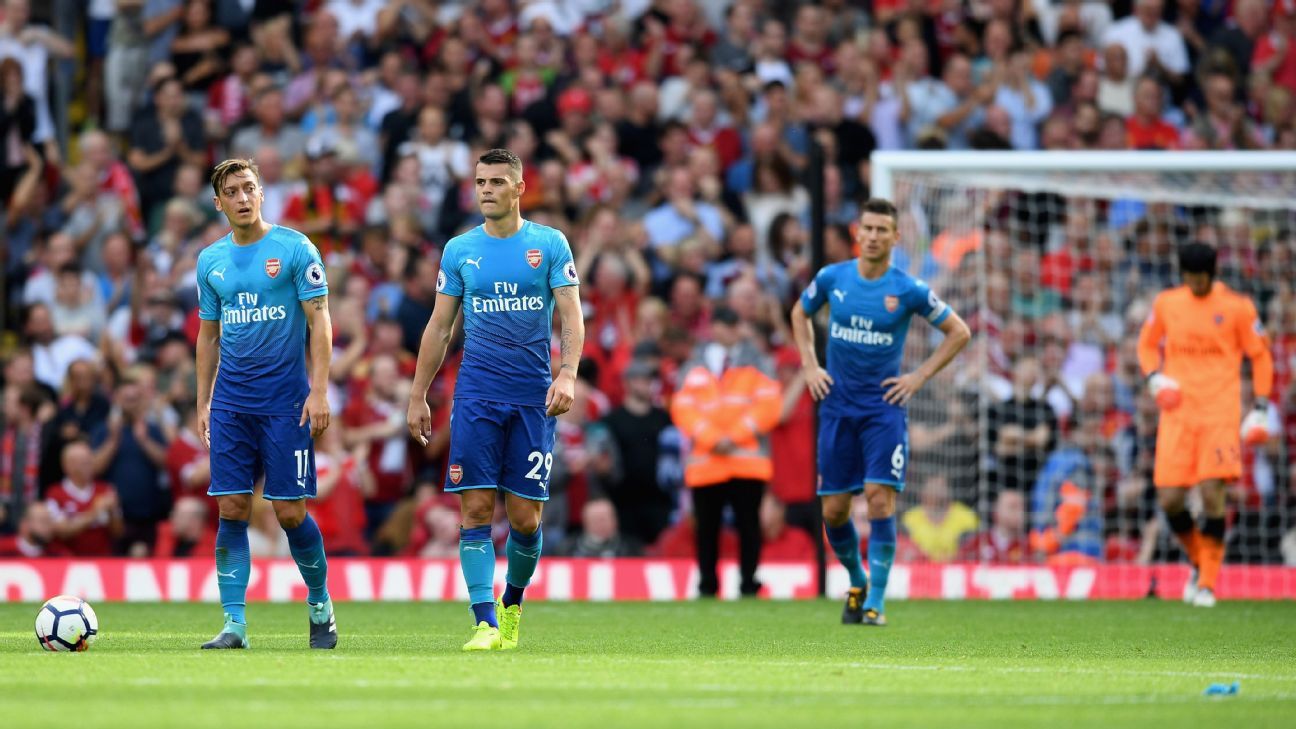 
There will be those who feel that there is nothing left to discuss when it comes to Arsenal but the truth is that for the next two weeks, very little will be discussed except Arsenal. The defeat at Liverpool was comfortably the worst that the Gunners have had in many years; yes, that includes the 8-2 defeat at Man United, six years ago on Monday. At least they looked upset by that one, whereas this latest implosion was just a sad, spineless capitulation.

Still, it’s not all bad, is it? At least Spurs dropped points. That’s got to be some consolation, right? Right? Oh.

Performance of the week

It was one of those games, after which you have to ask: Were Arsenal that bad or were Liverpool that good? So let’s nail that right away: Arsenal were that bad. But Liverpool deserve appropriate praise. They really should have scored more than they did, but they attacked with devastating pace and tore Arsenal to pieces. You still worry about Jurgen Klopp’s defence at the back and Loris Karius’ repeated dawdles on the ball were unhelpful, but, once again, Liverpool showcased their ability to destroy teams.

Worst day at the office in more than 20 years

Sometimes it must be quite difficult to be a pundit. You’re paid for instant reaction, but must question yourself constantly. Is there something I haven’t seen? Am I being too harsh? Thanks then must go to Arsenal for providing the world’s most cut-and-dried game of football, a performance of such disgusting ineptitude that it was impossible to be too scathing about their uselessness. Pile in, say whatever you like, do not fear to cause offence. After all, nothing could be more offensive than that showing.

Worst day at the office, apart from that

But let’s move on and seek fresher targets. Crystal Palace did not lose 2-0 at home to Swansea because they are adapting to a new system. They lost because they were substandard in every department and that should terrify new manager Frank de Boer. Off the ball, they were passive and allowed Swansea to pass around them with impunity. On it, their passing was slow and predictable. With three straight defeats and not a single goal scored, theirs has not been an auspicious start.

So close and yet…

Tottenham were seconds away from wiping out that daft talk of a Wembley curse and then new Burnley signing Chris Wood popped up to swipe two points straight out of their fingers. It’s funny; you look at those “Harry Kane can’t score in August” and “Spurs can’t win on a slightly bigger pitch” columns and you think: Stop being silly, it’s football and there’s no such thing as a curse and these are merely unfortunate statistical outliers that will be straightened out in the fullness of time. And yet…

Three games, three defeats, 10 goals conceded: Beleaguered West Ham boss Slaven Bilic will flinch every time his phone rings this week. He was under enough pressure toward the end of last season as the Hammers struggled desperately for consistency, but a grim 3-0 defeat at Newcastle feels like the beginning of the end. This is not a club that sacks managers lightly — they’ve only had eight in the Premier League era — but it’s getting harder and harder to see any way back for Bilic now.

On reflection, Chelsea might be OK after all. Two weeks on from that horror show at home to Burnley, the champions have picked up two big wins against two big opponents. Antonio Conte’s team were rarely troubled by Everton, a team that was supposed to be putting serious pressure on the accepted order of the top six. Concerns about depth in the Stamford Bridge squad remain and, if Chelsea pick up more injuries than last year they’ll be in bother, but I think we can rule out a bottom-half finish now.

Questions need to be asked of all relevant parties involved in the fracas following Man City’s winner at Bournemouth. Did Raheem Sterling need to be booked when he hadn’t left the pitch? Did a supporter really need to be placed in a wrist-lock when he entered it? What happened between the allegation of an assault on a steward by Sergio Aguero and its subsequent retraction? Beyond the release of clear video footage of the incident. Surely things could have been handled better?

Goal of the day

There is a primal euphoria that follows a certain kind of goal, a feeling that natural laws have been bent by human force. It is the same euphoria our ancestors felt when they felled a mammoth and it appeals to all. The ball has to be struck perfectly, rising and accelerating even after it’s crossed the line, while any kind of angle helps and, if it can hit the woodwork on the way in, that’s perfection. Even Pep Guardiola enjoyed Charlie Daniels’ goal. Indeed, even people who don’t like football enjoyed Charlie Daniels’ goal.

Perhaps the most surprising aspect of Miguel Britos’ dismissal against Brighton was that the Watford defender apparently didn’t think he should be dismissed. In this, he was very much alone. You do not tackle anyone by jumping in the air and kicking at him as if he was a piece of old furniture you were trying to break up to fit in the bin. Had Anthony Knockaert’s leg been on the ground at the moment of impact, the doctors would still be trying to reattach it. What on earth was Britos thinking?

Arsene Wenger has two weeks to put things right and he couldn’t ask for a more straightforward opportunity than Bournemouth at home on Sep. 9. Eddie Howe’s side don’t really know how to keep it tight at the back and are far more comfortable attacking, even if that does leave gaps. However, on the other hand, if Arsenal were to somehow lose this fixture, what then? Don’t miss this one.